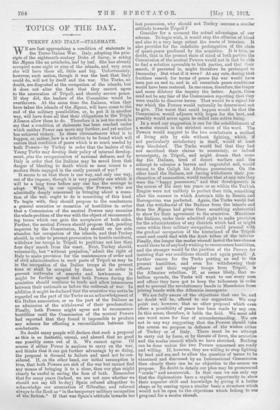 WE are fast approaching a condition of stalemate in the Turco-Italian War. Italy, adopting the prin- ciple of the eighteenth-century Duke of Savoy, is eating the .lgean like an artichoke, leaf by leaf. She has already occupied some eight or nine of the islands, and very soon she will have them all, little and big. Unfortunately, however, such action, though it was the best that Italy could do, will not by itself end the war. The Turks, no doubt, are disgusted at the occupation of the islands, but it does not alter the fact that they cannot agree to the annexation of Tripoli, and thereby secure peace. If they did, the leaders of the Committee would be overthrown. At the same time the Italians, when they have taken the islands of the lEgea,n, will have come to the end of the military possibilities, or, to put it in another way, will have done all that their obligations to the Triple Alliance allow them to do. Therefore it is not too much to say that a condition of stalemate has been reached under which neither Power can move any further, and yet neither has achieved victory. In these circumstances what is to happen, or, rather, how is a solution to be found which will restore that condition of peace which is so much needed by both Powers—by Turkey in order that the leaders of the Young Turks may develop their policy of internal develop- ment, plus the reorganization of national defence, and by Italy in order that the Italians may be saved from that danger of bleeding to death which so soon comes to a modern State engaged in the costly pursuit of war?

It seems to us that there is one way, and only one way, out of the impasse, though it is very possibly one which it will be a long time before any one has the courage to adopt. What, in our opinion, the Powers, who are admittedly deeply concerned in bringing about a cessa- tion of the war, ought to do is something of this kind. To begin with, they should propose to the combatants a general armistice or cessation of hostilities in order that a Commission of the neutral Powers may examine the whole problem of the war with the object of recommend- ing terms which can gain the acceptance of both sides. Further, the neutral Powers should propose that, pending inquiries by the Commission, Italy should on her side abandon her occupation of the islands, and that Turkey should, in order to prevent provocation to hostile incidents, withdraw her troops in Tripoli to positions not less than four days' march from the coast. Next, Turkey should, voluntarily, but " without prejudice," admit the right of Italy to make provision for the maintenance of order and of civil administration in such parts of Tripoli as may be in the occupation of the Italian troops at the present time or shall be occupied by them later in order to prevent outbreaks of anarchy and lawlessness. It might be further agreed that both Powers during the armistice should continuo to trade and allow intercourse between their nationals as before the outbreak of war. In addition it might be declared that the armistice was not to bo regarded on the part of the Turks as an acknowledgment of the Italian annexation, or on the part of the Italians as an admission of the withdrawal of their proclamation. Finally, both Powers might agree not to recommence hostilities until the Commission of the neutral Powers had reported that they found it impossible to produce any scheme for effecting a reconciliation between the combatants.

No doubt many people will declare that such a proposal as this is so fantastic, unreal, and absurd that no good can possibly come out of it. We cannot agree. Of course if either Power is anxious to carry on the war, and thinks that it can get further advantage by so doing, the proposal is doomed to failure and need not be con- sidered. If, on the other hand, our initial assumption is true, that both Powers are sick of the war but cannot find any means of bringing it to a close, then our plan might clearly be useful in saving the face of both. Remember that for many years (indeed, we are not sure whether we should not say till to-day) Spain refused altogether to acknowledge our annexation of Gibraltar, and referred always to the Rock as " in the temporary military occupation of the British." If that was Spain's attitude towards her lost possession, why should not Turkey assume a similar attitude towards Tripoli ?

Consider for a moment the actual advantages of our scheme. To begin with, it would stop the effusion of blood and also to a very large extent the waste of treasure. It also provides for the indefinite prolongation of the state of quasi-peace produced by the armistice. It is true, no doubt, that in the present state of mind of both parties the Commission of the neutral Powers would not in fact be :Lble to find a solution agreeable to both parties, and that their search, if persisted in, might therefore be prolonged to Doomsday. But what if it were ? At any rate, during that fruitless search for terms of peace the war would have been put an end to, and in all essentials peace conditions would have been restored. In one sense, therefore, the longer and more dilatory the inquiry the better. Again, there need not be any fear of the Commission reporting that they were unable to discover terms. That would be a signal for war which the Powers would naturally be determined not to give. The worst that could happen would be that the Commission would adjourn with hopes for the best, and possibly would never again be called into active being.

In a word our suggestion is one for the establishment of modus vivendi in the strictest sense of the word. The Powers would suggest to the two combatants a method of living side by side without fighting, which, if not particularly satisfactory in itself, would at least stop bloodshed. The Turks would feel that they had not sacrificed their claims to suzerainty, or indeed sovereignty, in Tripoli, and might dream that some day the Italians, tired of desert warfare and the attempt to colonize a barren and ungrateful soil, would return to the Caliph his African possessions. On the other hand the Italians, not having withdrawn their pro- clamation of annexation, would realize that at any rate they were the " happy possessors," and that developments in the course of the next ten years or so within the Turkish Empire were not unlikely to perfect their title, something after the manner in which Austria's title to Bosnia and Herzegovina was perfected. Again, the Turks would feel that the withdrawal of the Italians from the islands and from the iEgean had given them something substantial to show for their agreement to the armistice. Meantime the Italians, under their admitted right to make provision for the administration of any districts which had or might come within their military occupation, could proceed with the gradual occupation of the hinterland of the Tripoli coast and could deal with the Arab tribes of the interior Finally, the longer the modus vivendi lasted the less chance would there be of anybody wishing to recommence hostilities, and the stronger would be the position of the Powers for insisting that war conditions should not again prevail. .A. further reason for the Turks putting an end to the present hostilities, and even for withdrawing their officers and their regular troops from Tripoli, is the Albanian rebellion. If, as seems likely, that re- bellion spreads, the Turks will want to use every man and officer they have got to keep the tribesmen in order and to prevent the revolutionary bands in Macedonia from joining hands with the Albanian insurgents.

We are fully aware of the objections that can be, and no doubt will be, offered to our suggestion. We may point out, however, that no other proposal which even offers a possibility of peace has been made by any one. In this sense, therefore, it holds the field. We must add one word more for fear of misunderstanding. Wo are not in any way suggesting that the Powers should take the course we propose in defiance of the wishes either of Turkey or of Italy. There must be no attempt to carry out by force, or by threats of force, the armistice and the modus vivendi which we have sketched. Nothing can be done unless the two Powers concerned are ready and willing. If, however, they are willing to stop fighting by land and sea and to allow the question of terms to be examined and discussed by an International Commission then clearly there can be no objection to the course we propose. No doubt in details our plan may be pronounced. " crude " and amateurish. In that case we can only say that the diplomatists have a capital opportunity to show their superior skill and knowledge by giving it a better shape or by rearing upon a similar basis a structure which would not be open to the objections which belong to our proposal for a modus vivendi,