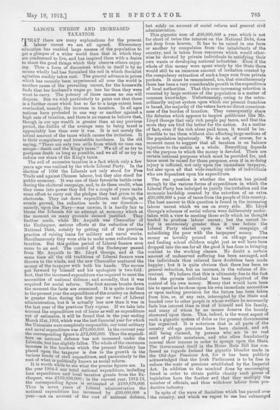 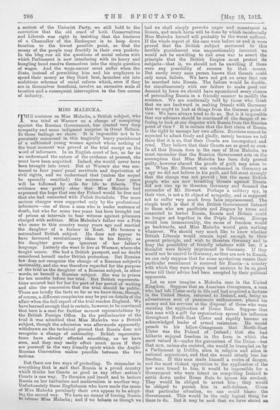 Page 5, 18 May 1912 — LABOUR UNREST AND INCREASED TAXATION. T HAT there are many explanations
Close

LABOUR UNREST AND INCREASED TAXATION. T HAT there are many explanations

for the present labour unrest we are all agreed. Elementary education has enabled large masses of the population to got a glimpse of a wider world than that in which they are condemned to live, and has inspired them with a desire to share the good things which they observe others enjoy- ing. Thus a form of discontent which in itself is by no means wholly bad has furnished the soil in which Socialist agitation readily takes root. The general advance in prices which has recently been experienced all over the world is another cause of the prevailing unrest, for the housewife finds that her husband's wages go less far than they were wont to carry. The potency of these causes no one will dispute. But we wish particularly to point out that there is a further cause which has so far to a large extent been overlooked, namely. the increase in taxation. In all ages nations have protested in one way or another against a high rate of taxation, and there is no reason to believe that, though in our age wealth is greater than at any previous period, the dislike of the average man to being taxed is appreciably loss than ever it was. It is not merely the actual amount of the taxes which causes the irritation. It is their compulsory and irresistible incidence. In the old saying, " There are only two evils from which no man can escape—death and the King's taxes." We all of us try to postpone death as long as possible, and we all of us try to reduce our share of the King's taxes.

The evil of excessive taxation is a fact which only a few years ago was realized by the whole Liberal Party. In the election of 1906 the Liberals not only stood for Free Trade and against Chinese labour, but they also stood for dublic economy. It was one of their favourite battle-cries uring the electoral campaign, and, to do them credit, when they came into power they did for a couple of years make some effort to carry out the pledges they had given to the electorate. They cut down expenditure, and though, as events proved, the reduction made in one direction— namely, upon the Navy—was unwise, it is hardly fair to blame the Liberals for an attempt at economy which at the moment on many grounds seemed justified. They further made, while Mr. Asquith was Chancellor of the Exchequer, serious efforts at the reduction of the National Debt, notably by getting rid of the previous practice of raising loans for military and naval works. Simultaneously they were able to make some reductions in taxation. But this golden period of Liberal finance soon came to an end. The control of the Exchequer passed from Mr. Asquith to Mr. Lloyd George, and at the same time all the old traditions of Liberal finance were thrown to the winds, and the new Chancellor scattered the money of the taxpayer with both his hands. The excuse put forward by himself and his apologists is two-fold : first, that the increased expenditure was required to moot the necessities of national defence ; and secondly, that it was required for social reform. The first excuse breaks down the moment tho facts are examined. It is quite true that in the present year the expenditure of the country on defence is greater than during the first year or two of Liberal administration, but it is actually less now than it was in the last year of the previous Tory regime. If we take into account the expenditure out of loans as well as expenditure out of estimates, it will be found that in the year ending March 31st,1905, which was the last financial year for which the Unionists were completely responsible, our total military and naval expenditure was £73,000,000. In the current year the corresponding figure is £72,000,000. Thus the expendi- ture on national defence has not increased under the Liberals, but has slightly fallen. Tho whole of the enormous increase in the burdens which the present Ministry has placed upon the taxpayer is due to the growth in the various heads of civil expenditure, and particularly to the cost of what is politically known as social reform. It is worth while to see what the precise figures are. In the year 1904-5 our total national expenditure, including loan expenditure and local taxation grants from the Ex- chequer, was £159,838,000 ; in the current year, 1912-13, the corresponding figure is estimated at £189,870,000. Thus in sevenyears of Liberal administration the national expenditure has increased by £30,000,000 a year—not on account of the cost of national defence, but solely on account of social reform and general civil administration.

This gigantic sum of £30,000,000 a year, which is not far short of twice the interest on the National Debt, does not drop from heaven. It has to be raised in one form or another by compulsion from the inhabitants of the country, and is taken from resources which would other- wise be devoted by private individuals to satisfying their own wants or developing national industries. Even if the whole of this money were spent wisely by the State there would still be an immense amount of irritation created by the compulsory extraction of such a huge sum from private pockets. It must be remembered, too, that simultaneously there has been a very considerable growth in the expenditure of local authorities. That this ever-increasing extortion is resented by large sections of the population is a matter of common knowledge. Unfortunately, owing to the extra- ordinarily unjust system upon which our present franchise is based, the majority of the voters have no direct conscious- ness of the burden of taxation. They consequently- share the delusion which appears to inspire politicians like Mr. Lloyd George that only rich people pay taxes, and that the more they are bled the better for the nation. As a matter of fact, even if the rich alone paid taxes, it would be im- possible to tax them without also affecting large sections of the population injuriously. We do not, of course, for a moment mean to suggest that all taxation is on balance injurious to the nation as a whole. Everything depends on the purpose to which the money is devoted. There are certain national purposes which must be provided for, and taxes must be raised for those purposes, even if in so doing injury is inflicted, not only upon the immediate taxpayer, but also upon all that wide-reaching circle of individuals who are dependent upon his expenditure.

The real question is whether the nation has gained enough by the various forms of expenditure in which the Liberal Party has indulged to justify the irritation and the economic hardship created by the extortion of an extra £30,000,000 a year of taxes from the people of this country.

The best answer to this question is found in the increasing labour unrest which we see on every side. Mr. Lloyd George's schemes of social reform were deliberately under- taken with a view to meeting those evils which he thought tended to produce labour unrest ; but the unrest to- day is enormously greater than it was before the Liberal Party started upon its wild campaign of subsidizing the poor with the taxpayers' money. The money so lavishly poured out on old-age pensions and feeding school children might just as well have been dropped into the sea for all the good it has done in bringing content to the working classes. No doubt a certain amount of undeserved suffering has been assuaged, and the individuals thus relieved have doubtless been made happier ; but it is quite obvious that there has been no general reduction, but an increase, in the volume of dis- content. We believe that this is ultimately due to the fact that the private individual has been deprived of the control of his own money. Money that would have been his to spend as he chose upon his own immediate necessities or upon making provision for the future has been taken from him, or, at any rate, intercepted by the State and banded over to other people in whose welfare he necessarily feels less interest than in that of himself and his family, and many of whom by no means deserve the bounty showered upon them. This, indeed, is the worst aspect of such a gigantic system of doles as the present Governmene has organized. It is notorious that in all parts of the country old-ago pensions have been claimed, and art still being claimed, by persons who aro in no real need of public assistance, and who often fraudulently conceal their income in order to sponge upon the State. The d overnment itself in the Home Rule Bill has con- fessed as regards Ireland the gigantic blunder made in the Old-Ago Pensions Act, for it has been publicly acknowledged that the Irish Parliament is to be free to reduce the scale of pensions established by the Imperial Act. In addition to the mischief done by encouraging fraud in order to obtain public charity such pieces of legislation have the further evil that they multiply the number of officials, and thus withdraw labour from pro- ductive industry.

In spite of the wave of Socialism which has passed over the country, and which we regret to see has submerged a section of the Unionist Party, we still hold to the conviction that the old creed of both Conservatives and Liberals was right in insisting that the business of a Chancellor of the Exchequer is to keep down taxation to the lowest possible point, so that the money of the people may fructify in their own pockets. In the icing run all the questions of social reform with which Parliament is now interfering with its heavy and bungling hand resolve themselves into the single question of wages. And the wage-earner must suffer when the State, instead of permitting him and his employers to spend their money as they think best, launches out into ambitious schemes of social reform which, even if they are in themselves beneficial, involve an excessive scale of taxation and a consequent interruption to the free course of industry.