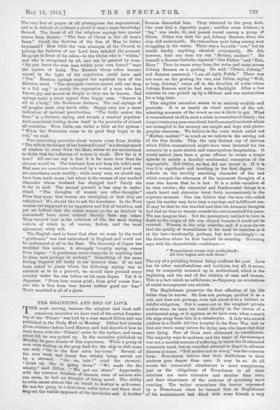 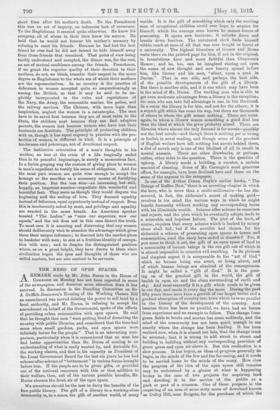 THE BEGINNING AND END OF LOVE. most moving, because the

simplest and least self- conscious, narrative we have read of the actual founder- ing of the ' Titanic' was told by a man named Dillon and was published in the Daily Mail on Monday. Dillon had already given evidence before Lord Mersey, and had described how he went down with the came to the surface, and swam about till he was picked up. In the narrative published on Monday he gave details of this experience. While a group of men were waiting on the poop deck for the ship to sink some one said, " Go to the first cabin bar-room." Several of the men went and found free whisky being served out by a steward. "Go on, lads 1" cried the steward ; " drink up. She is going down." " We made for the whisky," said Dillon. " We got our share." Apparently, with the common fatalism of seamen, even of seamen who can swim, he had no thought of being saved. The ability to swim seems almost like an insult to destiny in mid-ocean. He was for going to a first-class cabin below and there shut- ting out the visible approach of the inevitable end. A brother fireman dissuaded him. They returned to the poop deck. One man had a cigarette pnper ; another some tobacco ; a " fag " was made, lit, and passed round among a group of fifteen. Dillon was next his pal, Johnny Bannon, when the ship slid underneath. He remembers next being among men struggling in the water. There was a horrible " row," but he recalls hardly anything shouted articulately. He did, however, bear one man cry out " Mother, mother 1", He himself, a Roman Catholic, repeated " Our Father " and "Hail, Mary." Then he swam away from the noise and came across Johnny Bannon on a grating. He said, " Oheero, Johnny," and Bannon answered, " I am all right, Paddy." There was not room on the grating for two, and Dillon, saying " Well, so long, Johnny," swam off in the direction of a star where Johnny Bannon said he had seen a flashlight. After a few minutes he was picked up by a lifeboat and was unconscious for a long time.

This singular narrative seems to us entirely credible and probable. It is as nearly an exact account of the cul- minating moments of the wreck as one is likely to get. What is remembered at all in such a crisis is remembered clearly ; the larger events may pass unnoticed, but those small incidents which are entangled in the memory are caught and kept with photo- graphic clearness. We believe in the voice which called out " Mother, motherl" as much as we believe in the serving out of the free drinks. This, the only distinct cry of distress which Dillon remembered, might have been invented for the occasion by a more nimble and unscrupulous imagination. It would indeed have been a. gross offence to create a tragic episode to satisfy a familiar sentimental conception of the appropriate. But Dillon, we feel, did not invent it. If it is true it is significant and touching in the first degree. One reflects on the terribly searching character of the teat which compels the utterance of the innermost thoughts of a man who knows that he is lost. It is a noble variation of in vino veritas; the elemental and fundamental things in a man's heart and character burst forth unconsciously in the supreme moment. One can believe that the man who called upon his mother may have been a careless and indifferent son. It may be that he was married and that his domestic thoughts had had no time to wander outside his own household for years. We can imagine that. Yet the peremptory instinct to turn in death to the origin of life was obeyed because it could not be resisted. Woman is the only consoler, and if a man knows that the quality of womanliness is his need he snatches at it at the last—irrationally, perhaps, but how touchingly the direction where he first learned its meaning. Browning says with his characteristic confidence Womanliness means only motherhood : All love begins and ends there."

The cry of a perishing human being confirms the poet. Love has its other manifestations and incidents, but all, it seems, may be compactly summed up in motherhood, which is the beginning and the end of the relation of men and women. This is a fact which no selfishness, no flippancy, no revolutions of social arrangement can abolish.

The Englishman preserves the first affection of his life better than he knows. He does not, perhaps, profess it as a cult, and does not, perhaps, even talk about it as a natural or dutiful obligation. But it comes out in the roughest private soldier when he loses his timid identity in the chorus of a sentimental song, or it appears, as we have seen, when a man's life slips away from him in a catastrophe. A lady who nursed soldiers in a South African hospital in the Boer War told us that she wrote many letters for dying men who know that they were dying. Few of them were addressed to sweethearts. The majority were to mothers, and the tenor of the messages was not a morbid account of suffering, in which the ill-educated commonly excel, but an unselfish attempt to dispel in advance distress at home. "Toll mother not to worry," was the common form. Frenchmen believe that their dutifulness to their mothers goes deeper than ours. It may be so. At all events the ceremonial attachment is more conspicuous, just as the obligations of Frenchmen to all their relations are more extensive and stricter than ours, and their observance of the customs of mourning more exacting. The writer remembers the horror expressed by a Frenchman when be learned that an Englishman of his acquaintance had dined with some friends a very short time after his mother's death. To the Frenchman this was an act of impiety, an infamous lack of reverence. To the Englishman it seemed quite otherwise. He knew his company, all of whom in their turn knew his sorrow. He held that he would not honour his mother's memory by refusing to meet his friends. Because he had lost the best friend he ever had he did not intend to hide himself away from those friends that remained. That point of view being tacitly understood and accepted, the dinner was, for the rest, an act of mutual confidence among the friends. Frenchmen, if we grant the superior quality of their devotion to their mothers, do not, we think, transfer their respect in the same degree as Englishmen to the whole sex of which their mothers are the representatives. In no country is the practice of deference to women accepted quite so unquestioningly as among the British, so that it may be said to be im- plicitly incorporated in the rules and regulations of the Navy, the Army, the mercantile marine, the police, and the railway services. The Chinese, with more logic than inspiration, neglect the women in a catastrophe. The men have to be saved first because they are of most value to the State, the children next because they can find adoptive parents, the women last because women who have lost their husbands are destitute. The principle of protecting children with us, though it has equal cogency in practice with the pro- tection of women, is different in kind. It is a principle of tenderness and patronage, not of devotional respect.

The instinctive orientation of a man's thoughts to his mother, no less at the crisis of a life tragically ended than in its peaceful beginnings, is surely a momentous fact. In a feeble groping way the custom of giving place to women is man's expedient to testify his sense of obligation. And for the most part women are quite wise enough to accept the homage or the sacrifice as a necessary means of fortifying their position. But the less wise—an increasing but still, happily, an impotent number—repudiate this wonderful and beautiful fact. They seem as though they would dispute the beginning and the ending of love. They demand equality instead of deference, equal opportunity instead of respect. Even this is incoherently asked by moat, and privilege and equality are exacted in the same breath. An American speaker toasted "The Ladies" as "once our superiors, now our equals," and the wit does not in this case distort the truth. To moat men it is amazing and distressing that any women should deliberately wish to abandon the advantage which gives them their unique influence ; to descend into the market-place to huckster with men; to aim at a fruitless identity of occupa- tion with men ; and to despise the distinguished position where, as on a great height, they have drawn to them since civilization began the eyes and thoughts of those who are called masters, but are also content to be servants.