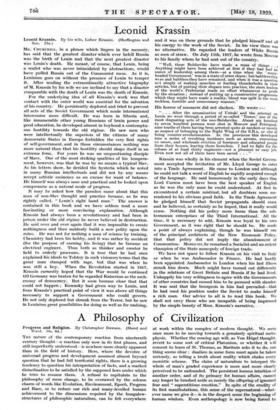 Mn. CRUReRILL, in a phrase which lingers in the memory, has said that the greatest disaster which ever befell Russia was the birth of Lenin and that the next greatest disaster Vris Lenin's death. He meant, of course, that Lenin, being a" realist who was never intimidated by abstractions, wbuld have pulled Russia out of the Communist mess. As it is, Leninism goes on without the presence of Lenin to temper it. After reading the extraordinarily attractive biography of M. Krassin by his wife we are inclined to say that a disaster comparable -with the death of Lenin was the death of Krassin.

For the underlying idea of all Krassin's work was that contact with the outer world was essential for the salvation of his country. He persistently deplored and tried to prevent all acts of the Soviet Government which made international intercourse more difficult. He was born in Siberia and, like innumerable other young Russians of brain power and good education, he developed almost in boyhood a contemptu- ous hostility towards the old regime. He saw men who were intellectually the superiors of the citizens of many democratic States in Europe forbidden the very first rights of self-government, and in those circumstances nothing was more natural than that his hostility should shape itself in an extreme form. For years he was an unquestioning disciple of Marx. One of the most striking qualities of his tempera- ment, however, was that he was by no means a typical Slay. As his letters show, he derided the hysteria which he noted in many Russian intellectuals and did not by any means accept artistic eminence as an excuse for want of balance. He himself was always sane and practical and he looked upon compromise as a natural mode of progress.

It may be asked how the paradox came about that this man of non-Slav thought and practice became, as he was rightly called, "Lenin's right hand man." The answer is contained in this book and we have seldom read a more fascinating or more convincing explanation. Although Krassin had always been a revolutionary and had been in prison under the old regime he never believed in destruction. He said over and over again that it was impossible to create nothingness and then suddenly build a new polity upon the ruins. He was not for nothing a man of science by training. Chemistry had been his hobby, and it was rather by accident (for the purpose of earning his living) that he became an electrical engineer. Thus both as thinker and creator he held to orderly processes. It is true that he had once explained his ideals to Tolstoy in such visionary terms that the great man stamped with rage, but that was when he was still a boy. When the Revolution started in 1917, Krassin earnestly hoped that the War would be continued till Germany was beaten for he regarded Kaiserism as the arch- enemy of democracy. But it soon became clear that that could not happen ; Kerensky had given way to Lenin, and from Krassin's practical point of view it was above all things necessary to support a Government who could govern. He not only deplored but shrank from the Terror, but he saw in Leninism great possibilities for doing as well as for undoing,

and it was on these grounds that he pledged himself and all his energy to the work of the Soviet. In his view there was no alternative. He regarded the leaders of White Russia as men of straw. On July 11th, 1917, he wrote from Moscow to his family whom he had sent out of the country: "Well, these Bolsheviks have made a mess of things . . ; Anything might have been achieved at first if they had had an ounce of leadership among them—at a time when the 'many. headed Government' was in a state of utter dittos; but babblers they were and babblers they have remained, and when it was a question act simply of making speeches or hurling thunderbolts in their articles, but of putting their slogans into practice, the stern leaden of the world's Proletariat made no effort whatsoever to profit by the situation ; instead of putting up a constructive programme which they might have made a reality, blood was spilt in the most reckless, horrible and unnecessary manner."

His horror of massacre did not slacken. He wrote

. . . After the assassination of Uritski and the attempt on Lenin we went through a period of so-called Terror,' one of the most disgusting acts of the neo-Bolsheviks. About six hundred to seven hundred persons were shot in Moscow and Petrograd, nine-tenths of them having been arrested quite at random or merely as suspect of belonging to the Right Wing of the S.R.s, or else of being counter-revolutionaries. In the provinces this developed into a series of revolting incidents such as arrests, executions en Innen, and wholesale eviction of bourgeois and educated people from their houses, leaving them homeless. I had to fight for the release of at least thirty engineers—not a pleasant or easy job. Even now not all of them have been saved . .

Krassin was wholly in his element when the Soviet Govern. meat accepted the invitation of Mr. Lloyd George to enter into a Trade Agreement. He came to London and although he could not talk a word of English he rapidly acquired enough of the language. He said humorously in the early days that Lord Curzon must have been the best speaker of English as he was the only man he could understand. At first he encountered a certain mistrust, but all doubters soon sur- rendered to his obvious good faith. In the Trade Agreement he pledged himself that Soviet propaganda should cease and he believed, as certainly as he hoped, that it really would cease. Nothing did his policy more harm than the sub- terranean enterprises of the 'Third International. All the time, it is necessary to add, Krassin was loyal to his own Government, as it was right that he should be. He made a point of always explaining, though he was himself one

of the principal architects of the New Economic Policy, that that policy did not imply the abandonment of Communism. Moreover, he remained a Socialist and an ardent champion of the State monopoly of foreign trade.

We have not space to follow Krassin on his visit to Italy or when he was Ambassador in France. He had hardly

been appointed Ambassador in London when his last illness struc.k him down. Much might have turned out differently in the relations of Great Britain and Russia if he had lived. Unhappily his very willingness to agree with the Governments of other countries had caused him to be pursued with slander. It was said that the bourgeois in him had prevailed—that he had used his position under the Soviet to make himself a rich man. Our advice to all is to read this book. We shall not envy those who are incapable of being impressed by the simple beauty of Mme. Krassin's narrative.