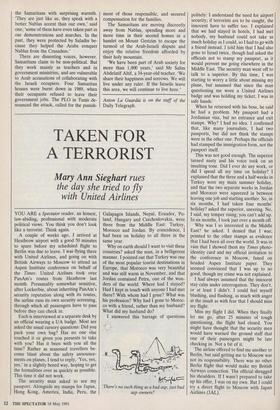 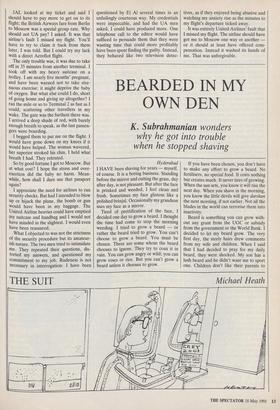 TAKEN FOR A TERRORIST

the day she tried to fly with United Airlines

YOU ARE a Spectator reader, an honest, law-abiding, professional with moderate political views. You think you don't look like a terrorist. Think again.

A couple of weeks ago, I arrived at Heathrow airport with a good 50 minutes to spare before my scheduled flight to Berlin was due to leave. I was flying there with United Airlines, and going on with British Airways to Moscow to attend an Aspen Institute conference on behalf of the Times. United Airlines took over PanAm's routes from Heathrow last month. Presumably somewhat sensitive, after Lockerbie, about inheriting PanAm's security reputation along with its routes, the airline runs its own security screening, through which all passengers have to pass before they can check in.

Each is interviewed at a separate desk by an official wearing a UA badge. Most are asked the usual cursory questions: Did you pack your own bag? Has no one else touched it or given you presents to take with you? Has it been with you all the time? Rather as seasoned travellers be- come blasé about the safety announce- ments on planes, I tend to reply, 'Yes, yes, yes,' in a slightly bored way, hoping to get the formalities over as quickly as possible. This time it did not work.

The security man asked to see my passport. Alongside my stamps for Japan, Hong Kong, America, India, Peru, the Galapagos Islands, Nepal, Ecuador, Po- land, Hungary and Czechoslovakia, were three from the Middle East: Turkey, Morocco and Jordan. By coincidence, I had been on holiday to all three in the same year.

Why on earth should I want to visit these countries? asked the man, in a belligerent manner. I pointed out that Turkey was one of the most popular tourist destinations in Europe, that Morocco was very beautiful and was still warm in November, and that Jordan contained Petra, one of the won- ders of the world. Where had I stayed? Had I kept in touch with anyone I had met there? With whom had I gone? What was his profession? Why had I gone to Moroc- co with a friend, rather than my husband? What did my husband do?

I answered this barrage of questions 'There's no such thing as a bad asp, just bad asp owners!' politely: I understand the need for airport security; if terrorists are to be caught, the innocent have to suffer too. I explained that we had stayed in hotels, I had met nobody, my husband could not take as much holiday as I could, so I had to go with a friend instead. I told him that I had also gone to Israel twice, though had asked the officials not to stamp my passport, as it would prevent me going elsewhere in the Middle East. The security man went off to talk to a superior. By this time, I was starting to worry a little about missing my plane, but assumed that since the man questioning me wore a United Airlines badge and was holding my ticket, I was in safe hands.

When he returned with his boss, he said he had a problem. My passport had a Jordanian visa, but no entrance and exit stamps. Why? I had no idea. I confirmed that, like many journalists, I had two passports, but did not think the stamps were in the other one. Perhaps the officials had stamped the immigration form, not the passport itself.

This was not good enough. The superior turned nasty and his voice took on an insulting tone. Did I ever do any work, or did I spend all my time on holiday? I explained that the three and a half weeks in Turkey were my main summer holiday, and that the two separate weeks in Jordan and Morocco were squeezed in between leaving one job and starting another. So, in six months, I had taken four months' holiday? asked the superior, sneering. No, I said, my temper rising; you can't add up. In six months, I took just over a month off.

Why was I so interested in the Middle East? he asked. I denied that I was; pointed to the other stamps as evidence that I had been all over the world. It was in vain that I showed them my Times photo- identity card and my official invitation to the conference in Moscow, faxed on headed Aspen Institute paper. They seemed convinced that I was up to no good, though my crime was not explained.

I had always assumed that the innocent stay calm under interrogation. They don't, or at least I didn't. I could feel myself blushing, and flushing, as much with anger at the insult as with fear that I should miss my flight.

Miss my flight I did. When they finally let me go, after 25 minutes of tough questioning, the flight had closed. You might have thought that the security men would have warned the ground staff that one of their passengers might be late checking in. Not a bit of it.

The airline offered to find me another to Berlin, but said getting me to Moscow was not its responsibility. There was no other Berlin flight that would make my British Airways connection. The official shrugged his shoulders. If I wasn't prepared to take up his offer, I was on my own. But I could try a direct flight to Moscow with Japan Airlines (JAL).

JAL looked at my ticket and said I should have to pay more to get on to its flight; the British Airways fare from Berlin to Moscow was a special group rate. Why should not UA pay? I asked. It was that airline's fault I missed my flight. You'll have to try to claim it back from them later, I was told. But I could try my luck with a direct Aeroflot flight.

The only trouble was, it was due to take off in 35 minutes from another terminal. I took off with my heavy suitcase on a trolley. I am nearly five months' pregnant, and have been warned not to take stre- nuous exercise: it might deprive the baby of oxygen. But what else could I do, short of going home and giving up altogether? I ran the mile or so to Terminal 2 as fast as I could, scattering other travellers in my wake. The gate was the furthest there was. I arrived a deep shade of red, with barely enough breath to speak, as the last passen- gers were boarding.

I begged them to put me on the flight. I would have gone down on my knees if it would have helped. The woman wavered, her superior stroked his chin, I held what breath I had. They relented.

So by good fortune I got to Moscow. But at what cost? I hope the stress and over- exertion did the baby no harm. Mean- while, how shall I dare use that passport again?

I appreciate the need for airlines to run security checks. But had I intended to blow up or hijack the plane, the bomb or gun would have been in my baggage. The United Airline heavies could have emptied my suitcase and handbag and I would not have minded in the slightest. I would even have been reassured.

What I objected to was not the strictness of the security procedure but its amateur- ish nature. The two men tried to intimidate me. They repeated their questions, dis- torted my answers, and questioned my commitment to my job. Rudeness is not necessary in interrogation: I have been questioned by El Al several times in an unfailingly courteous way. My credentials were impeccable, and had the UA men asked, I could have produced more. One telephone call to the editor would have sufficed to persuade them that they were wasting time that could more profitably have been spent finding the guilty. Instead, they behaved like two television detec- tives, as if they enjoyed being abusive and watching my anxiety rise as the minutes to my flight's departure ticked away.

It was entirely United Airlines' fault that I missed my flight. The airline should have got me to Moscow one way or another or it should at least have offered com- pensation. Instead it washed its hands of me. That was unforgivable.