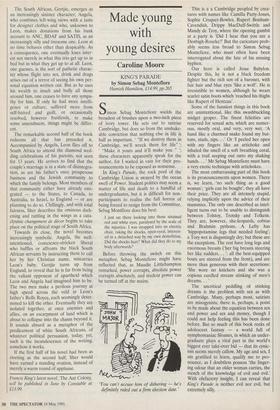 Made young with young desires

KING'S PARADE by Simon Sebag Montefiore Hamish Hamilton, £14.99, pp.265 'S imon Sebag Montefiore wields the broadest of brushes upon a two-inch piece of ivory tower. He sets out to satirise Cambridge, but does so from the unshake- able conviction that nothing else in life is half as important. ' "If we destroy them in Cambridge, we'll wreck them for life" '; ' "Make it yours and it'll make you " ': these characters apparently speak for the author, for I waited in vain for their pro- nouncements to be exposed as nonsense.

In King's Parade, the rock pool of the Cambridge Union is swayed by the ocean swell of Power. Student politics may seem a matter of life and death to a handful of undergraduates, but it is difficult for non- participants to realise the full horror of being forced to resign from the Committee.. Sebag Montfiore does his best:

I just sat there looking into those strained red and white eyes, paralysed by the scale of the injustice. I was strapped into an electric chair, taking the shocks, open-eyed, interest- ed in a detached way by my own demolition. Did the shocks hurt? What did they do to my body afterwards?

Before throwing the switch on this metaphor, Sebag Montefiore might have reflected that, as Maudie Littlehampton remarked, power corrupts, absolute power corrupts absolutely, and student power can be turned off at the mains.

`You can't accuse him of dithering — he's definitely ruled out a firm election date.' This is a a Cambridge peopled by crea- tures with names like Camilla Party-Jones, Sophie Croquet-Bowles, Rupert Bonham- Cavendish, Drippy MacDuff-Swittle and Mandy de Troy, where the opening gambit at a party is 'Did I hear that you are a Denbigh-Rourke?' But the caricature prob- ably seems less broad to Simon Sebag Montefiore, who must often have been interrogated about the fate of his missing hyphen.

Our hero is called Jesse Babylon. Despite this, he is not a black freedom fighter but the rich son of a baronet, with fair hair and blue eyes 'like a wolf'. He is irresistible to women, although he wears scarlet satin boots which 'reached his thighs like Rupert of Hentzau'.

Some of the funniest things in this book are unintentional, like this swashbuckling midget groper. The finest felicities are reserved for sexual acts, which are numer- ous, mostly oral, and very, very wet. 'A hand like a charmed snake found my but- tons, studs, zips. . Or 'I peeled her open with my fingers like an artichoke and inhaled the smell of a soft breathing coral, with a trail seeping out onto my shaking hands... ' Mr Sebag Montefiore must have a very exotic technique with artichokes.

The most embarrassing part of this book is its pronouncements upon women. There is, we learn, 'no such thing as a good woman'; 'girls can be bought', they all have their price. They are all intensely stupid, relying implicitly upon the advice of their mummies. The only one described as intel- ligent turns out to be unable to distinguish between Tolstoy, Trotsky and Tolkein. They are, however, she-leopards, cobras and Brahmin pythons. A Lefty has `hippopotamine legs that needed feeling'; a Tory wet is disgustingly dry; but these are the exceptions. The rest have long legs and enormous breasts Cher big breasts steering her like rudders... ': all the best-equipped boats are steered from the front), and are more than generous with their secretions: `She wore no knickers and she was a copious curdled stream stinking of men's dreams. .. '

The uncritical peddling of stinking dreams is the problem with sex as with Cambridge. Many, perhaps most, satirists are misogynists; there is, perhaps, a point to be made about the equation between sex and power and sex and money, though I could not help feeling this has been done before. But so much of this book reeks of adolescent fantasy — a world full of nymphomaniac Sloanes, in which an under- graduate plays a vital part in the world's biggest ever take-over bid — that its cynic- ism seems merely callow. My age and sex, I am gratified to learn, qualify me to pro- nounce, as I doubtless possess 'the linger- ing odour that an older woman carries, the stench of the knowledge of evil and evil.' With olefactory insight, I can reveal that King's Parade is neither evil nor evil, but extremely silly.