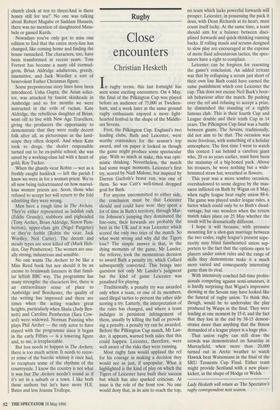 In rugby terms, this last fortnight has seen some exciting encounters. On 4 May, the final of the Pilkington Cup was played before an audience of 75,000 at Twicken- ham, and a week later at the same ground rugby enthusiasts enjoyed a more light- hearted festival in the shape of the Middle- sex Sevens.

First, the Pilkington Cup. England's two leading clubs, Bath and Leicester, were worthy contenders for the season's top award, and on paper it looked as though the game might produce some spectacular play. With so much at stake, this was opti- mistic thinking. Nevertheless, the match had some magic moments. Leicester's first try, scored by Niall Malone, but inspired by Darren Garfoth's brave run, was one of them. So was Catt's well-timed dropped goal for Bath.

For anyone uncommitted to either side, the conclusion must be that Leicester should and could have won: they spent a lot of time in Bath's territory, through Mar- tin Johnson's jumping they dominated the line-outs, their forwards are probably the best in the UK and it was Leicester which scored the only two tries of the match. So what went wrong and why did the Tigers lose? The simple answer is that, in the dying moments of the game, Mr Lander, the referee, took the momentous decision to award Bath a penalty try, which Collard subsequently converted. This brings into question not only Mr Lander's judgment but the kind of game Leicester was penalised for playing.

Traditionally, a penalty try was awarded only when a team, or one of its members, used illegal tactics to prevent the other side scoring a try. Latterly, the interpretation of the rules has changed, and where a team indulges in persistent infringement of them, usually by killing the ball or provok- ing a penalty, a penalty try can be awarded. Before the Pilkington Cup match, Mr Lan- der, it appears, warned both sides that this could happen. Leicester, therefore, were well aware of the risks they were running.

Most rugby fans would applaud the ref for his courage in making a decision they would see as just, if unpopular. What it highlighted is the kind of play on which the Tigers of Leicester have built their success but which has also sparked criticism. At issue is the role of the front row. No one would deny that, in its aim to reach the top, no team which lacks powerful forwards will prosper. Leicester, in possessing the pack it does, with Dean Richards at its heart, must count itself lucky. At the same time, a team should aim for a balance between disci- plined forwards and quick-thinking running backs. If rolling mauls and scrums designed to slow play are encouraged at the expense of more fluid adventurous tactics, the spec- tators have a right to complain.

Leicester can be forgiven for resenting the game's conclusion. An added irritant was that by collapsing a scrum just short of their own line Bath could have earned the same punishment which cost Leicester the cup. This does not excuse Neil Back's boor- ish behaviour after the match. By pushing over the ref and refusing to accept a prize, he diminished the standing of a rightly famous club. This is their fourth Cup and League double and their tenth Cup in 14 years. The Pilkington Cup final was a battle between giants. The Sevens, traditionally, did not aim to be that. The occasion was more frivolous, with something of a holiday atmosphere. The first time I went to watch this contest I sat behind a carefree giant who, 20 or so years earlier, must have been the mainstay of a big-boned pack. Above his trousers, he wore nothing but a wide- brimmed straw hat, wreathed in flowers.

This year was a more sombre occasion, overshadowed to some degree by the mas- sacre inflicted on Bath by Wigan on 8 May, when rugby league beat rugby union 88-6. The game was played under league rules, a factor which could only be to Bath's disad- vantage, but one wonders when the return match takes place on 25 May whether the result will be dramatically different.

I hope it will because, with pressure mounting for a shot-gun marriage between the two codes, rugby league's present supe- riority may blind fainthearted union sup- porters to the fact that the options open to players under union rules and the range of skills they demonstrate make it a much more varied and consequently interesting game than its rival.

With intensively coached full-time profes- sionals competing against semi-amateurs, it is hardly surprising that Wigan's impressive showing at the Sevens may have looked like the funeral of rugby union. To think this, though, would be to undervalue the play produced by Wasps in the final. They were leading at one moment by 15-0, and the fact that they lost in the end by 38-15 demon- strates more than anything that the fitness demanded of a league player is a huge plus.

That union rugby can still draw the crowds was demonstrated on Saturday at Murrayfield, when more than 20,000 turned out in Arctic weather to watch Hawick beat Watsonians in the final of the SRU Tennents Cup Final. Either team might provide Scotland with a new place- kicker, in the shape of Hodge or Welsh.

Lady Hesketh will return as The Spectator's rugby correspondent next season.