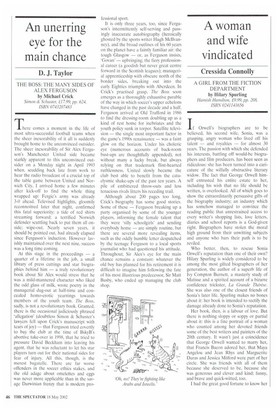 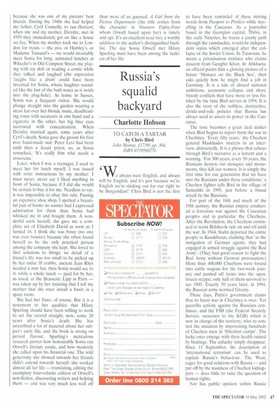 A woman and wife vindicated

A GIRL FROM THE FICTION DEPARTMENT by Hilary Spurling Hamish Hamilton, £9.99, pp. 208, ISBN 0241141656 If Orwell's biographers are to be believed, his second wife. Sonia, was a grasping, angry woman who lived off his talent — and royalties — for almost 30 years. The passion with which she defended his interests, battling off would-be biographers and film producers, has been seen as ridiculous: she has been turned into a caricature of the wilfully obstructive literary widow. The fact that George Orwell himself entrusted his entire estate to her, including his wish that no life should be written, is overlooked. All of which goes to show the extraordinarily persuasive gifts of the biography industry; an industry which has somehow managed to convince the reading public that unrestrained access to every writer's shopping lists, love letters, diaries and school reports is a God-given right. Biographers have stolen the moral high ground from their unwitting subjects and anyone who bars their path is to be reviled.

Who better, then, to rescue Sonia Otwell's reputation than one of their own? Hilary Spurting is widely considered to be among the most gifted biographers of her generation, the author of a superb life of Ivy Compton Burnett, a masterly study of Matisse and a spirited account of a bizarre confidence trickster, La Grande Therese. She was also one of the closest friends of Sonia's later life. Spurting makes no bones about it: her book is intended to rectify the damage already done to Sonia's reputation.

Her book, then, is a labour of love. But there is nothing sloppy or soppy or partial about it: this is a fine portrait of a woman who counted among her devoted friends some of the best writers and painters of the 20th century. It wasn't just a coincidence that George Orwell wanted to marry her, that Francis Bacon adored her, that Maya Angelou and Jean Rhys and Marguerite Duras and Jessica Mitford were part of her circle. She was friends with all of them because she deserved to be, because she was generous and clever and kind; funny, and brave and quick-witted, too.

I had the great good fortune to know her because she was one of my parents' best friends. During the 1940s she had helped my father, Cyril Connolly, to run Horizon; when she and my mother. Deirdre, met in 1959 they immediately got on like a house on fire. When my mother took me to London for treats — the zoo, or Hamley's, or Madame Tussaud's — we would invariably meet Sonia for long, animated lunches at Wheeler's in Old Compton Street, me playing with my doll or reading a comic while they talked and laughed (the expression 'laughs like a drain' could have been invented for Sonia, whose laughter sounded like the last of the bath water as it swirls into the plug-hole). At home in Sussex, Sonia was a frequent visitor. She would plunge straight into the garden wearing a straw hat over her blonde mane, deadheading roses with secateurs in one hand and a cigarette in the other, her big blue eyes narrowed with concentration. When Deirdre married again, some years after Cyril's death, Sonia gave the groom his first ever hand-made suit: Peter Levi had been until then a Jesuit priest, so, as Sonia remarked, 'It's really him who needs a trousseau.'

Later, when I was a teenager, I used to meet her for lunch myself. I was issued with strict instructions by my mother: I must never, never say I liked anything in front of Sonia, because if I did she would be certain to buy it for me. Needless to say, it was impossible to obey this rule. Passing an expensive shoe shop, I spotted a beautiful pair of boots: no sooner had I expressed admiration for them than Sonia had whisked me in and bought them. A wonderful cook herself, she gave me a complete set of Elizabeth David as soon as I turned 16. I think she was bossy (no one was ever bossier) because she often found herself to be the only practical person among the company she kept. She loved to find solutions to things: no detail of a friend's life was too small to be picked up by her radar. If crabby, ancient Jean Rhys needed a new hat. then Sonia would see to it; while a whole lunch — paid for by her, as usual, at the Brasserie Lipp in Paris — was taken up by her insisting that 1 tell my mother that she must install a basin in a Spare MOM.

She had her flaws, of course. But it is a testament to her qualities that Hilary Spurling should have been willing to work to set the record straight, now, some 20 years after Sofia's death. She has unearthed a lot of material about her subject's early life, and the book is strong on period flavour. Spurling's meticulous research proves how honourably Sonia ran Orwell's literary estate, and how modestly she called upon his financial one. The wild generosity she showed towards her friends didn't extend towards herself: she worked almost all her life — translating, editing the exemplary four-volume edition of Orwell's non-fiction, discovering writers and helping them — and was very much less well off than most of us guessed. A Girl from the Fiction Department (the title comes from the character in Nineteen Eighty-Four whom Orwell based upon her) is timely and apt. U's an excellent read too; a worthy addition to the author's distinguished backlist. The day Sonia Orwell met Hilary Spurling must have been among the luckiest of her life.