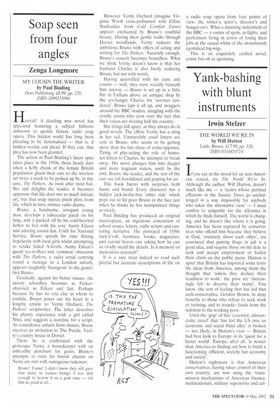 MY COUSIN THE WRITER by Paul Binding Dewi Publishing £8.99, pp. 220, ISBN 1899235094 Hoorah! A dazzling new novel has appeared featuring a subject hitherto unknown to quality fiction, radio soap opera. This hidden world has long been pleading to be fictionalised — that is, if hidden worlds can plead. If they can, that plea has now been granted.

The action in Paul Binding's latest opus takes place in the 1950s. those heady days when a hefty chunk of the female British population glued their ears to the wireless set twice a week to be perked up by, in this case, The Parkers. As twist after twist baffles and delights the reader, it becomes apparent that life does not so much imitate art, but that soap operas pinch plots from life, which in turn, mimics radio drama.

Bruno, a handsome, arrogant young man, develops a tubercular patch on his lung, and is packed off by his cold-hearted father to live with his cosy Aunty Eileen and adoring cousin Ian. Unfit for National Service, Bruno spends his time flirting hopelessly with local girls whilst attempting to retake failed A-levels. Aunty Eileen's gaudy tea-trolleys and 'common' obsession with The Parkers, a radio serial centring round a vicarage in a London suburb, appears laughably 'bourgeois' to the gentrified Bruno.

Gradually, against his better nature, the snooty schoolboy becomes as Parkerobsessed as Eileen and Ian. Perhaps because he has no one else in whom to confide, Bruno pours out his heart in a lengthy epistle to Verity Orchard, The Parkers' scriptwriter. The letter describes his ghastly experience with a girl called Nina, and suggests a storylinc for a script. As coincidence unfurls from chance, Bruno receives an invitation to The Puzzle, Verity's country house in Dorset.

There he is confronted with the grotesque Nesta, a housekeeper with an unhealthy penchant for goats. Bruno's attempts to ooze his boyish charms on Nesta are met with outrageous rudeness:

Bruno? Funny! I didn't know they still gave that name to human beings. I was daft enough to bestow it on a goat once — did him no good at all...

However Verity Orchard (imagine Virginia Woolf cross-pollinated with Elfine Starkadder from Cold Comfort Farm) appears enchanted by Bruno's youthful beauty. During their gentle walks through Dorset woodlands, Verity seduces the ambitious Bruno with offers of acting and writing for The Parkers. Naturally enough, Bruno's conceit becomes boundless. What we think Verity doesn't know is that her husband Charles is also busily seducing Bruno, but not with words.

Having quarrelled with his aunt and cousin — well, they were socially beneath him anyway — Bruno is set up in a little flat in Fulham above an antique shop by the sex-hungry Charles for 'services rendered'. Bruno laps it all up, and swaggers around the BBC studios, mingling with the cranky actors who crow over the fact that their voices are riveting half the country.

But things fall apart, as they always do in good novels. The effete Verity has a sting in her tail. Unutterably cruel letters are sent to Bruno. who seems to be getting more than his fair share of come-uppance. Tiring of play-acting the role of homosex kitten to Charles, he attempts to break away. His move plunges him into deeper and more stagnant waters, until, by the end. Bruno, the reader, and the rest of the cast are left bewildered and gasping for air.

This book bursts with surprises both funny and brutal. Every character has a hidden jack-in-the-box 'other side' which pops out to hit poor Bruno in the face just when he thinks he has manipulated things so nicely.

Paul Binding has produced an original masterpiece. an ingenious concoction of school essays, letters, radio scripts and cantering narrative. His portrayal of 1950s rock'n'roll, furniture, books, magazines, and cuisine leaves one asking how he can so vividly recall the details. Is it memory or meticulous research?

It is a rare treat indeed to read such playful but accurate descriptions of life on a radio soap opera from four points of view, the writer's, actor's, director's and hanger-on's. What a damning indictment of the BBC — a vortex of spats, in-fights, and performers living in terror of losing their jobs at the casual whim of the monstrously egotistical big-wigs.

This is an exquisitely crafted novel, comic but oh so agonising.