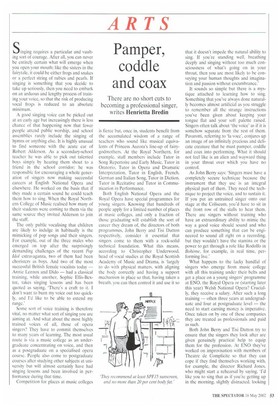 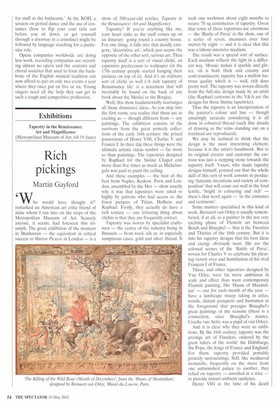 There are no short cuts to becoming a professional singer, writes Henrietta Bredin Singing requires a particular and vaulting sort of courage. After all, you can never be entirely certain what will emerge when you open your mouth; like the sisters in the fairytale, it could be either frogs and snakes or a perfect string of rubies and pearls. If singing is something that you decide to take up seriously, then you need to embark on an arduous and lengthy process of training your voice, so that the risk of producing vocal frogs is reduced to an absolute minimum,

A good singing voice can be picked out at an early age but increasingly there is less chance of that happening now that fewer people attend public worship, and school assemblies rarely include the singing of hymns or anything else. It is highly unusual to find someone with the acute ear of Robert Alderson. As a secondary-school teacher he was able to pick out talented boys simply by hearing them shout to a friend in the school corridor: he was responsible for encouraging a whole generation of singers now making successful careers at English National Opera and elsewhere. He worked on the basis that if they made a certain sound he could teach them how to sing. When the Royal Northern College of Music realised how many of their students were coming to them via the same source they invited Alderson to join the staff, The only public vocalising that children are likely to indulge in habitually is the mimicking of pop songs and their singers. For example, out of the three males who emerged on top after the surprisingly demanding challenges of the recent Pop Idol extravaganza, two of them had been choristers as boys. And two of the most successful British female vocalists today — Annie Lennox and Dido — had a classical training, while another, Sophie Ellis-Bextor, takes singing lessons and has been quoted as saying, 'There's a craft to it. I don't want to burn my voice out too quickly, and I'd like to be able to extend my range.'

Some sort of voice training is therefore vital, no matter what sort of singing you are aiming at. And what about the most highly trained voices of all, those of opera singers? They have to commit themselves to many years of learning. The most usual route is via a music college as an undergraduate concentrating on voice, and then as a postgraduate on a specialised opera course. People also come to postgraduate courses after studying other subjects at university but will almost certainly have had singing lessons and been involved in performance during that time.

Competition for places at music colleges is fierce but, once in, students benefit from the accumulated wisdom of a range of teachers who sound like musical equivalents of Princess Aurora's line-up of fairygodmothers. At the Royal Northern, for example. staff members include Tutor in Song Repertoire and Early Music, Tutor in Oratorio, Tutor in Opera and Dramatic Interpretation, Tutor in English, French, German and Italian Song, Tutor in Diction, Tutor in Recitative and Tutor in Communication in Performance.

Both English National Opera and the Royal Opera have special programmes for young singers. Knowing that hundreds of people apply for a limited number of places at music colleges, and only a fraction of those graduating will establish the sort of career they dream of, the directors of both programmes, John Berry and Tisi Dutton respectively, consider it essential that singers come to them with a rock-solid technical foundation. What this means, according to Christopher Underwood, head of vocal studies at the Royal Scottish Academy of Music and Drama, is 'largely to do with physical matters, with aligning the body correctly and having a support mechanism in place so that, having taken a breath, you can then control it and use it so

that it doesn't impede the natural ability to sing. If you're standing well, breathing deeply and singing without too much consciousness of what's going on in your throat, then you are most likely to be conveying your human thoughts and imagination and passion without encumbrance.'

It sounds so simple but there is a mystique attached to learning how to sing. Something that you've always done naturally becomes almost artificial as you struggle to remember all the strange instructions you've been given about keeping your tongue flat and your soft palette raised. Singers often talk about 'the voice' as if it is somehow separate from the rest of them. Pavarotti, referring to 'la voce', conjures up an image of an infinitely precious and delicate creature that he must pamper, coddle and coax into performing. What it should not feel like is an alien and wayward thing in your throat over which you have no control.

As John Berry says: 'Singers must have a completely secure technique because the instrument that they use is an integral physical part of them. They need the technique to project the voice, and to sustain it. If you put an untrained singer onto our stage at the Coliseum, you'd have to sit in the front row of the stalls to hear them. There are singers without training who have an extraordinary ability to mimic the way a good voice should sound and who can produce something that can be engineered to sound all right on a recording, but they wouldn't have the stamina or the power to get through a role like Rodolfo in Boheme. for example, in real time, performing live.'

What happens to the lucky handful of singers who emerge from music college with all this training under their belts and get a place on a young singers' programme at ENO, the Royal Opera or (starting later this year) Welsh National Opera? Crucially, they receive a salary. After such a long training — often three years at undergraduate and four at postgraduate level — the need to start earning money is imperative. Once taken on by one of these companies they are treated as professionals and paid as such.

Both John Berry and Tisi Dutton try to ensure that the singers they look after are given genuinely practical help to equip them for the profession. At ENO they've worked on improvisation with members of Theatre de Complicite so that they can cope if they find themselves working with, for example, the director Richard Jones, who might start a rehearsal by saying, 'I'd like you to sing that as if you're getting up in the morning, slightly distracted, looking

for stuff in the bathroom.' At the ROH, a session on period dance and the use of costumes (how to flip your coat tails out before you sit down, or get yourself through a doorway in a crinoline) might be followed by language coaching for a particular role.

Opera companies worldwide are doing less work, recording companies are recording almost no opera and the oratorio and choral societies that used to form the backbone of the English musical tradition can now afford to put on only two events a year where they once put on five or six. Young singers need all the help they can get in such a tough and competitive profession.