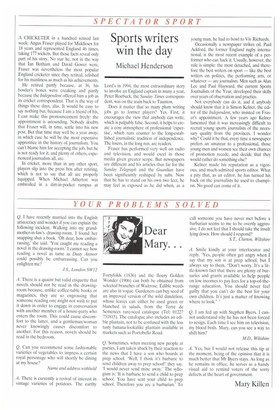 A CRICKETER in a hundred retired last week: Angus Fraser played for Middlesex for 18 years and represented England 46 times, taking 177 wickets. But those facts reveal only part of his story. No star he, not in the way that Ian Botham and David Gower were, Fraser was nevertheless the most popular England cricketer since they retired, relished for his manliness as much as his achievements.

He retired partly because, at 36, his bowler's bones were creaking and partly because the Independent offered him a job as its cricket correspondent. That is the way of things these days, alas. It would be easy to say nothing but, because I am a friend of his, I can make this pronouncement freely: the appointment is astounding. Nobody doubts that Fraser will, in time, settle into his new post. But that time may well be a year away; in which case he will be the most expensive apprentice in the history of journalism. You can't blame him for accepting the job, but he is not ready for it, and plenty of others, experienced journalists all, are.

In cricket, more than in any other sport, players slip into the press box after retiring, which is not to say that all are properly equipped. When Michael Atherton was embroiled in a dirt-in-pocket rumpus at

Lord's in 1994, the most extraordinary story to involve an England captain in many a year, Peter Roebuck, the Sunday Times correspondent, was on the train back to Taunton.

Does it matter that so many plum writing jobs go to former players? Yes. First, it encourages the view that anybody can write, which is palpably false. Second, it helps to create a cosy atmosphere of professional 'expertise', which runs counter to the long-established journalistic tradition of independence. The losers, in the long run, are readers.

Fraser has performed very well on radio and television, and would excel in those media given greater scope. But newspapers are different and his articles thus far for the Sunday Telegraph and the Guardian have been significantly reshaped by subs. Now that he has to stand on his own two feet, he may feel as exposed as he did when, as a

young man, he had to bowl to Viv Richards.

Occasionally a newspaper strikes oil. Paul Ackford, the former England rugby international, is the most recent example of a performer who can hack it. Usually, however, the rule is simple: the most detached, and therefore the best writers on sport — like the best writers on politics, the performing arts, or whatever — are journalists. Men such as Alan Lee and Paul Hayward, the current Sports Journalists of the Year, developed their skills over years of observation and practice.

Not everybody can do it, and if anybody should know that it is Simon Kelner, the editor of the Independent, who insisted on Fraser's appointment. A few years ago Kelner lamented that it was increasingly difficult to recruit young sports journalists of the necessary quality from the provinces. I wonder why? Could it be that, every time a newspaper prefers an amateur to a professional, those young men and women see their own chances of promotion recede, and decide that they would rather do something else?

Kelner made his reputation as a vigorous, and much-admired sports editor. What a pity that, as an editor, he has turned his back on the journalists he used to champion. No good can come of it.