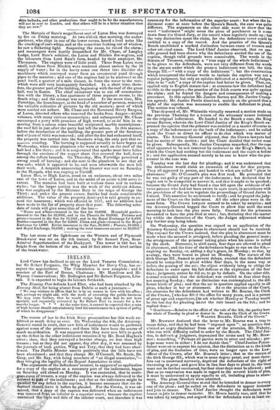 Page 2, 18 November 1843 — The Marquis of Bate's magnificent seat of Luton Hoo was
Close

The Marquis of Bate's magnificent seat of Luton Hoo was

destroyed by fire on Friday morning. At two o'clock that morning, the under- gardener, who slept in one of the lower rooms, beard a loud noise like the cracking of cart-whips, and at the same time looking out of window, he saw a flickering light. Suspecting the cause, he raised the alarm ; and messengers were hastily despatched for Mr. Chase, of Langley Lodge, Lord Bute's solicitor, the Luton and Hitchin fire-engines, and the labourers from Lord Bute's farm, headed by their employer, Mr. Thompson. The engines were of little avail. Those from Luton were small, and those from Hitchin were rendered almost useless by the ill supply of water ; for in the hurry some one threw into disorder the machinery which conveyed water from an ornamental pond through pipes to the mansion ; and one of the engines had to be stationed at the pond itself, a quarter of a mile distant, to force the water to the rest ; which were still very inadequately furnished. In a short time, there- fore, the greater part of the building, beginning with the roof of the great hall, was in flames. The chief endeavour was to cat off communica- tion with the library, a fine apartment of three separate rooms, in the South wing ; and the attempt was successful. In the mean time, Mrs. Partridge, the housekeeper, at the head of a number of persons, removed the valuable collection of pictures by the old masters ; most of which were carried out unhurt. Mr. Chase and the Reverend Henry Burgess, of Luton, directed others who removed the books from danger-40,000 volumes, with many curious manuscripts ; and subsequently Mr. Chase encouraged a party with promises of high reward, to assist him in re- moving from a saloon some beautiful sculptured marble mantelpieces : the roof fell in just after the party had left the saloon. In this manner, before the destruction of the building, the greater part of the furniture and objects of viral was removed ; and after the fire had exhausted itself, the property was carried into the Southern wing, the only part that re- melt:ea standing. The burning is supposed actually to have begun on Wednesday, when some plumbers who were at work on the roof of the hall had a fire there ; and it is conjectured that sparks must have fallen through the crevices of the copper sheet that covered the hall, down among the rafters beneath. On Thursday, Mrs. Partridge perceived a strong smell of burning; and she sent to the plumbers to see that all was safe; which it appeared to be, and soon afterwards the men left their work. A despatch announcing the disaster was sent on Saturday to the Marquis, who was staying at CardifE Luton Boo, or High Luton, stood on an eminence, about two miles east of the town of Luton, and in the midst of an estate 4,500 acres in extent The mansion had been built at various times and in various styles ; hut the larger portion was the work of the architect Adams, who was employed by the Minister Bute in the reign of George the Third ; and under the present owner, Smirke had made considerable additions. The value of the property destroyed is said greatly to ex- ceed the insurance; which was effected in 1817, and no addition had been made to the list of property since that year. The following sche- dule of totals will give some idea of the loss-