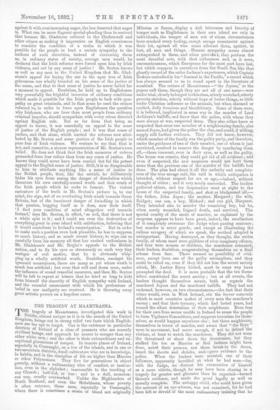 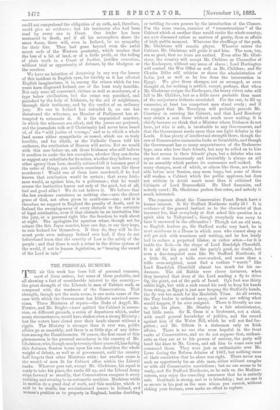 THE TRAGEDY AT MAAMTRASNA.

THE tragedy at Maamtrasna, investigated this week in Dublin, almost unique as it is in the annals of the United Kingdom, brings out in strong relief two facts Which English- men are too apt to forget. One is the existence in particular districts of Ireland of a class of peasants who are scarcely civilised beings, and approach far nearer to savages than any other white men ; and the other is their extraordinary and ex- ceptional gloominess of temper. In remote places of Ireland, especially in Connaught, on a few of the islands, and in one or two mountain districts, dwell cultivators who are in knowledge, in habits, and in the discipline of life no higher than Maories or other Polynesians. They live for generations in abject poverty, without a rudimentary idea of comfort, or instruc- tion, even in the alphabet ; inaccessible to the teaching of any Church; half-fed, or less' and in a dull, monoton- ous way, cruelly overworked. Unlike the Highlanders of North Scotland, and even the Hebrideans, whose poverty is often extreme, these men, especially in Connaught, where there is sometimes a strain of blood not originally Milesian or Saxon, display a dull bitterness and ferocity of temper such as Englishmen in their own island see only in individuals, the temper of men out of whom circumstances have crushed every feeling, except savage resentment against their lot, against all who come athwart them, against, in fact, all men and things. • Human sympathy seems almost extinguished in them, and when provoked, they perform the most dreadful acts, with that callousness and, as it were, unconsciousness, which Europeans for the most part have lost, but which reappear in narratives from the South Sea like that ghastly record of the sailor Jackson's experiences, which Captain Erskine embodied in his "Journal in the Pacific," a record which has always seemed to us to stand apart in the literature of mankind. The cotters of Maamtrasna—.44 the Joyces," as the papers call them, though they are not all of one name—now under trial, clearly belonged to this class, utterly wretched, utterly poverty-stricken, utterly without hope of better things, as little under Christian influence as the animals, but when alarmed or excited, dully ferocious and bloodthirsty. Some of them were, it is believed, implicated in some way in the murder of Lord Ardilaun's bailiffs, and knew that the police, with whom they were always at war, suspected them. They also either knew or suspected that some one member of a neighbouring family, also named Joyce, had given the police the clue, and could, if willing, supply still further evidence. They did not know, however, which member of the family was the guilty party, and therefore, under the guidance of two of their number, one of whom is just convicted, resolved to remove the danger by murdering them all,—those innocent, even in their eyes, as well as the guilty. The house was remote, they could get rid of all evidence ; and even if suspected, the new suspicion would not hurt them more than the previous one of the murder of the bailiffs had done. The plan had about it all the audacity and complete- ness of the true savage raid, the raid in which extirpation is intended, without respect for sex or age,—indeed, without thought of either ; and it very nearly succeeded. The leaders gathered others, and ten desperadoes went at night to the house of the suspected family, and shot or bludgeoned all,— the father, John Joyce ; the mother, Margaret ; the wife, Bridget; one son, a boy, Michael ; and one girl, Margaret. They intended also to murder the remaining boy, but he, when sorely wounded, feigned death, and survived. The special cruelty of the mode of murder, as explained by the surgeons, appears to have been great, indeed, the recollection of it completely overcame the Judge when passing sentence ; but murder is never gentle, and except as illustrating the callous savagery of which we speak, the method adopted is unimportant. Having destroyed, as they thought, the entire family, of whom most were guiltless of even imaginary offence, and four were women or children, the murderers retreated, their leaders, doubtless, congratulating themselves on a final release from fear. There seemed no possibility of evid- ence, except from one of the guilty accomplices, and they could be relied on, even if they did not fear the secret society which, Mr. Justice Barry hinted, must in some way have prompted the deed. It is more probable that the ten them- selves constituted the secret society ; but at all events, the leaders thought themselves secure, both as regards the murdered Joyces and the murdered bailiffs. They had not reckoned, however, on two circumstances,—the fact that their crime would, even in West Ireland, stir the horror naturalis which in most countries makes of every man the murderer's enemy ; and that their tyranny, which had lasted years, had roused the silent detestation of their neighbours. Even fear for their own lives seems unable in Ireland to rouse the people to form Vigilance Committees, and suppress terrorism for them- selves, as would happen anywhere else ; but three neighbours, themselves in terror of murder, and aware that "the Boys " were in movement, had nerve enough, if not to defend the victims, at least to watch the murderers. They did not warn the threatened or shoot down the threateners, but they stalked the ten as Maories or Red Indians might have done, noted their persons, saw them break-in the doors, heard the shouts and shrieks, and—gave evidence to the

police. When the leaders were arrested, one of their followers, apparently horrified at what he had seen—for, with the Judge, we distrust his exoneration of himself as a mere vidette, though he may have been sharing in a tragedy far greater and gloomier than he expected—turned Queen's evidence, and made the proof legally as well as morally complete. The unhappy child, who could have given the account of an eye-witness, was not examined, for he had been left so devoid of the most rudimentary training that he could not comprehend the obligation of an oath, and, therefore, could give no evidence ; but his testimony also had been read by every one in Court. One leader has been sentenced to death, and if all his accomplices share the same doom, there will, even in Ireland, be no sympathy for their fate. They had gone beyond even the awful secret code of the Western peagantry, which teaches that the loss of a bit of land, or of a little profit, or the telling of plain truth in a Court of Justice, justifies execution, without trial or opportunity of defence, by the bludgeon or the revolver.

We have no intention of deepening in any way the horror of this incident in English eyes, for terribly as it has affected English imaginations it is, among the crimes which for two years have disgraced Ireland, one of the least truly horrible. Not only were all concerned, victims as well as murderers, of a type below civilisation, but the crime was punished, and punished by the help of Irishmen, by the aid of neighbours, through their testimony, and by the verdict of an ordinary jury. No one in Ireland has defended it, no one has threatened the witnesses, no Member of Parliament has at- tempted to extenuate it. It is the unpunished murders, in which the witnesses are silent, and the jurors are perjured, and the journalists talk as if Christianity had never been heard of, of the "wild justice of revenge," and as to which a whole land seems either sympathetic or cowed, which are so truly horrible, and for which, as the Catholic Canon told his audience, the retribution of Heaven will arrive. But we would with this case before us, ask those Irishmen who still believe it needless to make the law executive, whether they can devise or suggest any substitute for its action, whether they believe any other agency than Law, steadily enforced till it becomes part of the order of things, can awaken conscience in men like these murderers ? Would one of them have murdered, if he had known that retribution would be certain ; that every Irish- man would, as against him, be a policeman ; that he would arouse the instinctive horror not only of the good, but of all, bad and good alike ? We do not believe it. We believe that the law awakens conscience as nothing else—save the direct grace of God, not often given to murderers—can; • and it is therefore we support in England the penalty of death, and in Ireland the sweeping-away of every obstacle to the certainty of legal retribution, even if that obstacle be an institution like the jury, or a personal right like the freedom to walk about at night. The apologists for agrarian crime, though not for crimes like this Joyce murder, hope one day, or say they hope, to rule Ireland for themselves. If they do, they will be the worst pests even unhappy Ireland ever had, if they do not beforehand learn that the sanctity of Law is the safety of the people ; and that there is such a crime in the divine system of the world, if not in human legislation, as "bearing the sword of the Lord in vain."