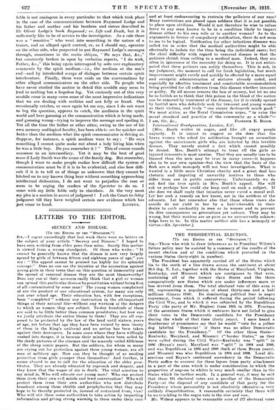 (To THE EDITOR OF THE " SFECILTOIL"3 regret exceedingly that last week there were no letters on the subject of your article "Secrecy and Disease." I hoped to have seen writing from abler pens than mine. Surely this matter is viewed from a wrong standpoint. Of those who write: "it cannot be 'generally known that the disease is now very largely spread by girls of between fifteen and eighteen years of age," you say : "The appeal cannot be praised too highly for its splendid courage." Does no one see the injustice of the accusation against young girls in their teens that on this question of immorality and the spread of venereal disease they are the most blameworthy? Does any one of their accusers really think that a girl or woman can spread this particular disease by prostitution without being first of all contaminated by some man? The young women complained of are the product of our educational system, for many are only jest over school age. Their education has, with few exceptions, been " completed" without any instruction in the all-important things of their natural life—without any warning of the dangers to which as women they are subject. To-day hundreds of them are said to be little better than common prostitutes; but how can we justly attribute the entire blame to them? They are all supposed to be protected by the law of the land until sixteen years a age, yet before that age they have been ruined by men (many ef them in the King's uniform) and no action has been taken against their destroyers. In some cases where they have willingly rushed into danger, it is because their minds have been soiled by the shady pictures of the cinemas and the scarcely veiled filthiness of the cheap comic papers. But the soldiers, for whom so many are crying out for protection against these young woman, are all men of military age. How can they be thought of as needing protection from girls younger than themselves? And further, it seems absurd to me to call for the education of the older prosMutes. They are already educated by reproach and despair, and they know that the wages of sin is death. The vital question to my mind is, Who will educate our young men? Who can protect them from their own evil minds and lewd conversation? Who will protect them from their own authorities who now distribute broadcast among them shields and prophylactics that they may hope to be thereby protected in, instead of restrained from vice? Who will stir these same authorities to take action by imparting information and giving strong warning to those under their care and at least endeavouring to restrain the polluters of our race? Many restrictions are placed upon soldiers that it is not possible to place upon civilians. Would it not therefore be wise to refuse leave to any man known to be in a condition likely to impart disease either to his own wife or to another woman? As to the arguments in favour of compulsory notification, these do not seem to me to be logical. Notification for other infections diseases was called for in order that the medical authorities might be able effectually to isolate for the time being the individual cases; but the chief difficulty with regard to venereal disease is that the patients shrink from calling in a medical man. Indeed, they are often in ignorance of the necessity for doing so. It is not anticipated that these patients can notify themselves. This is not, in my judgment, the moment to call for fresh legislation, but much improvement might surely and quickly be effected by a more equal and energetic administration of statutes already coded, and especially by effective treatment and comfortable accommodation being provided for all sufferers from this disease whether innocent or guilty. By all means remove the ban of secrecy, but let no one be so foolish as to think that this poison in the blood of the nation can be removed by treatment of the disease, for it is chiefly spread by lustful men who definitely seek for innocent and young women as their victims, and truly " one sinner destroyeth much good." We must strive, as the Royal Commission urges, " to raise the moral standard and practice of the community as a whole."— I am, Sir, &c., FLORENCE E. Boom International Headquarters, London, E.C.

[Mrs. Booth writes in anger, and like all angry people unjustly. It is unjust to suggest as she does that the brave women who asked for notification brought an accusation against the unfortunate girls who are infected by this terrible disease. They merely stated a fact which cannot possibly be denied. Mrs. Booth's attempt to treat all the girls as injured innocents is most unwise. That they are usually -less to be blamed than the men may be true in many cases—it happens also to be our own opinion—but the view that the lusts of the flesh are a male monopoly will not bear investigation. What is wanted is a little more Christian charity and a great deal less rhetoric and imputing of unworthy motives to those who differ from one in public controversy. Unfortunately we do not find the true spirit in Mrs. Booth's appeal. She will ask us perhaps how could she keep cool on such a subject. If she does we shall reply that injustice never cured a moral evil. Let her seek a remedy on her knees, not in the artifices of the advocate. Let her remember also that those whose views she assails do not yield to her by a hair's-breadth in their desire to curb unchastity in men or in women and to prevent its dire consequences on generations yet unborn. They may be wrong, but their motives are as pure as we unreservedly acknowledge hers to be. In this matter neither side has a monopoly of virtue.—En. Spectator.]