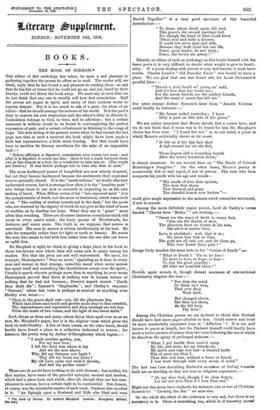 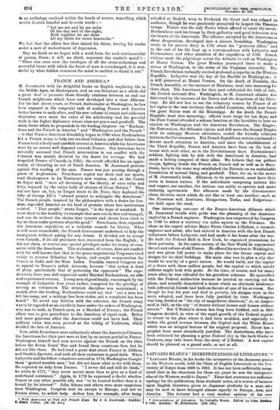 THE BOOK OF SORROW.*

THE editor of this anthology has taken, he says, a sad pleasure in gathering together the poems he offers us to read. The reader will, we tbinlr, reply that he has found a sad pleasure in reading them—so sad that he laas felt at times that he could not go on, and yet, lured by their beauty, could not throw the book away. We must say at once that we do not think that any one in trouble will here find consolation. Half the poems are pagan in spirit, and many of their authors wrote to express despair. But it is too much to ask of a poet—let alone of an editor—that he should assuage the sorrows of the world. It is the poet's duty to express his own inspiration and the editor's duty to discern it. Consolation belongs to God, to time, and to affection ; but a certain easement is without doubt to be found in contemplating the perfect expression of pain, and a certain refreshment in listening to the songs of hope. The first feeling of the present writer when he had turned the last page was that at such a moment the book might have boon made a little less representative, a little more bracing. But that would have been to sacrifice its literary excellence for the sake of an impossible task :— " Before affliction is digested, consolation ever comes too soon—and after it is digested, it. comes too late : there is but a mark between these two as fine almost as a hair, for a comforter to take aim at. (The words are Stern's.) It was better perhaps not to take aim than to miss."

The more hackneyed poems of Longfellow are now utterly despised, but yet they became hackneyed because the sentiments they expressed were so generally shared. It is the" bards sublime " no doubt who best understand sorrow, but it is strange how often it is the " humbler poet" who brings tears to our oyes or succeeds in imparting to us his own sinking of heart. When Milton writes of his "late espoused saint" it is the paraphernalia of death, not the sense of desolation, which takes hold of us. "The wailing of wisdom sounds sad in the dark," but the poets who are obsessed by the dignity of death do not give us the relief of tears or madden us by stealing our hope. What they say is" great" more often than touching. There are of course immense exceptions which will occur to every man's mind ; the Lucy poems of Wordsworth, for instance, and many more. The truth is, we suppose, that sorrow is uncritical. The man in sorrow is seldom intellectually at his best. He asks for sympathy rather than for light or truth or beauty. He wants the man who seems to feel with him rather than the one who can brace or uplift him.

Mr. Macphail is right,we think,in giving a large place in his book to those less-known men whose lines will come now to many among his readers. Not that the great are not well represented. We have, for example, Shakespeare's "Fear no more," appealing as it does to every man and woman in that strange, unearthly mood when acute sorrow has spent itself and something like thankfulness creeps over the spirit ; Claudio's speech wherein perhaps more than in anything he ever wrote Shakespeare proved that there in nothing new in human nature or nothing that he had not foreseen ; Donne's superb sonnet "Death thou shalt die"; Spenser's "Daphnaida" ; and Shelley's exquisite "Stanzas," whose last verse is perhaps as musical as anything even Shelley ever wrote :— "Thou in the grave shalt rest—yet, till the phantoms flee, Which that house and heath and garden made dear to thee erewhile, Thy remembrance and repentance and deep musings are not free From the musk of two voices, and the light of one sweet smile."

Such things as these and many others throw their spell over us as we turn Mr. Macphail's pages, but it is the slighter verse which gives the book its individuality. A few of these verses, on the other hand, should hardly have found a place in a collection dedicated to sorrow ; for Instance, the pretty song by Arthur O'Shaughnesay which begins :— "I made another garden, yea, For my new love ; I left the dead rose where it lay And set the now above.

Why did my Summer not begin ? Why did my heart not haste ?

My old Love came and walled therein, And laid the garden waste."

These vers de acreitte have nothing to do with distress ; but neither, for that matter, have some of the graceful epitaphs, ancient and modern, which find a place here, and which; after all, though they are but compliments to sorrow, have a certain right to be represented. Ben Jonson, of course, was the inimitable master of such verse. Crashaw also excelled In it. "An Epitaph upon a Husband and Wife who Died and were Buried Together" is a very good specimen of this beautiful ,manufacture :—

"To these, ;whom death again did wed, This grave's the second marriage-bed. For though the hand of Fate could force 'Twixt soul and body a divoree, It could not sever man and wife, Because they both lived but one life. Peace, good reader, do not weep ; Peace, the lovers are asleep!"

Directly an editor of such an anthology as this busies himself with the lesser poets it is very cliffioult to decide what weight to give to familiarity. If a poem dealing with sorrow is very well known, it must have merits. Charles Lamb's "Old Familiar Faces" was bound to have a place. We are glad that one was found also for Louis Stevenson's parallel lines :— " There's a rival bauld wi' young an' auld, And it's him that has bereft me; For the surest friends are the mildest friends, And the insist o' mines hae left me."

For utter despair Arthur Symona's lines from " Amorin Victims could hardly be bettered :— "My future ended yesterday ; I have Only a past on this side of the grave."

We are rather surprised that Moore should find a corner here, and we do not think that if room was to be found for him Mr. Maephail's choice has been wise. "I found her not" is, to our mind, a poem in which Moore's artificiality shows at its worst.

"It felt as if her lips had shed A sigh around her are she fled, There lingers still a trembling breath After the note's luxurious death," is almost nauseous. So are several linos on "The Death of Colonel Bainbridge's Daughter." On the other hand, Moore's poetry is occasionally full of real regret, if not of sorrow. The man who thus compares his youth with his age and recalls " The words of love then spoken, The eyes that shone Now dimmed and gone, The cheerful hearts now broken " could give magic expression to the sadness which resembles sentiment, if not to sorrow.

"Sweet are the ways of death to weary feet, Calm are the shades of men, The phantom fears no tyrant in his seat, The slave is master then.

Love is abolished ; well, that is SO ;

We know him beat as Pain.

The gods are all cast out, and let them go,

Who ever found them gain t" George Croly touches the same note in his "Genius of Death" se " What is,Death? 'Ti. to be free!

No more to love, or hope, or fear— To join the great equality : All alike are humbled there I" Herrick again sounds it, though distant murmurs of conventional Christianity disguise the tone :— " Nor does she mind Or think on't now, That ever thou West kind.

But changed above, She likes not there, As she did here, Thy love."

Among the Christian poems we are inclined to think that Herbert should have had more pages allotted to him. Could sorrow and trust be more wonderfully expressed than in " Affliction " ? It is too well known to quote at length, but the Psalmist himself could hardly have made a better picture of misery than the verse following the one in which he describes the agony of prolonged sickness :— " When I got health thou took'st sway My life, and more, for my friends die. My mirth and edge was lost—a blunted knife Was of more use than I.

Thus thin and lean, without a fence or friend, I was worn through with every storm of mind."

The last two tnea describing Herbert's revulsion of feeng towards faith are as startling as they are true to religious experience :— " Ah my dear God, though I be clean foret, Lot me not love Thee ' I love Thee not.

Might not this poem have replaced, for instance, one or two of Christina Rossetti's ? "Crossing the Bar" we miss also.

On the whole the effect of the collection is very sad, but there line monotony in it. There is something, too, which is of necessity unreal

In an anthology confined within the bonds of sorrow, something which recalls Keats'. fanciful and feverish words :— " Let me see and let me write Of the day and of the night, Both together let me slake

All my thirst for sweet heartache.–

We feel that the editor has thus slaked his thirst, leaving his reader under a sort of enchantment of depression.

May we finish as we began with a word from the arch-sentimentalist nf genius, Stem; it will, we think, represent the reader's mood ?— " When one runs over the catalogue of all the cross-reckonings and sorrowful items with which the heart of man is overcharged, it is wonderful by what hidden resources the mind is enabled to stand it out."