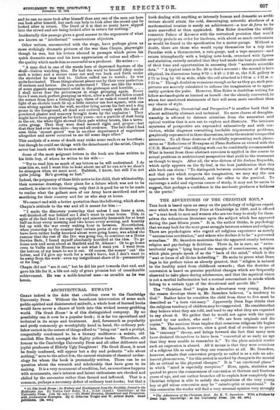 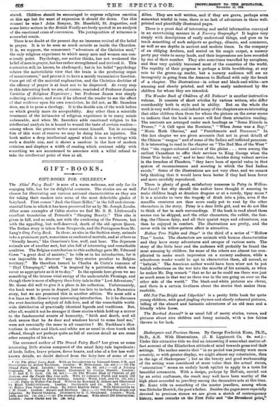 THE ADVENTURES OF THE CHRISTIAN SOUL.*

Tins book is based upon an essay on the psychology of religious experience which won the Burney Prize at Cambridge in 1908, and is offered as "a text-book to men and women who are too busy to study for themselves tho voluminous literature upon the subject which has appeared during the past fifteen years." It I., the author thinks, in psychology that we may look for the next groat struggle between science and religion. There are psychologists who regard all religious experience as merely "unconscious cerebration," and ethers who declare it to be "a perverted sexualism." Mr. Saunders maintains that the apparent enmity between religion and psychology is fictitious. There is, ho is sure, an "extraterritorial region" lying beyond the margin of oonsciousness, s region which plain _people speak of as the "back of the mind," which is the "seat or locus of all divine indwelling." He seeks to prove what Dean Inge in his preface takes as already granted, that "religion is natural to the healthy mind from childhood onwards ; that the doctrine of conversion is based on genuine psychical changes which aro frequently observed to take place during adolescence, and that the mystical vision is not a morbid hallucination but a normal ooncomitant in minds which belong to a certain type of the devotional and ascetic life."

The "Christian Soul" begins ita adventures very young. Before the reason develops there is, Mr. Saunders believes, "a tendency to God." Rather later ho considers tho child from three to five must be described as "a born visionary." Apparently Dean Ingo thinks that the religious tendency of children may be exaggerated. He considers that they believe what they are told, and tend to say what they are expected to say about it. We gather that ho would not agree with the cynic quoted by our author, who said : " Wo are born originals and die copies." The cautious Dean implies that conscious religious life begins late. Mr. Saunders, however, cites a good deal of evidence to prove his " visionary " theory, and brings forward the fact that many men have declared themselves to have been "converted at so early an ago that they were unable to remember it." To the plain-minded reader such an expression is absurd. All it means is that they were conscious of a religious life as early as they can remember at all. Mr. Saunders, however, admits that conversion properly so called is as a rule an adolescent phenomenon, "for this period is marked by changes in the mental life as critical as the physical changes." It is" an emotional phase" in which "mind is especially receptive." Hero, again, statistics are quoted to prove the commonness of conversion at thirteen and fourteen years of age, and our author branches off to explain how completely the Christian religion is able to satisfy the aspirations of the very young boy or girl whose conversion may be "catastrophic or emotional." In this connexion the reader will find a very unusual opinion very strongly stated. Children should be encouraged to express religious emotion at this age lest for want of expression it should die down. Can this counsel be wise ? John Bunyan, Mr. Maaefield, St. Augustine, and some letter-writers in the British Weekly are freely quoted in an analysis of the emotional crisis of conversion. The juxtaposition of witnesses is somewhat comb.

There is no doubt at the present day an immense revival of the belief In prayer. It is to be seen as much outside as inside the Churches. It is, we suppose, the commonest "adventure of the Christian soul," the only religious experience to which many men and women can coneciously point. Psychology, our author thinks, has not weakened the belief of men in prayer, but has rather strengthened and revived it. This contention will, he knows, be challenged ; but in his belief "psychology refutes the materialistic view that the brain is the producing organ of oonscioutmess," and proves it to have a merely transmissive function. Once get rid of the material explanation, and the Christian doctrine of the efficacy of prayer is at least not to be disproved. At every step in this interesting book we are, of course, reminded of Professor James's Varieties of Religious Experience ; but Professor James was simply collecting evidence, and even if he allowed the reader to see the effect of that evidence upon his own conviction, he did not, as Mr. Saunders does, use it to press a theology. It is the double aim of the work before us which greatly mars its acceptability. Any other than a scientific treatment of the intimacies of religious experience is to many minds unbearable, and when Mr. Saunders adds emotional religion to his intellectual analysis he is bound to wound the taste of certain readers— among whom the present writer must count himself. Yet in accusing him of this want of reserve we may be doing him an injustice. His book makes a deep intellectual appeal which is rare in writings with such a double aim, and it shows a candour in the face of modern criticism and displays a width of reading which contrast oddly with something we are accustomed to associate with a wilful refusal to take the intellectual point of view at all.