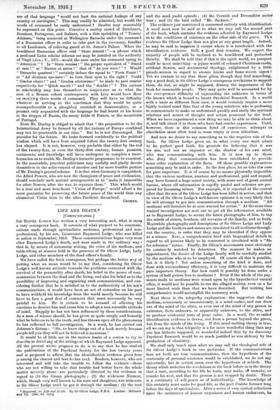 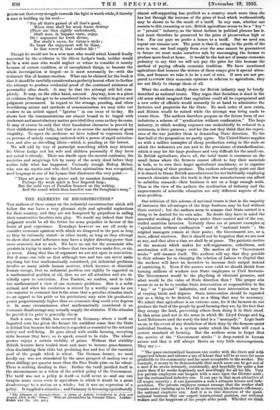 a very interesting and, what is more a very courageous book. It consists of what purport to be communi_ cations made through spiritualistic mediums, professional and nonprofessional, by his son, Lieutenant Raymond Lodge, who was killed in action in September, 1915. These communications began very soon after Raymond Lodge's death, and were made in the ordinary way ; that is, by means of automatic writing, the voice of the medium, and table-tilting at seances held in the presence of Sir Oliver Lodge, Lady Lodge, and other members of the dead officer's family.

We have called the book courageous, but perhaps the better way of putting what we mean would be to say that, considering Sir Oliver Lodge's well-known attitude towards the problems connected with the survival of the personality after death, his belief in the power of communication between the dead and the living, and also his belief as to the possibility of improving and organizing such communication, and considering further that he is satisfied as to the authenticity of his son's communications, it would have been an act of cowardice on his part to have withheld his knowledge from the world merely because he will have to face a good deal of comment that must necessarily be very painful to him. He is certain to be accused of allowing his emotions to deceive him and cause him to adopt a non-scientific attitude of mind. Happily he has not been influenced by these considerations. As a man of science should, he has given us quite simply and honestly what he believes to be the truth, and has thrown open all the phenomena he has collected to full investigation. In a word, he has carried out Johnson's dictum : "Sir, to leave things out of a book merely because people tell you they will not be believed is meanness."

It would be of little use in the narrow limits of a review to try to describe in detail any of the sittings at wlich Raymond Lodge appeared. All the present wr:ter proposes to do is to say that he has stud'ed the publications of the Psychical Society for the last twenty years and is prepared to affirm that the identification evidence given here is among the clearest and best h3 has read. Readers, however, who are interested and will take the trouble to follow the evidence —those who are not willing to take that trouble had better leave the whole matter severely alone—are particularly directed to the evidence in regard to (1) the Group photographs ; (2) the nickname Norman, which, though very well known to his sons and daughters, was unknown to Sir Oliver Lodge until he got it through the medium; (3) the tent

and the sand yacht episode ; (4) the Cornish and Devonshire motor tour; and (5) the bird called "Mr. Jackson."

The evidence just mentioned is concerned entirely with identification. A word must now be said as to what we may call the second part of the book, which contains the evidence afforded by Raymond Lodge as to the conditions of existence on the other aide of the grave. The evidence Sir Oliver Lodge dams not give at any great length. Indeed, he may be said to suppress it except where it is interlocked with the identification evidence. Still, a good deal remains. We expect the majority of people will be inclined to be bewildered and perturbed thereby. We shall be told that if this is the spirit world, no prospect could be more uninviting—a jejune world of coloured Christmas-cards, artificial flowers, and sentimental theology, enlightened by a little pseudo-science in regard to atomic bricks and fume-woven cigars I Yet we venture to say that these gibes, though they find something, nay a good deal, in Sir Oliver Lodge's courageous revelations to support them, do not, as might be supposed, destroy the importance of the book for reasonable people. They may quite well be accounted for by the ever-present difficulty of expounding the unknown in terms of the known which is bound to haunt Psychical Research. In a world with a basis so different from ours, it would certainly require a more highly trained mind than that of the young subaltern who is professing to communicate to make us understand quickly and easily the spiritual relations and means of thought and action possessed by the dead.

When we have experienced a now thing we may be able to think about it, and talk about it to those who have had similar experiences. Until, however, there is this common bond of experience, attempts at elucidation mud often tend to seem empty or even ridiculous.

And now we desire to say something as to. the negative aide of the book. Sir Oliver Lodge gives us, in what every one must admit to be perfect good faith, his grounds for believing that it was his son, and not an impostor or the shadow of his own mind, who was communicating with him. It is now up to those who deny that communication has been established to provide some other explanation of the facts. Of these possible explanations something may be said in order. In the first place, let us take the case for pure imposture. It is of course by no means physically impossible that the various mediums, amateur and professional, paid and unpaid, may have formed a huge secret society, with some sort of great central bureau, where all information is rapidly pooled and schemes are pre pared for hamming sitters. For example, it is reported at the central office that the son of Sir Oliver Lodge has been killed in action, and that in view of Sir Oliver Lodge's well-known opinions it is very likely that

he will attempt to get into communication through a medium. "All mediums will therefore be at once warned for action." At the same time

trained investigators are sent out to get all the information available as to Raymond Lodge, to secure the latent photographs of him, to tap the minds of sisters, brothers, old servants of the family, and so forth.

Meanwhile photographs and descriptions of Sir Oliver Lodge and Lady Lodge and the brothers and sisters are circulated to all mediums throughout the country, in order that they may be identified if they appear at a séance. Next, a comprehensive brief with biographical details in regard to all persons likely to be concerned is circulated with a "file for reference" notice. Finally, Sir Oliver's movements must obviously be constantly watched by detectives. The moment he makes an appointment, the dossier of the Lodge family will be carefully studied by the medium who is to be employed. Of course all this is possible, but is it likely ? Yet unless something of the kind is done, and done with extraordinary efficiency, it is very difficult to maintain the pure imposture theory. But how could it possibly be done under a system of half-guinea fees to mediums ? Even if the whole of the payments made to mediums were seized upon by the hypothetical central office, it would not be possible to run the alleged society, even on a far more limited scale than that we have described. But nothing less comprehensive would accomplish the necessary work.

identification evidence is drawn, not from a person beyond the grave,

but from the minds of the living. If this mind-sucking theory is true, all we can say is that telepathy is a far more wonderful thing than any

one has hitherto supposed, so wonderful indeed that by its discovery Psychical Research would be as much justified as was alchemy by the production of chemistry.

We shall only touch upon what we may call the theological side of Sir Oliver Lodge's book in one particular. If the communications here set forth are true communications, then the hypothesis of tho continuity of personal existence would be established, we do not say universally, but in certain cases, over the hypothesis of rebirth. Tho theory which underlies the revelations in the book before us is the theory that a man, according to the life he leads, may make, o* unmake, or remake his soul, and that the process is not stopped by death. There is a continuity of will-power as of individuality. The knowledge of this certainty must make for good life, as the poet Crabbo foresaw long before the days of spiritualists. After a series of very cynical reflections upon the uselessness of human experience and human endeavour, he

points out that every struggle towards the light is worth while, if thereby • man is building up his soul:— " For all that's gained of all that's good, When time shall his weak frame destroy (Their use then rightly understood), Shall man, in happier state, enjoy. Oh ! argument for truth divine, For study's cares, for virtue's strife ; To know the enjoyment will be thine, In that renew'd, that endless life ! "

Though he would not be a wise man who would admit himself finally converted by the evidence in Sir Oliver Lodge's book, neither would he be a wise man who would neglect or refuse to consider it merely because of certain crudities, or of unexplained things, or because the whole investigation is tinged—as it must necessarily be—with the iridescent film of human emotion. What can be claimed for the book is that it should be carefully consideredasa perfectlyhonest effort to further the attempt to produce evidential proof of the continued existence of personality after death. It may be that the attempt will fail completely. It may, on the other hand, succeed. Anyway, here is a piece of evidence that has got to be considered before the verdict is given and judgment pronounced. In regard to the strange, pleating, and often bewildering nature and methods of communication we may refer our readers to an article signed " Ignotus " in our issue of to-day. He shows how the communications are almost bound to be tinged with irrelevant and unsatisfactory matter provided they come as they do come. It may of course be said that their fraudulent character is proved by their childishness and folly, but that is to accuse the mediums of great stupidity. To upset the mediums we have indeed to represent them as persons of unholy cunning endowed with a power of rapid ratiocination and also as drivelling idiots—which is puzzling at the lowest.

We will add by way of postscript something which may interest Sir Oliver Lodge and his wife and children personally if they have not noted it already. Their son dwells upon the mental confusion, the anxieties and misgivings felt by many of the newly dead before they realize fully what has happened. Curiously enough Bishop Heber, who was no mystic and who died before spiritualism was recognized, used language in one of his hymns that illustrates this very point:— " Thou art gone to the grave: and, its mansion forsaking, Perhaps thy weak spirit in fear lingered long ; But the mild rays of Paradise beamed on thy waking, And the sound which thou he,ard'st was the Seraphim's song."