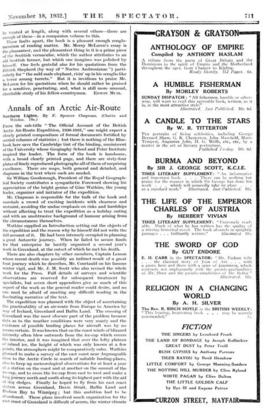 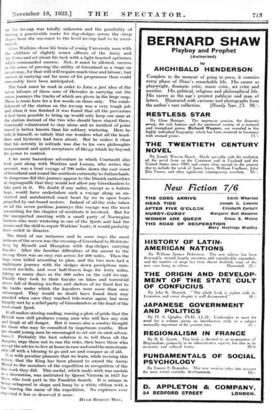 Annals of an Arctic Air-Route

FROM the sub-title "The Official Account of the British Arctic Air-Route Expedition, 1930-1931," one might expect a closely printed compendium of formal documents fortified by serried columns of statistics ; but there is nothing of the Blue- book here save the Cambridge tint of the binding, reminiscent of the University whose Geography School and Polar Institute inspired the leader. The form of the book is handsome, with a broad clearly printed page, and there are sixty-four plates of finely reproduced photographs all of them of surprising excellence. There are maps, both general and detailed, and diagrams in the text where such are needed.

Sir William Goodenough, President of the Royal Geograph- ical Society contributes a sympathetic Foreword showing his appreciation of the bright genius of Gino Watkins, the young leader, organizer and initiator of the expedition.

Mr. Chapman is responsible for the bulk of the book and marshals a crowd of exciting• incidents with clearness and restraint, avoiding the undue emphasis on risks and hardships without affecting to treat the expedition as a holiday outing and with an unobtrusive background of humour arising from the circumstances themselves.

Watkins supplied an Introduction setting out the objects of the expedition and the reason why he himself did not write the full account of it. He had been intensely occupied in planning a great Antarctic journey. When he failed to secure funds for that enterprise he hastily organized a second year's work in Greenland, at the outset of which he met his death.

There are also chapters by other members, Captain Lemon whose recent death was possibly an indirect result of a great boat journey which he describes, Mr. Courtauld on his famous winter vigil, and Mr. J. M. Scott who also revised the whole work for the Press. Full details of surveys and scientific observations are reserved for subsequent treatment by specialists, but seven short appendices give as much of this aspect of the work as the general reader could desire, and no one need be afraid of meeting any difficult reading in the fascinating narrative of the text.

The expedition was planned with the object of ascertaining the practicability of an air-route from Europe to America by way of Iceland, Greenland and Baffin Land. The crossing of Greenland was the most obscure part of the problem because data as to the weather conditions were very scanty and the existence of possible landing places for aircraft was by no means certain. It was known that on the coast winds of blizzard intensity often blew outwards from the ice-cap which covers the interior, and it was imagined that over the lofty plateau of inland ice, the height of which was only known at a few . points, the atmosphere might be comparatively calm. Watkins Planned to make a survey of the east coast near Angmagsalik close to the Arctic Circle in search of suitable landing-places, also to keeli up meteorological observations for at least a year at a station on the coast and at another on the summit of the Ice-cap,_ and to cross the ice-cap from east to west and make a long journey north and south along its highest part with the aid of dog sledges. Finally he hoped to fly from his east coast htation across Greenland, Davis Strait, Baffin Land and Hudson Bay to Winnipeg ; but this ambition had to be abandoned. These plans involved much organization for the east coast of Greenland is difficult of access, the winter climate

on the ice-cap was totally unknown and the possibility of finding a practicable route for dog-sledges across the steep slopes from the sea-coast to the level ice-cap had to be ascer- tained.

Gi110 Watkins chose his team of young University men with the addition of slightly senior officers of the Army and Air Force and set about his task with a light-hearted optimism which commanded success. Not, it must be allowed, success in the sense of proving the utility of Greenland as a stage on an air-way, for that will still require much time and labour; but success in carrying out far more of his programme than could reasonably have been anticipated.

The book must be read in order to form a just idea of the seven labours of these sons of Hercules in carrying out the seven journeys the tracks of which are given in the large map. There is room here for a few words on three only. The estab- lishment of the station on the ice-cap was a very tough job and when it was finished it was found that all the provisions it had been possible to bring up would only keep one man at. the station instead of the two who should have stayed there. Courtauld volunteered to stay alone and no incident of polar travel is better known than his solitary wintering. Here he tells it himself, so calmly that one wonders what all the head- lines and hysterics had been about. But he makes it clear that his serenity in solitude was due to liis own philosophic temperament and quiet acceptance of this which lay beyond his power to control.

A far more hazardous adventure in which Courtauld also took part along with Watkins and Lemon, who writes the account, was a boat voyage of 700 miles down the east coast of Greenland and round the southern extremity to Julianehaab. So dangerous did this journey appear to the Danish authorities at Angmagsalik that they would not allow any Greenlanders to take part in it. We doubt if any sailor, except as a forlorn hope, would have undertaken such a voyage along an un- charted and uninhabited coast beset by ice in open boats propelled by out-board motors. Indeed of all the risks taken on all the seven perilous journeys this voyage was the most astonishing for the chapter of accidents it involved. But for the unexpected meeting with a small party of Norwegian hunters who were wintering in one of the fjords and had the means and the skill to repair Watkins' boats, it would probably have ended in disaster.

The third of our instances and in some ways the most arduous of the seven was the crossing of Greenland to Holstein- borg by Rymill and Hampton with dog-sledges carrying kayaks. After the familiar difficulties of the ascent to the ice-cap there was an easy run across for 300 miles. Then the dogs were killed according to plan, and the two men had a nightmare journey with the sledges down precipitous rain- washed ice-falls, and over half-frozen bogs for forty miles, taking as many days as the 300 miles on the cold ice-cap. Finally they took to their kayaks on lakes and torrential rivers full of floating ice-floes and shelves of ice fixed fast to the banks under which the kayakers were snore than once submerged. They would no doubt have found their way unaided when once they reached tide-water again, but were happily met by a relief party of Greenlanders at the head of the srest-coast fjord.

It all makes stirring reading, rousing a glow of pride that the British race still produces young men who will face any risk and laugh at all danger. But it rouses also a sombre thought for those who may be consulted by impetuous youths. How far should young men be encouraged to set out on such adven- tures? Probably the best solution is to tell them all the dangers, urge them not to run the risks, then leave those who accept the advice to live at home in ease and send the unrestrain- able off with a blessing to go and see and conquer as of old. It is with peculiar pleasure that we learn, while revising this notice, that the King has been pleased to award the Arctic Medal to the members of the expedition in recognition of the fine work they did. This medal, which ranks with war medals as a decoration, WEIS instituted by Queen Victoria in 1857 for those who took part in the Franklin Search. It is unique in being octagonak in shape and hung by a white ribbon with a bar bearing the name of the expedition. No explorers ever expected it less or deserved it more.