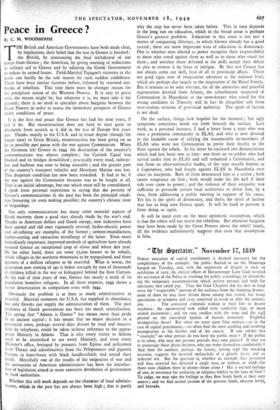 THE British and American Governments have both made clear, by implication, their belief that the war in Greece is finished : the British, by announcing the final withdrawal of our troops from Greece ; the American, by giving warning of reductions in military aid to Greece and by adjuring the Greek Government to reduce its armed forces. Field-Marshal Papagos's victories in the north can hardly be the sole reason for such sudden confidence. There have been similar victories before, followed by renewed out- breaks of rebellion. This time there must be stronger reason for the precipitate action of the Western Powers. It is easy to guess what the reason might. be, but whatever it is, we must take it for granted ; there is no need to speculate about bargains between the Great Powers in order to assess the immediate prospects of Greece under conditions of peace.

It is the first real peace that Greece has had for nine years, if real it be. But reconstruction does not have to start quite so absolutely from scratch as it did in the rest of Europe five years azo. Thanks mainly to the U.S.A. and in lesser degree (though for longer time) to Great Britain, reconstruction has been going on so far as possible pan passu with the war against Communism. When the Germans left Greece in 1944 the destruction of the country's communications was almost complete ; the Corinth Canal was blocked and its bridges demolished ; practically every road, railway- line and harbour was near to being unusable ; and the greater part of the country's transport vehicles and Merchant Marine was lost. This desperate condition has now been remedied. It had to be, if the war against the Communist invasion was to be fought at all. That is an initial advantage, but one which must still be consolidated. I speak from personal experience in saying that the poverty of Greece's communications in the past has been the principal condi- tion favouring (or even making possible) the country's chronic state of brigandage.

Not only communications but many other material aspects of Greek recovery show a good start already made by the war's end. Thanks to American dollars and Greek energy, new industries have been started and old ones vigorously revived; hydro-electric power znd oil-refining are examples of the former ; cement-manufacture, timber-cutting and extraction metallurgy of the latter. Even more immediately important, improved methods of agriculture have already ensured Greece an exceptional crop of olives and wheat this year. On the other hand, there are some 25,000 houses to be rebuilt, whole villages in the northern mountains to be repopulated, and three quarters of a million refugees to be resettled. What is worse, the generation now corning of age is below strength by tens of thousands of children killed in the war or kidnapped behind the Iron Curtain. At the end of nine years of war, Greece has nearly a tenth of its population homeless refugees. In all these respects, 1949 shows a severe deterioration in comparison even with 1944.

Obviously the problem is at least as much administrative as material. Material resources the U.S.A. has supplied in abundance, but only Greeks can supply the administration of them. The past weakness of Greek government has been too much centralisation. The saying that "Athens is Greece" has meant more than pride in an ancient capital ; it has meant that no major decision in a provincial town, perhaps several days distant by road and inacces- sible by telephone, could be taken without reference to the appro- priate Ministry in Athens. That is why every visitor to Athens used to be astonished to see every Ministry, and even every Minister's office, besieged by peasants from Epirus and policemen from Thrace and schoolmasters from the Peloponnese and gigantic Cretans in knee-boots with black handkerchiefs tied round their heads. Mercifully one of the results of the exigencies of war and the persuasion of American administrators has been the introduc- tion of legislation aimed at more extensive devolution of government to local authorities.

Whether this will work depends on the character of local adminis- trators, which in the past has not always been high ; that is partly why the step has never been taken before. This in turn depends in the long run on education, which in the broad sense is perhaps Greece's greatest problem. Education in this sense is not just a matter of conquering illiteracy, in which Greece already has a good record ; there are more important tests of education in democracy. One is whether men elected to power recognise their responsibility to those who voted against them as well as to those who voted for them ; and whether those defeated at the polls accept their defeat or plot to reverse it by force or intrigue. By this test Greece has not always come out well, least of all in provincial affairs. There are good signs now of imaginative advances at the national level, which are perhaps due largely to the inspiration of the Royal Family. But it remains to be seen whether, for all the amnesties and peaceful regeneration decreed from Athens, the schoolmaster suspected of Communism in Macedonia or the store-keeper who voted for the wrong candidate in Thessaly will in fact be altogether safe from over-zealous minions of provincial authority. The spirit of faction is not dead.

On the surface, things look hopeful for the moment ; but ugly symptoms sometimes break out from beneath the surface. Last week, as a personal instance, I had a letter from a man who was once a prominent commander in ELAS, and who is now devoted to the laudable cause of rallying the innumerable ex-members of ELAS who were not Communists to prove their loyalty to the State against the rebels. In his letter he enclosed two denunciations which had just been sent to him: one from an ex-soldier who had served under him in ELAS and still remained a Communist, and one from an ultra-nationalist leader, of the type usually known as a Capetanios, who had fought against ELAS in Macedonia ever since its inception. Both of them denounced him as a traitor ; both swore vengeance on him ; both would make his life hell if their side ever came to power ; and the violence of their antipathy was sufficient to persuade certain local authorities to debar him, by a ruse, from addressing a public meeting in support of his cause. Yet his is the spirit of democracy, and theirs the spirit of faction that has so long torn Greece apart. It will be hard to prevent it from doing so again.

It will be hard even on the most optimistic assumption, which is that the rebels will not renew the rebellion. But whatever bargains may have been made by the Great Powers above the rebels' heads, all the evidence unfortunately suggests that even that assumption is false.