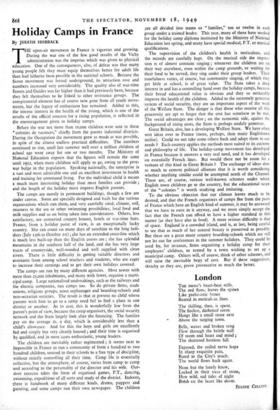 THE open-air movement in France is vigorous and growing. During the war one of the few good results of the Vichy administration was the impetus which was given to physical education. One of the consequences, also, of defeat was that many young people felt they must equip themselves better for adult life

than had hitherto been possible in the national schools. Because the Scout movement was forced underground, its attraction rose and numbers increased very considerably. The quality also of war-time Scouts and Guides was far higher than it had previously been, because they felt themselves to be linked to other resistance groups. The conspiratorial element has of course now gone from all youth move- ments, but the legacy of enthusiasm has remained. Added to this, the intense interest in the health of the young, which is one of the results of the official concern for a rising population, is reflected in the encouragement given to holiday camps.

Before the war not more than to,000 children were sent to these "colonies de vacances," chiefly from the poorer industrial districts.

During the Occupation the movement grew as much as was possible, In spite of the almost endless practical difficulties. The numbers continued to rise, until last summer well over a million children of school age went away for one or two months. The Ministry of National Education expects that the figures will remain the same until 1952, when more children will apply to go, owing to the post- war bulge in the population. Speaking nationally, the enterprise is a vast and most admirable one and an excellent investment in health and training for communal living. For the individual child it means a much more interesting holiday than most families can provide ; and the length of the holiday must impress English parents.

The camps are mostly in permanent buildings, though a few are under canvas. Some are specially designed and built for the various organisations which run them, and very carefully sited, climate, soil, nearness to the sea or other swimming possibilities, local food and milk supplies and so on being taken into consideration. Others, less satisfactory, are converted country houses, hotels or war-time huts.

France, from a holiday point of view, is an exceptionally lucky country. She can count on many days of sunshine in the long holi- days (July 13th to October 1st) ; she has an extended coast-line which is much less built-up than the English coasts are ; she has splendid mountains in the southern half of the land, and she has very large tracts of countryside, well-wooded and well supplied with clean rivers. There is little difficulty in getting suitable directors and assistants from among school teachers and students, who arc eager to increase their earnings and to get their own holidays covered.

The camps arc run by many different agencies. Most towns with more than 25,000 inhabitants, and many with fewer, organise a muni- cipal camp. Large nationalised undertakings, such as the railways and the electric companies, run camps too. So do private firms, trade unions, religious groups, town orphanages and boarding-schools and non-sectarian societies. The result is that at present no child whose parents wish him to go to a camp need fail to find a place in one district or another. As to cost, this is wonderfully low from the parent's point of view, because the camp organisers, the social security

network and the State largely look after the financing. The families pay on the average 25. a day, which is considerably less than a child's allowance. And for this the boys and girls are excellently fed and simply but very cleanly housed ; and their time is organised by qualified, and in most cases enthusiastic, young leaders.

The children are inevitably rather regimented ; it seems next to impossible in France to run a community of from a hundred to two hundred children, unused in their schools to a free type of discipline, without strictly controlling all their time. Camp life is essentially collective, but the atmosphere, of course, varies from camp to camp and according to the personality of the director and his wife. Out- door exercise takes the form of organised games, P.T., dancing, swimming, expeditions of all sorts and study of the district. Indoors, There is handwork of many different kinds, drama, puppets and painting, and some camps run their own newspaper. The children pre all divided into teams or " families," ten or twelve in each group under a trained leader. This year, many of these have worked for the holiday camp diploma instituted by the Ministry of National Education last spring, and many have special medical, P.T. or musical qualifications.

The supervision of the children's health is meticulous, and the records are carefully kept. On the musical side the impres- sion is of almost constant singing ; whenever the children are on their way anywhere, even within the camp grounds, or waiting for their food to be served, they sing under their group leaders. Their tunefulness varies, of course, but community singing, of which they get little at school, is of great value. The State takes a deep interest in and has a controlling hand over the holiday camps, because their broad educational value is obvious and they so noticeably improve the health of the children. Added to the extremely generous system of social security, they are an important aspect of the work of the Welfare State. The danger is that those who receive all this generosity arc apt to forget that the cost has somehow to be met. The social advantages are clear ; on the economic side, against the background of rising costs, the State is perhaps unduly generous.

Great Britain, also, has a developing Welfare State. We have often sent ideas over to France (more, perhaps, than many Englishmen realise). Could we not take some others back and adapt them to our needs ? Each country applies the methods most suited to its customs and philosophy of life. The holiday-camp movement has developed in France because it answers a very real need, and it has developed on essentially French lines. But would there not be room for a venture of this kind in Great Britain ? The exchange of ideas does so much to cement. political alliances that it is worth considering whether anything similar could be attempted north of the Channel. There are, of course, various well-known schemes under which English town children go to the country, but the educational scope of the " colonies " is worth studying and imitating.

To the obvious objection that our climate leaves much to be desired, and that the French organisers of camps flee from the parts of France which have an English kind of summer, it may be answered that we have to exist in it anyway, and we must simply accept the fact that the French can afford to have a higher standard in this matter (as they have also in food). A more serious difficulty is that of space. England is a crowded island, and is, at last, being careful to see that as much of her natural beauty is preserved as possible. But there are a great many country boarding-schools which are still not let out for conferences in the summer holidays. They could be used by, for instance, firms organising a holiday camp for their employees' children, or rented by a town wishing to set up a municipal camp. Others will, of course, think of other schemes, and will raise the inevitable bogy of cost. But if these suggestions, sketchy as they arc, prove provocative so much the beuer.