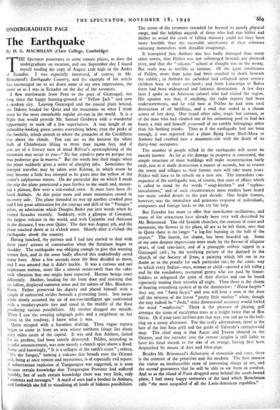 THE Spectator penetrates to some remote places, as does the undergraduate on vacation, and one September day I found myself reading the copy of August izth high in the Andes of Ecuador. I was especially interested, of course, in Mr. Brinsmead's Earthquake Country, and the example of his article has encouraged me to set down some of my own impressions, the more so as I was in Ecuador on the day of the teremoto.

I flew northwards from Peru to the port of Guayaquil, not long since the happy hunting-ground of " Yellow Jack " and now a modern city. Leaving Guayaquil and the coastal plain behind, the Dakota headed for Quito and the mountains on what I think must be the most remarkable regular air-run in the world. It is a flight that would provide Mr. Samuel Goldwyn with a wonderful opportunity to work off a few superlatives. A vast jungle of an unhealthy-looking green covers everything below, even the peaks of the foothills, which stretch to where the pinnacles of the Cordilleras rise above the clouds. You can see on the horizon the white bulk of Chimborazo lifting to more than 20,000 feet, and if you are of a literary turn of mind Bolivar's apostrophising of the mountain may occur to you—"No hay sepulcro para mi porque soy mas poderoso que la muerte." But the words lose their magic when the plane suddenly gives a series of almighty jolts. Sometimes the intrepid traveller may be taken over Kilotoa, in which event he may become a little less intrepid as he gazes into the yellow of the crater's sulphurous waters. On the particular day on which I made the trip the plane penetrated a pass further to the south and, mount- ing a plateau, flew over a red-roofed town. It must have been ill- 'fated Ambato. At this point more and more mountains crowd in on every side. The plane threaded its way up another crooked pass and I felt great admiration for the courage and skill of the " Panagra " pilots, an admiration which Douglas Bader put into words when he visited Ecuador recently. Suddenly, with a glimpse of Cotopaxi, the largest volcano in the world, .and with Cayambe and Antisana in the distance, I was over Quito. The date was August 5th, and the plane touched down at 12 o'clock noon. Shortly after z o'clock the earthquake shook the country.

Having lunched, my parents and I had just started to deal with three years' arrears of conversation when the furniture began to shudder. The earthquake was obliging enough to give this warning tremor first, and in the areas badly affected this undoubtedly saved many lives. After a few seconds more the floor decided to move, and I was amazed that it didn't buckle. It was a curious and not unpleasant motion, more like a smooth ocean-swell than the cake- walk vibration that one might have expected. Human beings react differently. Mother, heading for the front door and insisting that we follow, displayed common sense and the talents of Mrs. Blankers- Koen. Father preserved his dignity and placed himself with a couple of unhurried strides beneath a protecting lintel. Son mean- while slowly assumed the air of not-too-intelligent ape confronted with a monkey puzzle tree and stood in the middle of the floor pondering various possibilities. My mother dragged me outside. When I saw the swaying telegraph poles and a neighbour on her knees in the roadway, I knew what it was.

Quito escaped with a harmless shaking. Then vague reports began to come in from an area whose northern fringe lies about sixty miles south of the capital. It was said that Ambato, famed for its gardens, had been utterly destroyed. Pelileo, according to a radio announcement, was now merely a church spire above a flood. Some said knowingly, "It is a collapse of the earth's crust " ; others, " It's the Sangay," naming a volcano that broods over the Oriente and, being at once remote and mysterious, is of especially evil repute. A subterranean explosion of Tunguragua was suggested, as it soon became certain knowledge that Tunguragua Province had suffered terribly, but of such certain knowledge there was very little, only " rumours and messages." A maid of oursohad a brother In Ambato, and forthwith she fell to visualising all kinds of hideous possibilities. The terror of the teremoto extended far beyond its purely physical range, and the helpless anguish of those who had run hither and thither to avoid the crash of falling masonry could not have been more horrible than the miserable uncertainty of their relations torturing themselves with dreadful imaginings.

It transpired that Ambato was less badly damaged than nutty other towns, that Pelilco was not submerged beneath any diverted river, and that the " volcanic" school of thought was in the wrong. But truth was as terrible as rumour. Of the 3,500 inhabitants of Pelilco, more than 3,000 had been crushed to death beneath the rubble ; in Ambato the cathedral had collapsed upon seventy children busy at their catechism ; and from Latacunga to Banos there had been widespread and fantastic destruction. A few days later I spoke to an American colonel who had visited the region. His opinion was that, if anything, the radio reports had been understatements, and he told how at Pelileo he had seen total destruction of all buildings, and a road that ended in a chasm scores of feet deep. One heard other talcs, tragic but curious, as of the mart who had climbed out of his swimming pool to find his house a ruin and himself possessed of no earthly belongings other than his bathing trunks. Then as if the earthquake had not been enough, it was reported that a plane flying from Shell-Mora to Ambato had crashed into a mountain-side with the death of its thirty-four occupants.

The number of people killed in the earthquake will never bo exactly known. As far as the damage to property is concerned, the simple structure of most buildings will make reconstruction fairly swift, just as it made destruction a matter of seconds, but to restore the towns and villages to their former sta:c will take many years. Pelileo will have to be rebuilt on a new site. The immediate con- sequence of the earthquake was, of course, that state of affairs which is called to mind by the words " soup-kitchen " and " typhus- inoculations," and of such circumstances most readers have heard too many sordid details in the past decade. One bright feature, however, was the immediate and generous response of individuals, companies and foreign lands to the cry for help.

But Ecuador has more to offer that unwelcome oscillations, and many of her attractions have already been very well described by Mr. Brinsmead. The old Spanish churches, the contrast of coast and mountain, the flowers in the plaza, all arc as he left them, save that in Quito there is no longer " a log-fire burning in the hall of the airport." The hearth, for shame, has been boarded up. Some of my own deepest impressions were made by the flavour of alligator pears, of icod taxo-juice, and of a pineapple sorbete sipped in a Guayaquil café ; by the terrifying picture of the damned in the church of the Society of Jesus, a painting which left me in no doubt as to the penalty for each particular sin ; by the comic way in which every Indian—man, woman or child—sported a felt trilby ; and by the rondadores, nocturnal gentry who are paid by house- holders to safeguard the quiet of their district and can be heard vigorously tooting their whistles all night. Then there is the charm of hearing everything spoken of in the diminutive: "Haste luegito" they say, not "haste luego," and you will hear a man at the door call the mistress of the house "pretty little mother" when, though she may indeed be " Uncle," strict dimensional accuracy would forbid the word " madrecita." There is the pleasure of playing golf amongst the scent of eucalyptus trees at a height twice that of Ben Nevis. Or if your taste inclines you that way, you can go to the bull- ring on a sunny afternoon. For the really adventurous, there is the lure of the lost Inca gold and the guide of Valverde's centuries-old map. The chief snag is that Aucas and Jivaros abound in the Oriente, and the intruder into the remote jungles is still liable to have his head shrunk to the size of an orange, having first been despatched by means of dart and blow-pipe.

Besides Mr. Brinsmead's dichotomy of mountain and coast, there is the contrast of the primitive and the modern. The first ensures the visitor an inexhaustible store of interesting things to see, and the second guarantees that he will be able to see them in comfort. And so as the island of Puna dropped away behind the south-bound plane, I had many happy memories of the land which Bemelmans calls " the most unspoiled of all the Latin-American republics."