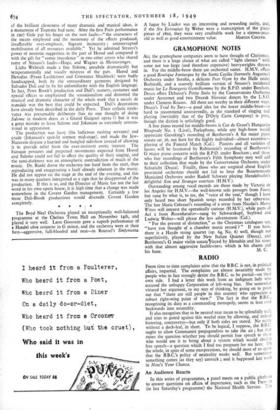 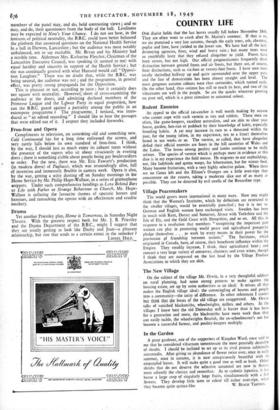 FROM time to time complaints arise that the B.B.C. is not, in political affairs, impartial. The complaints are almost invariably made by people who in fact strongly desire the B.B.C. to be partial—on their own side. I had a letter this week from an indignant lady who accused the unhappy Corporation of left-wing bias. She somewhat vitiated her argument, to my way of thinking, by going on to point out that " there are still people in this country who appreciate a robust right-wing point of view." The fact is that the B.B.C., recognising its duty as a commanding monopoly, seems to lean over backwards into neutrality. It also recognises that to be neutral may mean to be splendidly null. and tries to guard against this woeful state by allowing, and indeed fostering, controversy—but only if both sides are stated. No nettle without a dock-leaf, in short. To be logical, I suppose, the B.B.C. ought to allow Communist propagandists to take the air ; but that raises the question whether you should permit free speech to tho,c who would use it to bring about a system which would aboli'h free speech—a question which I find too pregnant for me here. On the whole, in spite of some exasperations, we should most of us agree that the B.B.C.'s policy of neutrality works well. But sometimes something comes (as they say) unstuck ; and it happened last wttk in Now's Your Chance.

An Audience Reacts • In this series of programmes, a panel meets on a public platfcrm to answer questions on affairs of importance, such as the Press cr (in last Saturday's programme) the National Health Service. The members of the panel may, and do, hold contrasting views ; and so may, and do, their questioners from the body of the hall. Liveliness may be expected in Now's Your Chance. I do not see how, in the interests of political neutrality, the B.B.C. could have better balanced the platfoim that answered questions on the National Health Service in a hall in Darv;en, Lancashire ; but the audience was most notably unbalanced, not to say excitable. Mr. Bevan and his Ministry had a terrible time. Alderman Mrs. Katharine Fletcher, Chairman of the Lancashire Executive Council, was speaking (it seemed to me) with equal lucidity and sincerity in support of the Health Service ; but she was continually greeted with what Hansard would call " Opposi- tion Laughter." There was no doubt that, while the B.B.C. was being neutral, the audience was not ; and the programme, in general effect, was pretty strong propaganda for the Opposition.

This is pleasant or not, according to taste ; but it certainly does not square with neutrality. However; short of cross-examining the audience at the doors, and admitting declared members of the Primrose League and the Libour Party in equal proportion, how can the B.B.C. guard against a partiality among the public in an extempore programme ? The programme, I noticed, was intro- duced as " an edited recording." I should like to hear the passages that were edited out of it. I suspect they included fireworks.

Frou-frou and Opera Compliments to television, on something old and something new. Café Continental has for a long time enlivened the screen, and very rarely falls below its own standard of frou-frou. I think, by the way, I should just as much enjoy its cabaret turns without the presence of the supers who sit about vivaciously in evening dress ; there is something risible about people being gay boulevardiers to order. For the new, there was Mr. Eric Fawcett's production (in modern dress) of Pagliacci, which was resoundingly alive, full of invention and immensely flexible in camera work. Opera is also, by the way, getting a witty dusting off on Sunday mornings in the Home Service by Mr. Philip Hope-Wallace, in a series of gramophone snippets. Under such comprehensive headings as Love Behind Bars Of Life with Father or Strange Behaviour in Church, Mr. Hope- Wallace is collating the favourite themes of operatic heroes and heroines, and ransacking the operas with an affectionate and erudite mockery.

Drama Yet another Priestley play, Home is ToPnorrow, in Saturday Night Theatre. With the greatest respect both for Mr. J. B. Priestley and the Drama Department of the B.B.C., might I suggest that they are jointly getting to look like Darby and Joan—a pleasant relationship, but one that tends to a certain ennui in the onlooker ?