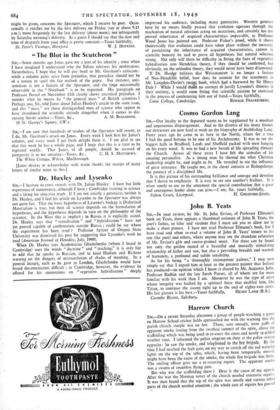 SIR,—I hesitate to cross swords with Dr. Julian Huxley. I have but little experience of controversy, although I have c Cambridge training in science and a liking for objective truth. If I am not strictly a geneticist, neither is Dr. Huxley, and I feel his article on Lysenko in the Spectator was always not quite fair. That the basic hypothesis of Lysenko's biology is Dialectical Materialism is true, but then all science depends on the formulation of hypotheses, and the hypothesis depends in turn on the philosophy of the scientist. In the West this is implicit ; in Russia it is explicitly stated. Dr. Huxley says that " vernalisation " and " hybridisation " have not yet proved capable of confirmation outside Russia ; could he say where the experiment has been tried ? Professor Spitzer of Oregon State University was dismisscd his post for suggesting that Lysenko's work be read (American Purnal of Heredity, July, 1949).

When Dr. Huxley says Academician Glushchenko (whom I heard in Cambridge) uses the words " doctrine " and " teaching," it is only fair to add that he speaks in Russian, and to heed Hudson and Richens warning on the dangers of mistranslation of shades of meaning. In a general lecture, such as he gave in London, Glushchenko would have found documentation difficult ; in Cambridge, however, the evidence he offered for his contentions on " vegetative hybridisation " deeply . impressed his audience, including many geneticists. Western genetics have by no means finally proved that evolution operates through the mechanism of natural selection acting on mutations, and certainly has not proved inheritance of acquired characteristics impossible, as Professor Wood Jones has pointed out. Professor Fisher's proof, while it shows theoretically that evolution could have taken place without the necessity of postulating the inheritance of acquired characteristics, cannot in scientific honesty be said to prove all hypotheses but natural selection wrong. Not only will there be difficulty in fitting the facts of vegetative hybridisation into Mendelian theory, if they should be confirmed, but obviously, on the orthodox theory, they would never have been discovered.

If Dr. Hindpy believes that Weissmanism is no longer a feature of Neo-Mendellst belief, how does he account for the statements in Mr. Langdon-Davies's receas book, which had a foreword by Sir Henry Dale ? While I would Make no attempt tS justify Lysenko's theories in their entirety, it would seem fitting that scientific caution be exercised in the process of condemning him out of hand.—Yours faithfully,