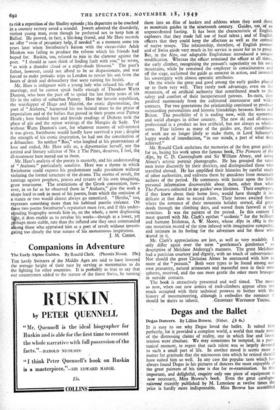 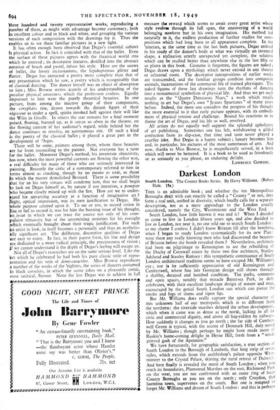 Degas and the Ballet

Ir is easy to see why Degas loved the ballet. It suited hint perfectly, for it provided a complete world, a world that made none of the distressing claims of reality, one in which line and linear tension were absolute. We may sometimes be tempted, in a puri- tanical moment, to regret that such talent was so largely devoted to such a small part of life. In another mood it- seems more a matter for gratitude that the microcosm into which he retired should have suited him so well. In any case the popular taste which ha, always found Degas in his pictures of dancers the most enjoyable ot the great painters of his time is due for re-examination. In this important, and delightful, enquiry only one piece of equipment is now necessary, Miss Browse's book. Even the great catalogue raisonni recently published by M. Lemoisne at twelve times the price is hardly more indispensable. Miss Browse has assembled

three hundred and twenty representative works, reproducing a number of them, as might with advantage become customary, both in excellent colour and in black and white, and grouping the various versions of each composition with the drawings for it. Thus she enables us to see these familiar pictures in a new light.

It has often enough been observed that Degas's essential subject Is physical action. In fact it coincided with that of the ballet. Even the surface of these pictures agrees with the theatrical world into which he entered ; its decorative features, distilled into the abstract notation of brush and pastel, infuse his style. Here are the snows of ballet, the frosty incrustations, the lepidopterous glitter and flutter. Degas has extracted a poetry more complete than that of any presentation which he saw, a poetry which is recognisably that of classical dancing. The dancer herself was an object of absorption to him ; Miss Browse writes acutely of his understanding of the peculiar physical awareness which the profession confers. Equally important to him were the purely theatrical beauties. In one picture, from among the inactive group of their companions, the coryphe es rise, drawn towards the distant figure of their rigisseur as under a spell, spirits invoked half against their will like the Wilis in Giselle. In others the star remains for a final moment poised, floating, buoyed up, as it seems so often in the theatre, on the flowing current of her audience's regard, while behind her the dance continues to revolve, an autonomous rite. Of such a kind is the poetry of the classical ballet ; it played a great part in the development of Oegas.

There will be some, painters among them, whom these beauties are far from reconciling to the painter. Not everyone has a taste for the ballet. Moreover Degas's method, his inveterate objectivity, has now, when the most powerful currents are flowing the other way, a real difficulty for many of those who arc seriously interested in painting. Recently the critic of a contemporary referred to him in terms almost as crushing, though by no means as neat, as those 11,7

n which the master demolished Besnard. There is some possibility t for us his very virtues will condemn him, that we shall begin

o look on Degas himself as, by nature if not intention, a pompier ho became closely mixed up with the fire. How are we to under- tand his unvarying accuracy as a function of imaginative art ? ight, optical impression, was its own justification to Degas. His hole purpose centred upon it. To sec or not, to record vision in hie or fail to record it, was for him the burning issue of his thought, n ,issue in which we can trace the source not only of his corn- lioulsive virtuosity but of the unremitting anxieties for his eyesight ich eventually brought about their tragic justification. For such tt artist to look, in itself becomes a personally and thus an aesthetic- ally significant act. The deliberate, decorative qualities of Degas are easy to enjoy. In fact, in their purest form, his line and design are dedicated to a more radical principle, the preciousness of vision ; if we cannot understand it the depth of Degas's feeling will escape us. Not all of Degas's researches are on the same serious level. Like the tart which he celebrated he had both his pure classic style of repre- sentation and his vein of demi-caractere. Miss Browse reproduces a number of the works of the 'eighties, the series of dancers costumed in black corselets, in which the scene takes on a pleasantly comic, even satirical, flavour. None the less Degas was to achieve in full rrre-rvr re. r• /V' etre'rrrrrrrrrrrrrrrrrreso measure the reward which seems to await every great artist whose style evolves through its full span, the uncovering of a world belonging nowhere but in his own imagination. His method led naturally to it, the endless production of further studies for com- positions which had long been to all appearance complete. In the 'nineties, at the same time as the last bath pictures, Degas arrived in his study of the dancer's body at what was virtually an invented shape, a stylisation utterly unexpected yet complete, the solution which can be studied better than anywhere else in the last fifty or so plates in this book. Costume is forgotten, the figures are naked ; Degas draws upon a mythology which never existed in any theatre or rehearsal room. The decorative juxtapositions of earlier works are transcended, and the familiar groups combine into composite animals, incarnations of the communal life of trained physiques. The naked figures of these last drawings turn the rhythms of dancing into a monumental symbolism of physical life. And thus we get such results as the " Quatre Danseuses Nucs," a work which recalls nothing in art but Degas's own " Jeunes Spartiatcs " of many years before. Indeed, the more one considers the progress of his thought the more essential to it that early picture appears, with its embodi- ment of physical tension and challenge. Round his reactions to its theme the art of Degas, and his life as well, revolved.

All artists do not equally well support the splendid upholstery of art publishing. Sometimes one has felt, withdrawing a gilded confection from its slip-case, that time and taste never played a crueller joke. But Degas is a happy subject ; luxury becomes him and, in particular, his pictures of the most sumptuous of arts. And now, thanks to Miss Browse, he is magnificently served, in a book which will never be bettered. It is a book to be used as frivolously or as seriously as you please, an enduring delight.