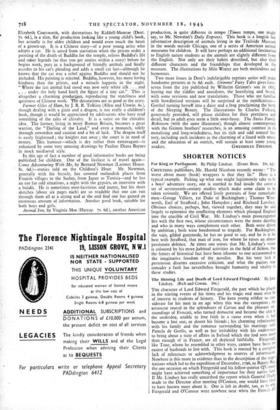 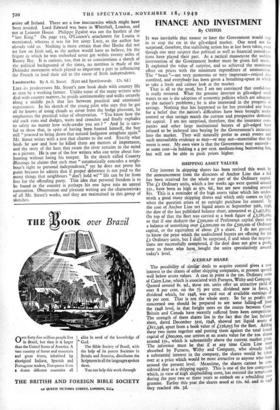 CRITICISING publishers, Mr. Harold Nicolson recently wrote: "The worst about many (book) wrappers is that they lie." Here is a typical example. Picking up what one might legitimately take to be a boys' adventure story, one is startled to find inside the cover a set of seventeenth-century studies which make some claim to be taken seriously. We are offered lively portraits of four remarkable men—George Villiers, zst Duke of Buckingham ; Thomas Went- worth, Earl of Strafford ; John Hampden ; and Ritchard Lovelace. Obvious choices, perhaps, but, viewed together, they may be said largely to epitomise the conflicting elements which plunged England into the crucible of Civil War. Mr. Lindsay's main preoccupation lies with the first two, whose circumstances were the more dazzling and who in many ways complement each other. Both were driven by ambition ; both were foredoomed to tragedy. For Buckingham, the vain, gilded ganymede, he has no good to say, and he is at his best with Strafford, that man of iron, for whom he raises an almost passionate defence. At times one senses that Mr. Lindsay's vision is coloured by his more _habitual activities in the field of fiction, that the fetters of historical fact have been irksome to one accustomed to the imaginative freedom of the novelist. But his very lack of pretension disarms excessive criticism, and what the purists may consider a fault has nevertheless brought humanity and vitality to

these studies. • The Shining Life and Death of Lord Edward Fitzgerald. By John Lindsey. (Rich and Cowan. 16s.)

THE character of Lord Edward Fitzgerald, the part which he playni in the stirring events of his times and his tragic end must ever fx of interest to students of history. The keen young soldier so con- siderate for his men in an age when this was the exception; the aristocrat reared in the splendours of Carton and the pleasant sur- roundings of Frescati, who turned democrat and became the idol of the underdog, unable to lose faith in a cause even when it had become a lost one, or desert his friends ; his charming relationship with his family and the romance surrounding his marriage with Pamela de Geniis, as well as her irritability with his endeavour; to bring about a state of affairs in Ireland which she had seen more than enough of in France, are all depicted faithfully. Fitzgerald, like Tone, whom he resembled in other Ways, cannot have been the easiest of husbands to live with. This book is marred by a complete lack of references or acknowledgment to sources of information. Nowhere is this more in evidence than in the description of the nega- fiations which led to the expedition-of December, 1796, to Bantry BO, the one occasion on which Fitzgerald and his fellow-patriot 0:Coruloc might have achieved something of importance for their native law' If Mr. Lindsey has really unearthed the report which General Hoch: made to the Director after meeting O'Connor, one would have liked to have known more about it. One is left in doubt, too, as to °F. Fitzgerald and O'Connor were nowhere near when the French do

arrive off Ireland. There are a few inaccuracies which might have been avoided. Lord Edward was born in Whitehall, London, and not at Lcinster House. Philippe Egalite was not the brother of the " late King." On page I to, O'Connor's attachment for Louisa is mentioned, whereas it was for her sister Lucy, as the author has already told us. Nothing is more certain than that Hoche did not set foot on Irish soil, as the author would have us believe, for the frigate in which he was embarked never got within twenty miles of Bantry Bay. It is curious, too, that in so conscientious a sketch of the political background of the times, no mention is made of the Defender movement which played so important a part in influencing the French to lend their aid to the cause of Irish independence.

Landmarks. By A. G. Street. (Eyre and Spottiswoode. 12s. 6d.) LIKE its predecessors Mr. Street's new book deals with country life as seen by a working farmer. Unlike some of the many writers who deal with country matters, he avoids sentimentality and walks securely along a middle pall that lies between practical and emotional experiences. In his sketch of the young pilot who says that he got all he knows of using clouds as cover from the hedge pheasant, he emphasises the practical value of observation. " You know how the old cock runs and dodges, waits and crouches and finally explodes to safety no matter how wide-awake you are ? " And he is care- ful to show that, in spite of having been hunted himself, the boy still " yearned to bring down that natural hedgerow aeroplane again." Mr. Street writes with a zest that charms to the end. Exactly what birds he saw and how he killed them are matters of importance, and the story of the hare that swam the river remains in the mind as a picture. He is one of the.few writers who can write about fox- hunting without losing his temper. In the sketch called Country Blessings he claims that each man " automatically concedes a neigh- bour's right to personal independence," yet he does not prove his point because he admits that if proper deference is not paid to the many things that neighbours " don't hold svi'" life can be far from free for the offending party. This idea that personal freedom is to be found in the country is perhaps his one lapse into an unreal convention. Observation and pleasant writing are the characteristics of all Mr. Street's works, and they are maintained in this group of sketches.