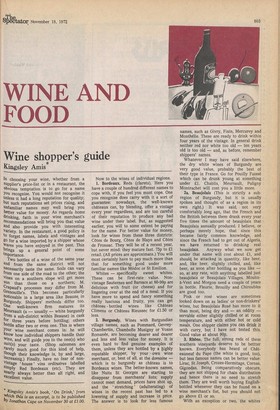 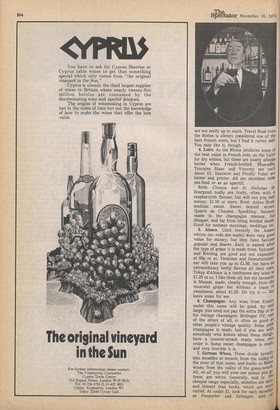 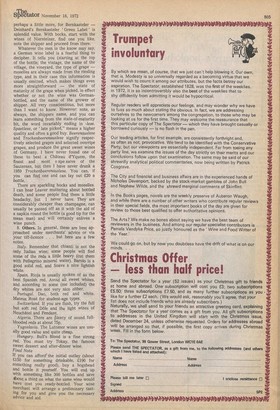 Kingsley Amis* In choosing your wine, whether from a supplier's price-list or in a restaurant, the Obvious temptation is to go for a name You recognise. You would not recognise it unless it had a long reputation for quality; but such reputations set prices rising, and unfamiliar names may well bring you better value for money. As regards home drinking, faith in your wine merchant's recommendations will bring you that value and also provide you with •interesting variety. In the restaurant, a good policy is to forget names, labels and vintages and go for a wine imported by a shipper whose Wares you have enjoyed in the past. This brings up a general point of some iniportance.

Two bottles of a wine of the same year and from the same district will not necessarily taste the same. Soils can vary from one side of the road to the other; the vines on a southern slope will get more sun than .those on a northern; M. Crapaud's processes may differ from M. Grenouille's. This becomes particularly noticeable in a large area like Beaune, in Burgundy. Shippers' methods differ too. One well-known firm matures its Meursault (a — usually — white burgundy from a sub-district within Beaune) in cask fur three years before bottling; others bottle after two or even one. This is where Your wine merchant comes in: he will know how individual shippers handle their Wine, and will guide you to the one(s) who suit(s) your taste. (Shop salesmen are rarely much good for this kind of help, though their knowledge is, by and large, increasing.) Finally, have no fear of nonvintage ' house ' vins ordinaires labelled simply Red Bordeaux (etc). They are nearly always better than all right, and excellent value. Now to the wines of individual regions.

1. Bordeaux. Reds (clarets). Here you have a couple of hundred different names to cope with, if you feel you must cope. One you recognise does carry with it a sort of guarantee: nowadays, the well-known châteaux can, by blending, offer a vintage every year regardless, and are too careful of their reputation to produce any bad wine under their label. But, as suggested earlier, you will to some extent be paying for the name. For better value for money, look for wines from these three districts: COtes de Bourg, C6tes de Blaye and C6tes de Fronsac. They will be of a recent year, but never mind: they mature fast. 75p to El retail. (All prices are approximate.) You will most certainly have to pay much more than that for something good under more familiar names like Medoc or St Emilion.

Whites — specifically sweet whites. These can be first-rate value. Nonvintage Sauternes and Barsacs at 80-90p are delicious with fruit (or cheese) and for lingering over at the end of a meal. If you have more to spend and fancy something really luscious and fruity, you can get château bottled wines like Château Climens or Château Rieussec for £1.50 or less.

2. Burgundy. Wines with Burgundian village names, such as Pommard, GevreyChambertin, Chambolle Musigny or Vosne Romanee, are becoming dearer and dearer and less and less value for money. It is even hard to find genuine examples of them, unless they are bottled by a highly reputable shipper, by your ',own wine merchant, or, best of all, at the domaine — which is to burgundy as chateau is to Bordeaux wines. The better-known names, like Nuits St Georges are starting to disappear from merchants' lists; supply cannot meet demand, prices have shot up, and the ' stretching ' (adulterating) of wines in the recent past has led to a lowering of supply and increase in price. The answer is to look for less famous names, such as Givry, Fixin, Mercurey and Monthelie. These are ready to drink within four years of the vintage. In general drink , neither red nor white too old — ten years old is too old — and, as before, remember shippers' names.

Whatever I may have said elsewhere, the dry white wines of Burgundy are very good value, probably the best of their type in France. Go for Pouilly Fuisse which can be drunk young at something under El. Chablis, Meursault, Puligny Montrachet will cost you a little more.

2a. Beaujolais (This is strictly a subregion of Burgundy, but it is usually spoken and thought of as a region in its own right.) It was said, not very comfortably long ago, that the French and the British between them drank every year five times the amount of beaujolais that Beaujolais annually produced. I believe, or perhaps merely hope, that since this became fairly common knowledge, and since the French had to get out of Algeria, we have returned to drinking real beaujolais. Anyway what we now get under that name will cost about El, and should be attacked in quantity, like beer, and, like beer, slightly chilled, and, like beer, as soon after bottling as you like — so, at any rate, with anything labelled just beaujolais or Beaujolais Villages. Moulin a-Vent and Morgon need a couple of years in bottle. Fleurie, Brouilly and Chiroubles are good too.

Pink or rosé wines are sometimes looked down on as ladies' or non-drinkers' wines, but Beaujolais Rosé has more to it than most, being dry and — an oddity — servable either slightly chilled or at room temperature, and with either hot or cold meals. One shipper claims you can drink it with curry, but I have not tested this. Good value at about 90p.

3. RhOne. The full, strong reds of these southern vineyards deserve to be bettter known. Everybody has heard of Chtlt eauneuf du Pape (the white is good, too), but less famous names can be better value: Lirac, St Joseph, Crozes-Hermitage, Comas, Gigondas, Being comparatively obscure, they are not shipped for chain distribution and hence there is no need to stretch them. They are well worth buying Englishbottled whenever they can be found on a wine merchant's list, but you should not go above El or so.

With an exception or two, the whites are not really up to much. Travel Rose from the Rhone is always considered one of the best French roses, but I find it rather dull. You may like it, though. 4. Loire. As the Rhone produces some of the best value in French reds, so the Loire for dry whites, but these are nearly alwaYS better when French-bottled. Muscadet, Touraine Blanc and Vouvray are each about El. Sancerre and Pouilly Fume are better and pricier. All are excellent with sea-food or as an aperitif. Reds: Chonon and St Nicholas de Bourgeuil really are fruity, often with a raspberryish flavour, but will run you jute money: £1.50 or more. Rose: Anjou Rose, medium sweet. Sweet dessert wines: Quarts de Chaume. Sparkling: Saumur, made in the champagne manner, but cheaper, and far from 'being bottled death. Good for summer mornings, weddings etc.

5. Alsace. Until recently the Alsace whites (no reds are made) were very good value for money, but they have become popular and dearer. Each is named after the type of grape it is made from. Sylvanet and' Riesling are good and not expensive at 90p or so. Tarminer and Gewurtztrami" ner will take you up to £1.50, but have an extraordinary herby flavour all their °Wu. Tokay d'Alsace is a toothsome dry wine at £1.25 or so. I like them all, but my favourite is Muscat, made, clearly enough, from the muscatel grape but without a trace ef sweetness; about £1.25. Do try it — leave some for me.

6. Champagne. Any wine from Franc,,e under this name will be good. By aa“ large, you need not pay the extra 50p or se for vintage champagne. Bollinger NV, one of the driest of all, is often as good as other people's vintage quality. Some Pitt champagne is made, but if you are with somebody who knows about these things,: have a counter-attack ready when YOU order it. Some sweet champagne is made' and very horrible it is. 7. German Wines. These divide broadlYi into moselles or mosels, from the valley ° the river of that name, and hocks or Rhine wines, from the valley of the guess-whiePo' All, or all you will ever see unless you there, are white. Generally, and cheaper range especially, moselles are drieie and thinner than hocks, which are mor, varied. At under El, look for such moselie't as Piesporter and Zeltinger, and, 9

perhaps a little more, for Bernkasteler — Deinhard's Bernkasteler ' Green Label' is splendid value. With hocks, start with the wines of Niersteiner, find one you like, note the shipper and proceed from there.

Whatever the men in the know may say, a German wine label is a fearful thing to decipher. It tells you (starting at the top of the bottle; the vintage, the name of the village, the vineyard, the type of grape — moselles are always made from the riesling type, and in their case this information is usually omitted, which makes things even more straightforward — the state of maturity of the grape when picked, in effect whether or not the wine was Germanbottled, and the name of the grower of shipper. All very conscientious, but more than I want to know. However: note, as always, the shippers name, and you can learn something from the state-of-maturity bit, the word invariably ending in -lese. Spaetlese, or 'late picked," means a higher quality and often a good buy. Beerenauslese and Trochenbeerenauslese signify respectively selected grapes and selected overripe grapes, and produce the great sweet wines of Germany. I have never found one of these to beat a Chateau d'Yquem, the finest and most e xpe nsive of the Sauternes, but then I have never drunk a 1959 Trockenbeerenauslese. You can, if you can find one and can lay out £20 a bottle.

There are sparkling hocks and moselles. I can hear Leaver muttering about bottled death, and some people find them a little headachy, but I never have. They are considerably cheaper than champagne, can usually be passed off as it with the aid of a napkin round the bottle (a good tip for the mean man) and will certainly enliven a wine punch.

8. Others. In general, these are best approached under merchants' advice or via your off-licence . . . but here are a few notes.

Italy. Remember that chianti is not the Only Italian wine; some people will find some of the reds a little heavy (cut them with Pellegrino mineral water). Barolo is a good solid red, and Soave a nice lightish white.

Spain. Rioja is usually spoken of as the best Spanish red. Avoid all sweet whites, and according to some (me included) the dry whites are not very nice either.

Switzerland. If you are flush, try the full but soft red DOle and the light wines of Neuchatel and Fendant.

Algeria. There are blenty of sound fullblooded reds at about 75p.

Yugoslavia. The Lutomer wines are usually good value and quite cheap.

Hungary. Bull's Blood is a fine strong red. You must try Tokay, the famous sweet dessert and after-dinner wine.

If you can afford' the initial outlay (about £150 for something drinkable, £190 for something really good), buy a hogshead and bottle it yourself. You will end up With something like 300 bottles and save albout a third on what the same wine would have cost you ready-bottled. Your wine merchant will arrange a preliminary tasting for you and give you the necessary advice and aid.