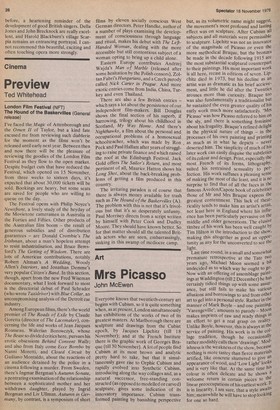 I've faced the Magic of Attenborough and the Omen II of Taylor, but a kind fate excused me from reviewing such diablerie for the moment as the films won't be released until early next year. Between then and now there will be the pleasure of reviewing the goodies of the London Film Festival as they flow to the open market. Despite budget cuts that have reduced the Festival, which opened on 15 November, from three weeks to sixteen days, it's expected that about 30,000 tickets will be sold. Bookings are heavy, but some seats are saved for people who are willing to queue on the day.

The Festival opens with Philip Noyce's Newsfront, a lively study of the heyday of the Movietone cameramen in Australia in the Forties and Fifties. Other products of the Australian film boom — the result of generous subsidies and of distribution guarantees — are Donald Crombie's The Irishman, about a man's hopeless attempt to resist industrialisation, and Bruce Beresford's The Getting of Wisdom. There are lots of American contributions, notably Robert Altman's A Wedding, Woody Allen's Interiors, and Jonathan Demme's very popular Citizen's Band. In this section, though, apart from the new Fred Wiseman documentary, what I look forward to most is the directorial debut of Paul Schrader (who wrote Taxidriver) with Blue Collar, an uncompromising analysis of the Detroit car industry.

Among European films, there's the world premier of The Roads of Exile by Claude Goretta (director of The Lacemaker), concerning the life and works of Jean Jacques Rousseau. Walerian Borowczyk, whose The Beast so divided critics here, pursues his erotic obsessions Behind Convent Walls; and also from Italy come Ecce Bombo by Nanni Moretti, and Closed Circuit by Guiliano Montaldo, about the reactions of an audience detained by the police in a cinema following a murder. From Sweden, there's Ingmar Bergman's Autumn Sonata, a pentrating examination of the relationship between a sophisticated mother and her withdrawn daughter, played by Ingrid Bergman and Liv Ullman. Autumn in Germany, by contrast, is a symposium of short films by eleven socially conscious West German directors. Peter Handke, author of a number of plays examining the development of consciousness through language and ritual, makes his debut with The LeftHanded Woman, dealing with the more accessible but still contentious subject of a woman opting to bring up a child alone.

Eastern Europe contributes Andrzej Wajda's Man of Marble (released after some hesitation by the Polish censors), Zoltan Fabri's Hungarians, and a Czech parody called Nkk Carter in Prague. And more exotic entries come from India, China, Turkey and even Thailand. There are also a few British entries — which says a lot about the persistence of our independent film-makers. Bill Douglas shows the final section of his superb, if harrowing, trilogy about his childhood in Scotland, My Way Home. And there's Nighthawlcs, a film about the personal and occupational problems of a homosexual schoolteacher, which was made by Ron , Peck and Paul Hallam after years of struggling to raise private finance and which raised the roof at the Edinburgh Festival. Jack Gold offers The Sailor's Return, and most pertinent of all, Maurice Hatton shows his Long Shot, about the back-breaking problems of getting a film produced in this country.

The irritating paradox is of course that there is always money available for trash such as The Hound of the Baskervilles (A). The problem with this is not that it's frivolous but that it's so desperately unfunny. Paul Morrisey directs from a script written by himself with Peter Cook and Dudley Moore. They should have known better. So for that matter should all the talented British actors who are seen, embarrassingly, sinking in this swamp of mediocre camp.