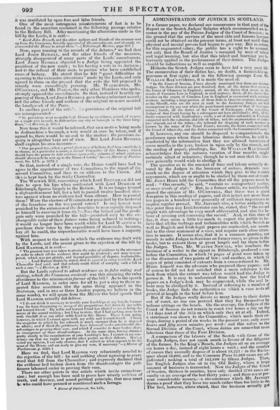 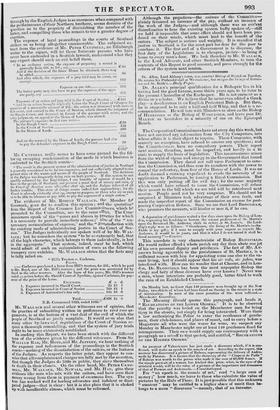 ADMINISTRATION OF JUSTICE IN SCOTLAND.

IN a former paper, we declared our concurrence in that part of the Report on the Scotch Judges' Salaries which recommended an in- crease in the pay of the Puisne Judges of the Court of Session; on the ground that the services of the most able and famous lawyert could not be obtained on the present terms, at least not until their physical and mental powers had begun to give way. But in retuni for this augmented salary, the public has a right to be assured, not only that the Bench of Justice s occupied by men of talent and legal learning, but also that this talent and learning are la- boriously applied to the performance of their duties. The Judges should be industrious as well as capable. Hitherto the Scotch Judges seem to have led a very easy life. The enumeration of their duties has, no doubt, a formidab!e ap. pearance at first sight ; and in the following passage Loin Sit WILLIAM RAE'S evidence, it is made the most of.

If, however, any one should be disposed to compassionate the gentlemen upon whom these laborious duties devolve, he will be comforted by the information that they are allowed vacations of seven months in the year, broken in upon only by the circuit, and the reading of papers, pleadings, &c. Sir WILLIAM RAE himself acknowledges that the autumn vacation of four months might certainly admit of reduction; though he is not sure that the law- yers generally would wish to abridge it.

The question as to the amount of time and labour actually de- voted by the Judges to the business of suitors, depends very much on the degree of attention which they give to the written arguments, which are or ought to be studied by them out of court. Mr. JOHN HOPE told the Committee that all the papers must be read : " Our records," he said, " contain no unimportant matter, or mere words of style." But, in a former article, we incidentally quoted the opinion of Mr. O'CONNELL, that there was a great deception in this reading of papers, and that in fact not more than ten pages in a hundred were generally of sufficient importance to require regular perusal. Mr. JEFFREY also, a better authority on this point than any Irish barrister can be, stated, that " the record might with advantage be very much abbreviated, and also the la- bour of revising and rerevising the record." And, at this time of day, it does seem a little too much to expect the public to be- lieve that all the verbiage and technicalities with which Scotch as well as English and Irish legal papers are overloaded, are essen- tial to the clear statement of a case, and require such close atten- tion to master. It seems also, that it is a common practice, not merely to refer Judges to decisions on former cases, as given in the books, but to extract them at great length and lay them before the Judges. Thus, Mr. WALTER NEWALL, who conducts the business of a writer to the signet in Edinburgh, produced a case before the Committee, in which 76 pages of print were taken up in the discussion of two points of law ; and another, in which 32 pages of print consisted of' extracts from a cause referred to. Mr. HOPE himself was the advocate who prepared these papers; and of course he did not feel satisfied that a mere reference to the book from which the extract was taken would lead the Judge to peruse it. It is easy to understand from this, bow the load of papers on a Judge's desk may be augmented, while the real la- bour may be abridged by it. Instead of referring to a number of books, the Judge finds the authorities on which a case rests all printed at length in the brief before him. But if the Judges really devote so many hours to their duties out of court, no one can pretend that they fag themselves by tedious sittings on the bench. On the average, the Judges of the Court of Session do not remain in court two hours a day on the 114 days (out of the 365) on which only they sit at all. Indeed, a statement was shown to the Committee, which made their sit- tings, during a period of six weeks in the present year, only seven hours and fifty-seven minutes per week: and this refers to the Second Division of the Court, whose duties are somewhat more

laborious than those of the First Division. •

A comparison of the labours of the Scotch with those of the English Judges, does not speak much in favour of the diligence of the former. In the King's Bench, the Judges sit on an average six hours a day, instead of eight hours a week ; and the number of causes they annually dispose of is about 56,221 : in the Exche- quer about 30,000, and in the Common Pleas 16,000 cases are ad- judicated; making a total of 102,000 by fifteen Judges. Then, the English Judges also sit in the Old Bailey, where a large amount of business is transacted. Now the Judges of the Court of Session, thirteen in number, have only decided 2700 cases an- nually on an avelage of the last thirty years; and there are at pre- sent considerable arrears,—a circumstance which Mr. JEFFREY deems a proof that they have too much rather than too little to do. The fact, however, above stated, that the business actually got through by the English Judges is so enormous when compared with the performances of their Northern brethren, seems decisive of the question as to the propriety of diminishing the number of the latter, and compelling those who remain to Use a greater degree et' exertion. The expense of legal proceedings in the courts of Scotland strikes us as being altogether unreasonable. The subjoined ex- tract from the evidence of Mr. PETER CAMPBELL, an Edinburgh writer to the signet, will let those fortunate persons who have never been embroiled in a Scottish lawsuit, understand what they may expect should such an evil befall them.

" In an ordinary action, the expense of preparing a record is generally from 60/. to 70/., say -e 65 And if the decision of the Inner house be obtained, there may be added 35 And after which, the expenses of a jury trial may be a'rout, on average 112 Expense on one side 212 The losing party may also have to pay the expenses of the oppm site party, say 212 Expenses of an action and jury trial in the Court of Session

" And in an action brought originally befote the Burgh Court of Glasgow for payment of a mercantile account of 281., the action was dismissed with costs in that court, and carried to the Court of Session, which altered the jodgment of the Burgh Court, and decerned in favour of the pursuer with costs; and the latter judgment, on appeal to the I louse of Lords, was altered. The pursuer's expenses in that case were—

In the house of Lords 200 342 And on the reversal by the House of Lords, the pursuer had also

to pay the defender's expenses in the Burgh Court 30

Mr. CAMPBELL really seems to have some ground for the fol- lowing sweeping condemnation of the mode in which business is

conducted in the Scottish courts-

" The result is, the present system of the administration of justice in Scotland is generally considered to be far too expensive, and not sufficiently adapted to the present state of the wants and means of the people of Scotland. The decisions of the Judges too frequently bring ruin on both parties. If this system be not speedily reformed by the Legislature, I am humbly of opinion It would be a boon to the people of Scotland, and prevent a great deal of misery and ruin, if the Coult of Session were a1to.7et1ter shut up, and the Judges relieved of all further trouble. This state of things seems indeed fast approaching; for the Court is already rirtually shut up, except to paupers, or those who are so rich as to be able to advance or pay 5001. to pay the expenses of a single action."

The evidence of MT. ROBERT WALLACE, the Member for Greenock, goes far to confirm this opinion ; and the quotations from the Report of the Common Law Commissioners, which he presented to the Committee, are to the same effect. The Com- missioners speak of the "errors and abuses in Practice for which it is necessary to provide immediate redress ;" also of the ‘ t n necessary accumulation of expense," and the "dissatisfaction with the existing mode of administering justice in the Court of Ses- sion." The Judges individually are spoken well of by Mr. WAL- LACE; but he considers the system "to be so extremely bad, that all the high character, which belongs to them individually, is lost in the aggregate." That system, indeed, must be bad, which would admit of such an accumulation of costs as the following trumpery case exhibits. Mr. WALLACE states that the facts may be fully relied on.

Mr. WALLACE and several other witnesses are of opinion, that the practice of submitting written in preference to viva voce ar- guments, is at the bottom of a vast deal of the evil of which the people of Scotland so justly complain. It would seem also that many other by-laws and regulations of the Court of Session re- quire a thorough remodelling, and that the system of jury trials ought to be more extensively established.

In reading this Report, we have been struck with the different tone of the evidence given by the different witnesses. From Sir WILLIAM RAE, Mr. IlopE,and Mr. JEFFREY, we hear nothing of the expense and tediousness of the proceedings in the Scottish courts—nothing of the dissatisfaction of the suitors, or the laziness of the Judges. As respects the latter point, they appear to eon- sider that all complaints and charges are fully met by the assertion, that though the Judges do little in public, they slave themselves to death in their closets. On the other band, Mr. PETER CAMP- BELL, Mr. WALLACE, Mr. NEWALL, and Mr. HAY, give their evidence like men who mix with the suitors, and have seen their money wrung from them in payment of enormous fees. The sys- tem has worked well for leading advocates and indolent or dissi- pated judges—that is clear : but it is also plain that it is choked up with insufferable abuses, which must be reformed. Although the prejudices—the animus of the Committte-- plainly favoured an increase of the pay, without an increase of the work of the Judges,—and although there was an evic'ent disinclination to hear the existing system badly spoken of—stilt we hold it impossible that some effect should not have been ',re- duced on their minds, which must lead to the benefit of the suitors. The subject is serious and weighty. It is manifest that justice in Scotland is for the most part too dear for the poor to purchase it. The first end of a Government is to dispense, the first duty of the Legislature is to cheapen, justice--to bring it home to every man's door. We look therefore to Mr. WALLACE, to the Lord Advocate, and other Scottish Members, to turn the contents of this Report to good account, and press strongly for the reform of the system next session.