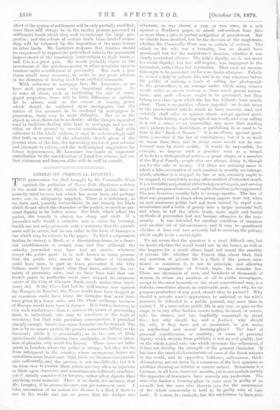 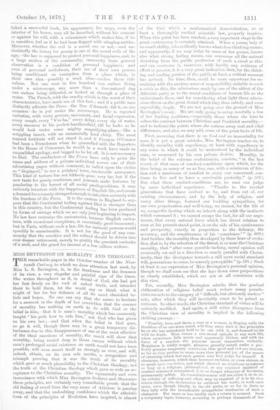 THE prosecution for libel brought by Mr. Cornwallis West against the publisher of Town Talk illustrates a defect in the usual law of libel, which Continental jurists have re- peatedly tried to cure, but which has never been, and perhaps never can be, adequately supplied. There is a deficiency, as we have said, possibly irremediable, in our remedy for libels which do not affect the character or the pocket, so much as per- sonal dignity in its better sense. For libels which affect the pocket, the remedy is almost too sharp and swift. If a journalist calls Smith a swindler, and so ruins his business, Smith can not only prosecute with a certainty that the punish- ment will be severe, but he can inflict in the form of damages a fine which may be ruinous to the paper. Tcslibel a corporation dealing in money, a Bank, or a discounting-house, or a finan- cial establishment is certain ruin, and this although the unlucky journalist may have had no motive whatever except the public good. It is well known to many persons that the public ruin caused by the failure of °rereads could have been, in part at least, prevented if the City Editors could have stated what they knew, without the cer- tainty of pecuniary ruin ; and we have been told that one Scotch paper in particular could have stopped the infamous career of the City of .Glasgow Bank, much earlier than insol- vency did. If the 1.1 ?nes had lost its well-known case against the Marquis de Bourbel, the Times would have been stopped, as no resources could have borne the damages that must have been given in a dozen suits, and the whole exchange business of Europe would have been in danger. It is better, however, to risk such misfortunes, than to entrust the power of preventing them to individuals who may be wreckers, or the tools of wreckers; but libel with pecuniary consequences, is punished sharply enough. Libels, too, upon character can be stopped. The law is by no means perfect, the penalty sometimes falling on the innocent; while it is occasionally, as in the cue of libels upon female chastity arising from malignity, or from an inten- tion of plunder, very much too lenient. Those elves are infre- quent in London, where the police is strong ; but they are far front infrequent in the country, where anonymous letters are sometimes sown broad-cast. Still, libels on character are punishaide eufficiently, and the process is not too difficult; but it

far from easy to punish libels which are very often as injurious M libels upon character, and sometimes are deliberate cruelties ; yet if strictly considered by lawyers, rather affect dignity than anything more material. There is no doubt, for instance, that Mr. Langtry, if he proves his case, can get redress at once. A false accusation of an action for divorce is a libel, if there is one in the world, and one so grave that the Judges are

reluctant, as was shown a year or two since, in a suit against a Northern paper, to admit self-evident bona fides as more than a plea in partial mitigation of punishment But we should have doubted, but for the decision of the magistrate, whether Mr. Cornwallis West was so certain of redress. The attack on his wife was a brutality, but we should have questioned but for the magistrate's decision, whether it was clearly a criminal offence. The lady's dignity, we do not mean her social dignity, but her self-respect, was impugned in the accusation, rather than her reputation. That such an accusa- tion ought to be punished, we have no doubt whatever. Falsely to accuse a lady in private life, and in no way whatever before the public, of making a trade of selling her photograph to the printsellers, is an outrage under which many women would suffer as severe torture as from much graver accusa- tions; and such offences ought to be prevented, but they belong to a class upon which the law has hitherto been nearly silent. There is no positive offence imputed—we do not mean in the incriminated, article, which we have scarcely read, and certainly shall offer no opinion about—except against good- taste. Distributing a photograph of one's-self, and even selling it, is not a crime or an immorality, any more than sending one's picture to the Exhibition, or publishing it, as used to be done in the "Book of Beauty." it is an offence against good- taste, a sacrifice of the law of retiringuess ; but it is in itself no worse than that, and in many cases would not be con- demned even by strict society. it would be impossible, for example, to impute such a practice even as a breach of taste to a distinguished actress, a great singer, or a member of the Royal Family, people who are always doing it, though not for the sake of money. Yet there are certainly eases in which a false accusation of such conduct is morally an outrage, which, whether it is stopped by law or not, certainly ought to be stopped, as completely as any other method of intended insult. It is a brutality perpetrated either to injure or for gain, and serving no public purpose whatever, and ought, therefore, to be suppressed. The law, however, usually fails to avenge insults. The law of libel was prepared in times when penny papers were not, when an over-numerous public had not been turned by rapid com- munication and a habit of gossip into a larger servants' hall, and when, to tell the whole truth, more rapid and brutal methods of prevention had not become offensive to the coin- muuity. It was intended for another condition of manners and another set of circumstances, and it may be questioned whether it does not now seriously fail in securing the privacy which ought to be a social right.

We are aware that the question is a most difficult one, but we doubt whether the world would not be the better, as well as the happier, for a much doses legal veil round the sanctity of private life ; whether the French idea about libel, that any mention of private life is a libel, if the person men- tioned so considers it, is not in principle, and allowing for the exaggeration of French logic, the Bounder law. There are thousands of men, and hundreds of thousands of women, to whom any mention at all in public newspapers, except in the most honorific or the most conventional way, is a definite, sometimes almost an intolerable, pain; and why, for no purpose productive of any good, should they be pained ? Why should •a private man's appearance be satirised or his wife's manners be ridiculed in a public journal, any more than in society P If a man enters public life in any way, or goes on the stage, or in any other fashion courts notice, he must, of course, take his chance, and has implicitly consented to stand fire ; but why should he, and a fortiori, why should his wife, if they have not so consented, be put under an intellectual and moral burning-glass ? The kind of personal sensitiveness, or modesty, or sense of personal dignity which shrinks from publicity is not an evil quality, but on the whole a good one; one which increases 'the refinement, if it does not develop the strength of the general character. It has been the marked characteristic of some of the finest natures in the world, and its opposites, boldness, callousness, thick- skinnedneas, are set down by a consensus of the best opinions as qualities showing an inferior or coarser nature. Brassiness is a baseness, in all keen observers' mouths, yet in our modern society the opposites of brassiness have scarcely any protection. The man who flashes a burning-glass in your eyes is guilty of an assault, but the man who dissects you for the amusement of the whole community is held to be guilty only of bad- taste. If a man, for example, has the misfortune to have pub- lished a, successful book, his a.ppearance, his ways, even the interior of his house, may all be described, without his consent or against his will, with a minuteness which makes him, if he is sensitive, feel as if he had been flogged with stinging-nettles. Moreover, whether the evil is a moral one or not,—aud un- doubtedly tho frenzy for gossip is one of the moral evils of the age,—the law is supposed to protect personal happiness, and, to a large section of the community, immunity from general observation is a condition of personal happiness, and even of personal usefulness, their use of their own powers being conditional on exemption from a glare which, in their own idea—possibly a weak idea—makes them ridi- culous. Not one man in five hundred can endure living any more than a fine-natured dog

under a microscope, can endure being ridiculed, or looked at through a glass of water. The French, with the cruelty which is the worst of their characteristics, have made use of this fact ; and if a public man distinctly affronts the Press—the Due d'Aumule did it, on one occasion—he is put under the microscope. He is reported verbatim, with every gesture, movement, and facial expression, every delay, every sip of water, every cough, every " h'm-ha,"

every recourse to his pocket-handkerchief, till he looks as he would look under some mighty magnifying-glass,—like a wriggling insect, with an unnaturally loud chirp. The most trained fortitude will not stand it, and if Feargus O'Connor had been a Frenchman when he quarrelled with the Reporters in the House of Commons, he would in a week have made an unqualified apology, and begged to be let off. It is not necessary to libel. The conductors of the Times have only to print the name and address of a private individual across one of their advertising pages without comment, to inflict upon the victim so "displayed," to use a printers term, intolerable annoyance. This kind of torture has not hitherto gone very far, bat if the new taste for gossip continues, and journals make fortunes by pandering to the lowest of all social predispositions, it may seriously interfere with the happiness of English life, and create a demand for a remedy stringent enough to interfere seriously with the freedom of the Press. It is the custom in England to sup- pose that the Continental feeling against libel is stronger than in this country, but the Continental feeling has been produced by forms of outrage which we are only just beginning to import. No law here restrains the caricaturist, because English carica- ture, with occasional exceptions, is essentially good-humoured ; but in Paris, without such a law, life for eminent persons would speedily be unendurable. It is not for the good of any com- munity that the sensitive and the refined should be driven into ever deeper retirement, merely to gratify the prurient curiosity of a mob, and the greed for income of a few callous writers.