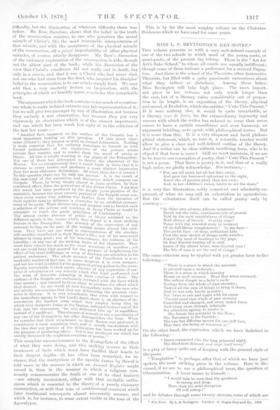 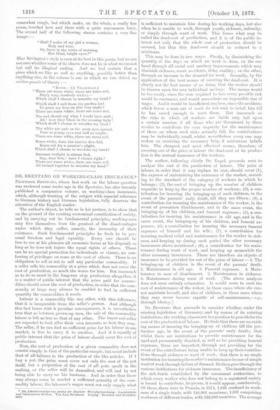 This volume presents us with a very well-defined example of one of the two schools to which most of the young poets, or quasi-poets, of the present day belong. There is the "Art for Art's Sake School," to whom all creeds are equally indifferent; though some of them indicate a preference for a revived Pagan- ism. And there is the school of the Theorists, often destructive Theorists, but filled with a quite passionate earnestness about

what they believe or disbelieve. Among :these latter, Miss Bevington will take high place. The most import- ant piece in her volume, not only much longer than the rest, but of a literary value considerably out of propor- tion to its length, is an exposition of the theory, physical and moral, of Evolution, which she entitles," Unto This Present."

If it were nothing else, it would be quite remarkable, as

a literary tour de force, for the extraordinary ingenuity and

success with which the writer has reduced to verse that never ceases to have a certain smoothness and even harmony, an argument bristling, so to speak, with philosophical terms. But it is more than this. It is a very eloquent and lucid philoso- phical statement, which, we take it, a scientific teacher would allow to give a clear and well-defined outline of the theory..

And if a writer can be clear without sacrificing form, who is t&

object if that form is verse P Still we must maintain, if we are to be true to our conception of poetry, that" Unto This Present 1'

is not a poem. That there is poetry in it, and that of a really high order, we gladly acknowledge. For instance,—

" For, not till earth hid all her fires away,

And gave but borrowed splendour to the night, Know she of greater glory than her own ; And, in her children's vision, learnt to see the stars,"

is a very fine illustration, nobly conceived and admirably ex- pressed, of what we may call an exhortation to agnosticism.

But the exhortation itself can be called poetry only by courtesy ;

"In thine own piteous, piteous ignorance

Break not the calm, continuous tale of growth Told by the tacit truthfulness of things With theory of breach. 0 petty man !

Pause with thy rounded story in mistrust

Of its full-bloom completeness ! In the face—

The awful face– of deep, unfinished Life Cast thy neat sketch of things aside awhile; Forget thy need of headings to thy page, Or final flourish hinting all is said.

The life of man is not the end of things."

The same criticism may be applied with yet greater force to the,

There is a sense in which the universe

Is pivoted upon a molecule; There is a sense in which eternity

Hangs on each moment. Read that souse reversed.

The softest dimple in a baby's smile Springs from the whole of past eternity ; Tasked all the sum of things to bring it there,

And so was only barely possible;

Yet 'twos so one and equal with its cause "Twould need that whole of past eternity Cancelled and changed, and every motor force And every atom through infinitude Set otherwise ageing, to hinder It. The future lies potential in the Now ;

The two but iff cesusardyisertihng n the PossibTime le ef for one stiff fact,

That fact, the being of whatever is."

On the other hand, the expression which we have italicised in the following,—

" Dawn conquered e'en the long primeval night, The blackness thinned, and wept itself away,"

"Temptation" perhaps, after that of which we have just poem.i

spoken, the most striking piece in the volume. Here is dis- cussed, if we are to use a philosophical term, the question of Obscurantism. A lover muses to himself,—

" I would fain be sure that thy goodness

Is strong and deep, Moro than the mild deception Of self asleep ;"

and he debates through some twenty stanzas, some of which are

somewhat rough, but which make, on the whole, a really fine poem, touched here and there with a quite uncommon force. The second half of the following stanza contains a very fine image

"Shall I make of my girl a woman, Hely and wise,

Or, leave in the mists of morning Her blind, bright eyes P''

Miss Revington's style is seen at its best in this poem, but we are notsure whether some of its charm does not lie in what we cannot bat call its illogical ending. And we feel certain that a piece which we like as well as anything, possibly better than

anything oleo, in the volume is one in which we can detect no .arriere-pensoe of theory :— "Ruses.—(A VILANELLE.)

The rod should say what I would have said ;

Ah ! how they blush in the evening light ! Which shall I choose to wreathe my head ?

The white are pale as the snow now-spread, Pure as young eyes and half as bright : There are roses white, thero are roses red.

Roses white, from the heaven dew-fed, Roses red for a passion's plight,

Which shall I choose to wreathe my head ?

Say, dear love ! have I chosen right ? There aro roses white, there are roses red, All twined together to wreathe my head."