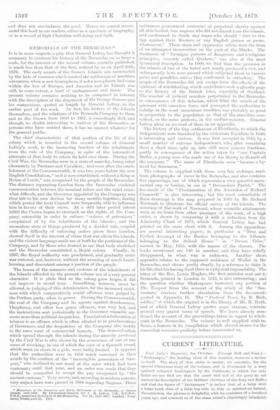 IT is in some respects a pity that General Lefroy has thought it necessary to continue his history of the Bermudas on so large a scale, for the interest of the second volume, recently published, is much less than that of the first, noticed by us on April 20th, 1878. The early annals of the Somers Islands are surrounded by the halo of romance which marked, the golden age of maritime adventure, when a new hemisphere, if not a new planet, had come within the ken of Europe, and America and its islands was still, to some extent, a laud of enchantment and faerie. The present volume contains nothing to be compared in interest with the description of the shipwreck of Sir George Somers and his companions, quoted at length by General Lefroy, in the

earlier part of the work. In fact, the history of the Islands themselves, and the relations of the Bermuda Company to them and to the Crown from 1650 to 1687, is exceedingly dull, and though, no doubt, interesting to natives of the Bermudas, or persons who have resided there, it has no interest whatever for the general public.

The chief characteristic of that portion of the life of the colony which is recorded in the second volume of General Lefroy's work, is the increasing freedom of the inhabitants from the rule of the Company, in spite of the intermitted attempts of that body to retain its hold over them. During the Civil War, the Bermudas were in a state of anarchy, being ruled alternately by Puritans and Cavaliers ; and even after the estab- lishment of the Commonwealth, it was two years before the new English Constitution," as it is now established, without a King or House of Lords," was recognised by the people of the Bermudas. The distance separating London from the Bermudas rendered communication between the nominal rulers and the ruled some- what difficult, and the Governor appointed by the Company was thus left to his own devices for many months together, during which period the local Council were frequently able to influence him in favour of their views. At a still later period (about 1680) the Crown began to encroach on the rights of the Com- pany, ostensibly in order to enforce "redress of grievances" complained of by the inhabitants of the islands ; and the anomalous state of things produced by a divided rule, coupled with the difficulty of enforcing orders given from Loudon, showed itself in the amount of crime that was rife in the islands, and the violent language made use of both by the Partisans of the Company, and by -those who desired to see that body abolished and the Bermudas constituted a Royal colony. Finally, in I687„ the Royal authority was proclaimed, and gradually order was restored, not, however, without the arousing of much heart- burning and discontent among a portion of the people.

The traces of the manners and, customs of the inhabitants of the Islands afforded by the present volume are of a very general character. It is plain that as the colony grew larger, it did not improve in moral tone. Something, however, must be allowed, in judging of this deterioration, for the increased strict- ness with which comparatively venial offences were judged by the Puritan party, when in power. During the Commonwealth, the zeal of the Company and its agents against drunkenness, blasphemy, and other less grave offences, was very hot, and ths instructions sent periodically to the Governor resemble ser- mons more than political despatches. Fraudulent adulteration of tobacco is an offence which is often alluded to in proclamations of Governors, and the despatches of the Company also testify to the same want of commercial honesty. The demoralisation which spread through the islands during the anarchy produced by the Civil War is also shown by the occurrence of one or two cases of wrecking, in one of which the crew of a Spanish vessel, which went on shore in a gale, were badly treated. lit appears that the authorities were in 1656 much exercised in their minds by the conduct of the "incorrigible generation of Saw- yers," who declined to saw wood at the rates which had been customary until that year, and an order was made that they should be compelled to accept the pay recognised by "the ancient custome." Very severe, and, according to modern notions, very unjust laws were passed in 1664 regarding Negroes. These Molooldolli of the ITheorery and Early Settlement of the Bermuda; or Somers Islands, 16114887. Bp Lieutenant-General Sir J. I. Leroy, 0,13., H.O.M X.4., ra.s., sometime Govertror or the Bermudas. Vol. II., 15.50-1057, London Lung- mans, Green, and Co. 1675.

ordinances pronounced sentences of perpetual slavery against all able-bodied, free negroes who did not depart from the islands, and, condemned to death any negro who should "dare to rise upp against their Masters, or any English person or pSODF. whatsoever." These stern and oppressive edicts were the fruit of an attempted insurrection on the part of the Blacks. The treatment of " forraigne persons of dangerous and irreligious principles, comonly called Quakers," was also of the most tyrannical description. In 1660, we find that the presence in the islands of two of the hated sect nearly produced a riot, and subsequently laws were passed which subjected them to various pains and penalties, unless they conformed to orthodoxy. The people of the Bermudas did not escape from the effects of the epidemic of witchfinding, which contributes such a ghastly page to the history of the British Isles, especially of Scotland.

The number of judicial murders perpetrated in the Bermudas in consequence of this delusion, which filled the minds of the ignorant with nameless fears, and prompted the authorities to indulge in the most monstrous cruelties, was probably as great in proportion to the population as that of the atrocities com- mated, on the same pretexts, in the mother-country. General Lefroy gives an account of them in an appendix.

The history of the tiny settlement of Eleutheria, to which the Independents were banished by the victorious Royalists in 1649„ is interesting and curious. It was first occupied in 1646, by a small number of extreme Independents, who, after remaining there a short time, split up into still more minute fractions,.

partly in consequence of the action taken by "one Captain Butler, a young man who made use of his liberty to disturb all the company." The name of Eleutheria soon "became a by- word for dissension."

The volume is supplied with three very fair etchings, made from photographs of views in the Bermudas, and also contains five engravings, one of which represents a very graceful sacra-

mental cup or beaker, in use in " Devonshire Parish." The fac-simile of the "Proclamation of the Accession of Richard

Cromwell" is also interesting ; but the most remarkable of

these drawings is the map prepared in 1663 by MT. Richard Norwood, to illustrate his official survey of the islands. The

accuracy of the work of Norwood, whose scientific attaiuments were, as we learn from other passages of the work, of a high order, is shown by comparing it with a reduction from the Admiralty Chart of 1871, which General Lefroy has had

printed on the .same sheet with it. Among the appendices are several interesting papers, in particular a "True and

Perfect Accompt of the Bookes belonging to the Librarie belonging to the School House " in "Devon Tribe," correct to May, 1655, with the names of the donors. The books mentioned are 140 in number, and they have totally disappeared, in what way is unknown. Another short appendix relates to the supposed residence of Waller in the Bermudas, and show a pretty clearly, by a reference to dates in his life, that his having lived there is a phy &Ace]. impossibility. The letter of the Rev. Lewis Hughes, the first minister sent out to Bermuda, printed in London in 1615, is also interesting ; and the question whether Shakespeare borrowed any portion of The Tempest from the account of the wreck of the Sea- venture,' receives further elucidation from the documents quoted in Appendix IL The "Poetical Bytet, by R. Rich, soldier," of which the original is in the library of Mr. H. Huth, and of which General Lefroy quotes some stanzas, contains several very quaint turns of speech, We have already men- tioned the account of the proceedings taken in regard to witch- craft in the Bermudas. The volume is well supplied with it- dexes, a feature in its compilation which almost atones for the somewhat excessive prolixity before commented on.