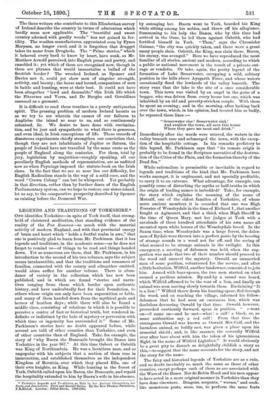 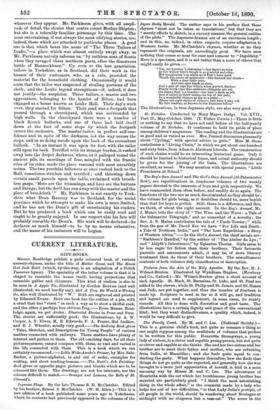 Page 23, 18 October 1890 — LEGENDS AND TRADITIONS OF YORKSHIRE.* ONE identifies Yorkshire—in spite of
Close

LEGENDS AND TRADITIONS OF YORKSHIRE.* ONE identifies Yorkshire—in spite of

York itself, that strong- hold of cloistered meditation, that standing evidence of the reality of the Fax Romana —so much with the material activity of modern England, and with that provincial energy of brain and heart which "holds a fretful realm in awe," that one is positively glad to learn from Mr. Parkinson that it has legends and traditions, in the academic sense—as he does not forget to remind us—of things to be read and things handed down. Yet so numerous are these, that Mr. Parkinson, in his introduction to the second of his two volumes, says the subject seems inexhaustible, and that the traditions and romances of families, connected with the county and altogether omitted, would alone suffice for another volume. There is abun- dance of variety in the collection which has now been published, and in which are found "stories and narra- tives ranging from those which border upon authentic history, and have undoubtedly fact for their foundation, to others whose origin can only have been superstition or fable, and many of them handed down from the mythical gods and heroes of heathen days ; while there will also be found a middle class, consisting of relations in which it is possible to perceive a centre of fact or historical truth, but rendered in- definite or indistinct by the halo of mystery or perversion with which time or ingenuity has surrounded it." Some of Mr. Parkinson's stories have no doubt appeared before, while several are told of other counties than Yorkshire, and even of other countries than of England. Take, for example, the story of "why Buern the Busecarle brought the Danes into Yorkshire in the year 867." At this time Osbert or Osbrith was Ring of Northumbria. He was a licentious man, and so unpopular with his subjects that a section of them rose in insurrection, and established themselves as the independent Kingdom of Bernicia, over which they placed Ella, one of their own knights, as King. While hunting in the forest of York, Osbrith called upon his Baron, the Busecarle, and repaid the hospitality extended to him by Buern's wife in his absence, * Yorkshire _Legends and Traditions, as Told by her Ancient Chroniclers, her Poets,and Journalists, First and Second Series. By the Rev. Thomas Parkinson, F.R.Higt S. London : Elliot Stock. 1888-1890. by outraging her. Buena went to York, bearded his King while sitting among his nobles, and threw off his allegiance. Summoning to his help the Danes, who by this time had arrived in the Ouse, he led them against Osbrith, who had fortified himself in York. "Then," says the Chronicler Gaimar, "the city was quickly taken, and there were a great many people slain. Osbrith, the King, was slain there. Buena, his enemy, was avenged." Here we have reproduced the most familiar of all stories, ancient and modern, according to which a public or national movement is the result of a private out- rage or vendetta. Or take, again, the pretty legend of the formation of Lake Semerwater, occupying a wild, solitary position in the hills above Aysgarth Force, and whose waters occasionally flood the lowlands of the valley beneath. The story num that the lake is the site of a once considerable town. This town was visited by an angel in the guise of a beggar, who was driven from every house but one, which was inhabited by an old and poverty-stricken couple. With them he spent an evening ; and in the morning, after looking back over the town, which, in his opinion, had treated him so badly, he repeated these lines :— "Semerwater rise ! Semerwater sink !

And swallow the town, all save this house Where they gave me meat and drink."

Immediately after the words were uttered, the waters in the valley beneath rose and submerged the town, with the excep- tion of the hospitable cottage. In his remarks prefatoi7 to this legend, Mr. Parkinson says that "its remote origin is probably to be found in the Scripture narrative of the destruc- tion of the Cities of the Plain, and the formation thereby of the Dead Sea."

While rationalism is permissible or inevitable in regard to legends and traditions of the kind that Mr. Parkinson here works amongst, it is unpleasant, and not specially profitable, to carry it to an extreme. What advantage, for example, can possibly come of disturbing the myths or half-truths in which the origin of leading names is imbedded? Take, for example, the story which explains the meaning of the name of Metcalf, one of the oldest families of Yorkshire, of whose more ancient members it is recorded that one was High Forester of Wensleydale in the time of Richard I., that another fought at Agincourt, and that a third, when High Sheriff in the time of Queen Mary, met her judges at York with a cavalcade of three hundred attendants of his own name all mounted upon white horses of the Wensleydale breed. In the Saxon time, when Wensleydale was a large forest, the dales- men of Rydale were thrown into a perfect panic by the hearing of strange sounds in a wood not far off, and the seeing of what seemed to be strange animals in the twilight. In this emergency, a meeting of dalesmen was held, when the sug- gestion was made that two of their number should proceed to the wood and unravel the mystery. Oswald, an unmarried man of some position, volunteered for the service, and after a little hesitation, Wilfrid, another landowner, consented to join him. Armed with boar-spears, the two men started on what seemed a perilous mission. By-and-by a sound was heard, which Wilfrid affirmed to be the roar of a lion, and finally an animal was seen moving slowly towards them. Exclaiming " It is a lion ! " Wilfrid threw down his hunting-spear, fled through the wood, and on reaching the village, informed his fellow- dalesmen that he had seen an enormous lion, which was doubtless devouring Oswald by that time. Oswald, however, proceeded cautiously forward, spear in position. " e went on—it came on—and he met—what ! a calf ! a black, or, as some authorities say, a red calf ! From that time the courageous Oswald was known as Oswald Met-Calf, and the harmless animal, so boldly met, was given a place upon his armorial shield ; and, in like manner, the cowardly Wilfrid ever after bore about with him the token of his ignominious flight, in the name of Wilfrid Lightfoot." It would obviously be a great pity to disturb so delightfully childish a story as this,—to suggest that the name accounts for the story, and not the story for the name.

The fairy and historical legends of Yorkshire are as a rule, and no doubt inevitably so, much the same as those of other counties, except perhaps such of them as are associated with the Wars of the Roses. Nor do Robin Hood and his men appear to have acted in a more original manner in Yorkshire than they have done elsewhere. Dragons, serpents, "worms," and such- like monstrous pests, seem, too, to perform the same feats •

wherever they appear. Mr. Parkinson gives, with all ampli- tude of detail, the stories that centre round Mother Shipton; but she is a tolerably familiar personage by this time. The most entertaining, if not always the most edifying stories, are, indeed, those which are attached to particular places. A good one is that which bears the name of "The Three Tailors of Leake,"—a place which was almost entirely swept away, as Mr. Parkinson naively informs us, "by ruthless sons of Scotia when they ravaged these northern parts, after the disastrous battle of Bannockburn." Up even to the last generation, tailors in Yorkshire, as in Scotland, did their work in the houses of their customers, who, as a rale, provided the material for the household clothing. Occasionally it would seem that the tailor was suspected of stealing portions of the cloth ; and the Leake legend strengthens—if, indeed, it does not justify—the suspicion. Three tailors, a master and two apprentices, belonging to the hamlet of Silton, had been engaged at a house known as Leake Hall. Their day's work over, they started for Silton. Their road was a footpath that passed through a churchyard, which was surrounded by high walls. In the churchyard there were a number of black Scotch bullocks, and one of these had laid itself down at the foot of some steps by which the footpath enters the enclosure. The master-tailor, in perfect self-con- fidence and in spite of the darkness, led the way across the steps, and in so doing strode upon the back of the recumbent bullock. "In an instant it was upon its feet, with the tailor still upon its back. Terrified with its strange burden, it rushed away into the deeper darkness, where, as it galloped round the ancient pile, its snortings of fear, mingled with the frantic cries of its rider, made the place resound with most unearthly noises. The two youthful followers at once rushed back to the Hall, conscience-stricken and terrified ; and throwing down 'certain small parcels upon the table, exclaimed with breath- less gasps, 'Here are the trimmings, and here are the buttons :and linings; but the devil has run away with the master and the piece of broadcloth" Mr. Parkinson is not exactly to York- shire what Dean Ramsay was to Scotland, for the social province which he attempts to make his own is more limited, and he has not the Dean's gift of entertaining his readers. But he has produced a book which can be easily read and ought to be greatly enjoyed. In one respect also his fate will probably resemble the Dean's. His work will be declared—he declares as much himself—to be by no means exhaustive, and the name of his imitators will be Legion.