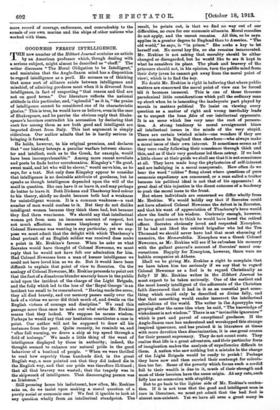 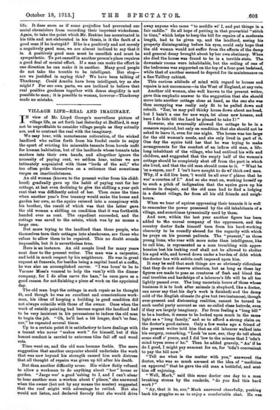 GOODNESS VERSUS INTELLIGENCE. T HE new number of the Hibbert Journal

contains an article by an American professor which, though dealing with a serious subject, might almost be described as "chaff." The writer discusses "The Moral Obligation to be Intelligent," and maintains that the Anglo-Saxon mind has a disposition to regard intelligence as a peril. He accuses us of thinking that some sort of alliance exists between intelligence and mischief, of admiring goodness most when it is divorced from intelligence, in fact of suspecting "that reason and God are not on good terms." Our literature reflects the national attitude in this particular, and, " splendid " as it is, "the praise of intelligence cannot be considered one of its characteristic glories." This is true, he would have us believe, even in the case of Shakespeare, and he parries the obvious reply that Shake- speare's heroines contradict his accusation by declaring that such few among them as are both good and intelligent are imported direct from Italy. This last argument is simply ridiculous. Our author admits that he is hardly serious in bringing it forward.

He holds, however, to his original premises, and declares that "our history betrays a peculiar warfare between charac- ter and intellect, such as to the Greek, for example, would have been incomprehensible." Among more recent novelists and poets he finds better corroboration. Kingsley's "Be good, sweet maid, and let who will be clever," would serve him, as he says, for a text. Not only does Kingsley appear to consider that intelligence is no desirable attribute of goodness, but he speaks as though intelligence depended upon the will of the maid in question. She can have it or leave it, and may perhaps do better to leave it. Both Dickens and Thackeray lend colour to his theory, chiefly no doubt because both had a weakness for unintelligent women. It is a common weakness—a vast number of men would confess to it. But they do not dislike intelligent women because they think them bad, but because they find them wearisome. We should say that intellectual women get from men an immense amount of respect, but not much affection. It seems blasphemy to allow that Colonel Newcome was wanting in any particular, yet we sup- pose we must admit that the delight with which Thackeray's ideal portrait of an English soldier was received does make a point in Mr. Erskine's favour. When he asks us what Socrates would have thought of Colonel Newcome, we must reply that be would not have felt our admiration for him. Had Colonel Newcome been a man of keener intelligence we could not have loved him as we do. But it would have been difficult to explain that point of view to Socrates. On the analogy of Colonel Newcome, Mr. Erskine proceeds to point out that the fact of a disastrous blunder scarcely bears in the public mind upon the incident of the charge of the Light Brigade, and the folly which led to the loss of the' Royal George 'is an incident too small to be remembered. "Having made the error, they all died bravely, and our memory passes easily over the lack of a virtue we never did think much of, and dwells on the English virtues of courage and discipline." We read this passage more than once to make out what virtue Mr. Erskine means that they lacked. We suppose he means wisdom. Perhaps he would say that our hesitation constitutes a case in point. Our author will not be supposed to draw all his instances from the past. Quite recently, he reminds us, and "after full warning, we drove a ship at top speed through a field of icebergs." We made a little thing of the want of intelligence displayed by those in authority; indeed, the thought seemed to enhance our natural pride in the good behaviour of a boatload of people. "When we were thrilled to read how superbly those hundreds died, in the great English way, a man pointed out that they did indeed die in the English way, and that our pride was therefore ill-timed ; that all that bravery was wasted; that the tragedy was in the shipwreck of intelligence. That discouraging person was an Irishman."

Still pressing home his indictment, how often, Mr. Erskine asks us, do we insist upon making a moral question of a purely social or economic one ? We feel it ignoble to look at any question wholly from an intellectual standpoint. The result, he points out, is that we find no way out of our difficulties, no cure for our economic ailments. Moral remedies do not apply, and the unrest remains. All this, so he saya applies in a greater degree to England than to America. "The old world," be says, is "in prison." She seeks a key to let herself out. No moral key fits, so she remains incarcerated. Mr. Erskine is not asking that morality should he either changed or disregarded, but he would like to see it kept in what he considers its place. The pluck and bravery of the prisoners should not, in his opinion, turn the public mind from their duty (even he cannot get away from the moral point of view), which is to find the key.

No doubt Mr. Erskine is right in believing that where public matters are concerned the moral point of view can be forced till it becomes iminoral. This is one of those tiresome paradoxical little considerations which pull the ordinary man up short when he is lamenting the inadequate part played by morals in matters political To insist on viewing every question as a matter of right and wrong inevitably leads us to suspect the bona fides of our intellectual opponents. It is an error which lies very near the root of persecu- tion. A strong tendency to moral arraignment blurs all intellectual issues in the minds of the very stupid. There are certain twisted minds—one wonders if they are more common in England than elsewhere—who always make a moral issue of their own interest. It sometimes seems as if they were really following their conscience through thick and thin, and as if their very goodness led them astray. If we look a little closer at their guide we shall see that it is not conscience at all. They have made long the phylacteries of self-interest and are indulging in a moral masquerade. How often do we hear the word " robber" flung about where questions of pure economic expediency are concerned, or a man called a traitor because his political ideal is not that of his opponents ! A great deal of this injustice is the direct outcome of a tendency to push the moral issue to the front.

But where individuals are concerned we differ wholly from Mr. Erskine. We would boldly say that if Socrates could not have admired Colonel Newcome the defect is in Socrates, and that his want of appreciation of Thackeray's hero would show the limits of his wisdom. Curiously enough, however, we have good reason to think he would have loved the retired officer. Socrates obviously loved and respected Xenophon. If he had not liked the retired brigadier who led the Ten Thousand we should never have had that most charming of memoirs, the Memorabilia. Xenophon was a Greek Colonel Newcome, as Mr. Erskine will see if he refreshes. his memory with the gallant general's account of Socrates' moral con- versations. Happily for Xenophon, however, there were no bubble companies at Athens.

Shall we be giving Mr. Erskine a right to complain that we have taken him too seriously if we say that to regard Colonel Newcome as a fool is to regard Christianity as folly ? If Mr. Erskine writes in the Hibbert Journal he must expect to be taken seriously. One of the earliest and the most keenly intelligent of the adherents of the Christian faith discovered that it had in it as an essential part some- thing which could only be described as divine folly, and that that something would render incorrect the intellectual calculations of the woild. The writer in the Apocrypha was groping after the same idea when he said, "The knowledge of wickedness is not wisdom." There is an "invincible ignorance"- which is part and parcel of exceptional goodness. If the Anglo-Saxon race has understood and worshipped this strange inspired ignorance, and has praised it in literature at times with more devotion than discrimination, it is one great reason for their present supremacy. They do not count costs. They realize that life is a great adventure, and their particular form, of imagination makes the analysis of expediencies difficult to

• them. A nation who saw nothing but a mistake in the charge of the Light Brigade would be ready to perish ! Perhaps they have now and then carried their contempt for calcula- tion too far. Some of the poverty which forms such a sordid foil to their wealth is due to it, much of their strength and most of their heroism have the same origin. At any rate, such folly has no connexion with stupidity.

But to go back to the lighter side of Mr. Erskine's conten- tion. If it is not true that the good and intelligent man is rare in literature, we must yet admit that the bad, fool is almost non-existent. Yet we have all seen a great many in

life. It does seem as if some prejudice had prevented our social chroniclers from recording their impotent wickedness. Again, to take the point which Mr. Erskine has accentuated in his title and not elaborated in his thesis, is it the fault of a good man if he is stupid P If he is a positively and not merely a negatively good man, we are almost inclined to say that it is. A positively good man must be unselfish and must be sympathetic. To put oneself in another person's place requires a good deal of mental effort. If a man can make the effort in one direction he can make it in another. Many good people do not take the trouble to be intelligent. But stop— are we justified in saying this? We have been talking of Thackeray. Could Amelia have been intelligent, try as she might ? For our own parts, we are inclined to believe that real positive goodness together with dense stupidity is not possible to man ; it is possible to woman, however—Thackeray made no mistake.