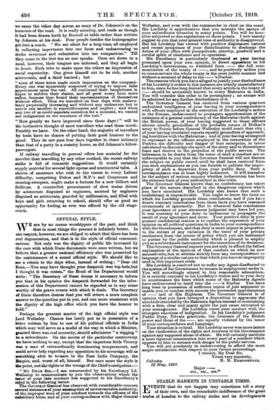 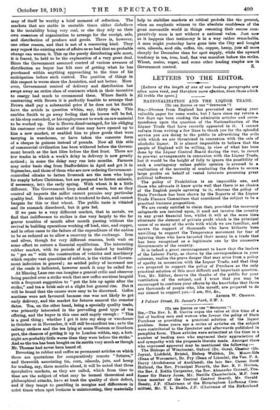 EVENTS that do not happen may sometimes tell a story of their own, and the remarkable indifference of the great trades of London to the railway strike and its developments

may of itself be worthy a brief moment of reflection. The markets that are stable in unstable times either disbelieve in the instability being very real, or else they rely on their

own resources of organization to arrange for the receipt, sale, and distribution of produce and goods. There is, however,

one other reason, and that is not of a reassuring kind. They may regard the existing state of affairs as so bad that no probable change can worsen it. This on the purely distributing side must,

it is feared, be held to be the explanation of a very great deal.

Since the Government assumed control of various avenues of distribution no buyer has felt sure of getting what ho has purchased within anything approaching to the time of his anticipation before such control. The position of things in this respect is worse since the Armistice, and not better. More over, Government control of delivery and distribution has swept away an entire class of contracts which in their incentive to energy had much to recommend them. Where Smith is contracting with Brown it is perfectly feasible to arrange that Brown shall pay a substantial price if he does not let Smith have the article in question within, say, thirty days. This enables Smith to go away feeling that his horses will be fed, or his shop restocked, or his employees set to work on raw material to be worked up. Nor is Brown disadvantaged, for his obliging

his customer over this matter of time may have opened up to him a new market, or enabled him to place goods that were

tarrying in warehouse, or have taken the concrete form

of a cheque in guineas instead of pounds. Now all this side of commercial civilization has been withered before the Govern ment breath as the last lilies before the first frost. There are few trades in which a week's delay in delivery is now greatly noticed ; in some the delay may run into months. Farmers may order basic slag from Staffordshire in April and get it in September, and those of them who are now ordering Governmentcontrolled oilcake to fatten livestock are the men who hope for supply before Christmas, but are prepared to fatten animals, if necessary, into the early spring. With wheat it is a little different. The Government keep ahead of wants, but as they control all imports the miller cannot promise any particular quality loaf. He must take what is tendered to date, and cannot bargain for this or that wheat. The public taste is vitiated and its stomach disordered, but it gets fed.

If we pass to a very different market, that in metals, we find that indifference to strikes is due very largely to the far graver troubles of month after month passing without the revival in building operations working off lead, zinc, and copper, and in other cases to the failure of the expenditure of the nation to be so reduced as to allow a recovery in the exchange. Iron and silver, though for very different reasons, both wait on some effort to restore a financial equilibrium. The interesting rubber market, with its periods of hope dashed by inability to get on " with the construction of vehicles and machinery which require vast quantities of rubber, is the victim of Government indecision in general ; no settled policy of increased use of the roads is indicated, however much it may be called for.

At Mincing Lane one can imagine a general critic and observer being puzzled over a strike week that saw coffee auctions languid with a frequent suggestion to " put the lots up again after the strike," and tea a brisk sale at a slight but general rise. But it will be found that the causes were easy to be discerned. Coffee auctions were not favoured because one was not likely to get early delivery, and the market for futures assured the remoter dates. Tea, on the other hand, being a specially quality trade, was primarily interested in the prevailing good type of tea offering, and the buyer in this case mid sagely enough : " This is a good thing ; whether I get it into my shop or warehouse in October or in November, it will still be excellent tea; as to the railway strikers and the tea lying at some Western or Southern port, the chances of getting it up to London within, say, a fortnight are probably little worse than they were before the strike." And so the tea has been bought on its merits very much as though Mr. Thomas had never been heard of.

Reverting to rubber and coffee as permanent articles on which there are quotations for comparatively remote " futures," and therewith associating tin, corn, oilseeds, jute, and hemp for trading, say, three months ahead, it will be noted that these speculative markets, as they are called, which from time to time are the subject of what may be termed theoretical and philosophical attacks, have at least the quality of their defect, and if they tempt to gambling in margins and differences in quiet times when spot business is uninteresting, they materially help to stabilize markets at critical periods like the present, when an emphatic witness to the absolute confidompee of the great mercantile world in things resuming their oourse comparatively soon is not without a national value. Just now as it happens that testimony is in a way rather remarkable. A man might yesterday have gone into the City and bought oats, oilseeds, seed oils, coffee, tin, copper, hemp, jute all more cheaply for December than for spot supply, while the upward tendency in tea, iron, lead, flax was manifest before the strike. Wheat, maize, sugar, and some other leading staples are in Government control. Z,