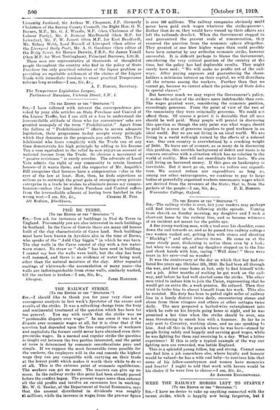 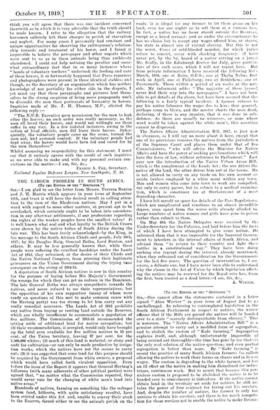 WERE THE RAILWAY HORSES LEFT TO STARVE ? [To THE

EDITOR OF THE " SPECTATOR."] Set,—I have no desire to rake up anything connected with the recent strike, which is happily now being forgotten, but I

think you will agree that there was one incident concerned therewith as to which it is very advisable that the truth should be made known. I refer to the allegation that the railway horsemen callously left their charges to perish of starvation andneglect. For many years I personally had constant and unique opportunities for observing the railwayman's relation

ship towards and treatment of his horse, and I found it impossible to believe the newspaper and other reports which

were sent to us as to these animals being thus ruthlessly

abandoned. I could not help noticing the peculiar and somewhat extraordinary fact that in so many instances where

"bands of voluntary workers" undertook the feeding and care of these horses, it so fortunately happened that Press reporters and photographers were present in those identical stables; an] though, as the Secretary of an organization which has neither knowledge of nor partiality for either side in the dispute, I yet must say that these paragraphs and pictures lent them

selves to the strong suspicion of being more propaganda work to discredit the men than portrayals of humanity to horses. Inquiries made of Mr. J. H. Thomas, M.P., elicited the following reply :—

" The N.U.R. Executive gave permission for the men to leek after the horses; no such order was really necessary, as the men all loved their horses, and would not willingly see them

suffer in any way. In a few isolated instances, owing to the action of local officials, men did leave their horses. Subse

Whilst assuming no responsibility for this statement, I must say that it entirely agrees with the result of such inquiries as we were able to make and with my personal certain convictions on the matter.—I am, Sir, &c.,