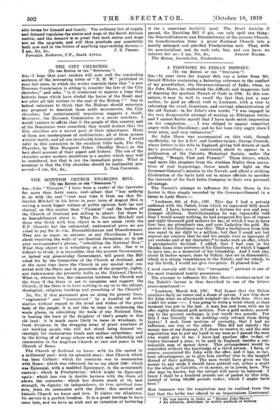 ITo THE EDITOR or THE " SPECTATOR.") hope that your readers will note well the concluding sentence of the interesting letter of " E. H. W." published in your last issue, in which the writer reminds them that "a new Diocesan Commission is sitting to consider the fate of the City churches," and asks, " is it irrelevant to express a hope that historic fanes which have eluded the havoc of the Bomb may not after all fall victims to the zeal of the Bishop ? " One is indeed reluctant to think that the Bishops should entertain any proposal to demolish those noble monuments, the City churches; but unfortunately experience suggests a doubt. Moreover, the Diocesan Commission is a secret conclave. I would venture to affirm that if the people of this country and of the Dominions were consulted, they would declare that the City churches are a sacred part of their inheritance. Many of them are masterpieces of architecture; all of them possess artistic merit; and all are invaluable historical relics. I would refer in this connexion to the excellent little book, The City Churches, by Miss Margaret Tabor (Headley Bros.), as the best short account of their aspect and history. The use of the churches under modern conditions is a matter which may well be considered, but that is not the immediate point. What is essential is that the City churches should be inalienably pre served.—I am, Sir, &c., L. COPE CORNFORD.

Sia,—Like "Unionist," I have been a reader of the Spectator for more than forty years, and—albeit that " has nothing to do with the case "—you may take it from me that Dr. Gordon Mitchell in his letter in your issue of August 23rd is voicing a much bigger volume of public opinion, both lay and clerical, on this matter than " Unionist" and the leaders of the Church of Scotland are willing to admit. Let there be no bemuddlement about it. What Dr. Gordon Mitchell and those who think with him object to is not union (with the

U .F. Church) but the unheard-of, undreamt-of price we are asked to pay for it—viz., Disestablishment and Disendowment. They are as eager, as anxious, as any Churchmen I know about repairing the walls of our Scottish Jerusalem, or, to use your correspondent's phrase, " rebuilding the National Zion." What they object to is rebuilding on a new site. For it is difficult to think, it is incredible, that the present Government; or indeed any present-day Government, will grant the Bill asked for by the Committee, of the Church of Scotland, and at the same time leave the Church in any special way connected with the State. and in possession of the property, rights, and endowments she presently holds as the National.Church. What is, wherein lies, the connexion between the Church and the State if the State is not to recognize and support the Church; if the State is to have nothing to say as to the ethical, theological, religious teaching and preaching of the Church?

No, Sir, if this movement goes on along its present lines, " engineered" and " manoeuvred " by a handful of ecclesiastics without regard to the mind and wishes of the great body of the people, it is not like to issue in reclaiming the waste places, in rebuilding the walls of our National Zion, in healing the hurt of the daughter of God's people in this old land: it is much more likely to issue in wreckage, in fresh divisions, in the dropping away of great numbers of our working people who will not stand being dunned unceasingly for sustentation funds and endless oollections; and by the hiving off of many others who will seek fellowship and communion in the Anglican Church or rest and peace in the Church of Rome.

The Church of Scotland we know: with its life rooted in a millennial past: with its splendid story : that Church which has been Culdaic : which for centuries was in communion with Rome: which was reformed, let us say about 1560: which was Episcopal, with a modified Episcopacy, in the seventeenth century : which is Presbyterian : which might be Episcopal again: which has run in double harness with the State all adown the centuries : which has drawn much of its best strength, its dignity, its independence, its true spiritual freedom, from its connexion with the State: this ancient and historic Church we know and love. It claims our allegiance. Its service is a perfect freedom. It is a great heritage to have come into, and we have no wish and no intention of bartering it for a somewhat doubtful good. The Draft Articles if passed, the Enabling Bill if got, can only spell one thing : the Disestablishment and Disendowment of the present Church. its transformation from a great National Church into a merely enlarged and glorified Presbyterian sect. That, with its provincialism and its mob rule, has, and can have, no interest for us.—I am, Sir, &c., ANDREW IIALDKN. The Manse, Inverkeilor, Forfarshire.