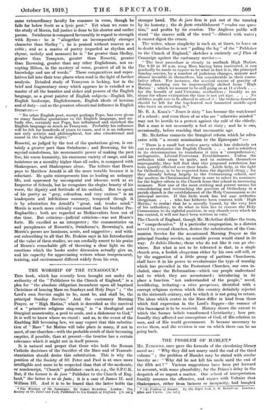 THE WORSHIP OF THE SYNAGOGUE.*

THIS book, which has recently been brought out under the authority of the " Publishers to the Church of England," is a plea for " the absolute obligation incumbent upon all baptized Christians of hearing Mass on Sundays and Holy Days " ; " the Lord's own Service ought to be, must be, and shall be, the principal Sunday Service." And the customary Morning Prayer, or " High Matins," which is described as the survival of a " primitive religious sing-song," is " a theological and liturgical monstrosity, a peril to souls, and a dishonour to God." It is well to know where we stand : and as, in the event of the Enabling Bill becoming law, we may expect that this substitution of " Mass " for Matins will take place in many, if not in most, of our churches—with the probable result of their becoming emptier, if possible, than at present—the treatise has a certain relevance which it might not in itself possess.

It is natural and proper that those who hold the Roman Catholic doctrines of the Sacrifice of the Mass and of Transubstantiation should desire this substitution. This is why the position of the Society of SS. Peter and Paul is at once more intelligible and more to be respected than that of the moderate, or nondescript, "Church" publisher—such as, e.g., the S.P.C.K. But, if the former is de jure " Publisher to the Church of England," the latter is so de facto ; it is a case of James II. and William III. And it is to, be feared that the latter holds the

* The Worship of the Synagogue. By James McArthur. London : The Society of 55. Peter and Paul, Publishers to the Church of England. [38. net.J

stronger hand. The de jure firm is put out of the running by its honesty ; the de facto establishment " evades our ques. tion," and profits by its evasion. The Anglican public will stand " the sincere milk of the word "—diluted with water ; it cannot digest the cream.

The writer, whose simplicity is such as, at times, to leave us

in doubt whether he is not " pulling the leg " of the " Publisher to the Church of England," sketches a curiously na7f Plan of Campaign against the customary service :

" The best procedure is clearly to outflank High Matins. The 9.30 or 10 a.m. sung Mass having been instituted, it can gradually be made to appear to be what in fact it is, the principal Sunday service, by a number of judicious changes, minute and almost invisible in themselves, but considerable in their cumulative effect. For instance, the musical centre of gravity of Sunday morning can be imperceptibly shifted from ' High Matins ; which we assume to be still going on at II o'clock . . for the benefit of mid-Victorian seathoklers ; frankly as an abuse for whose extirpation the time is not yet ripe. . . . No children ought ever to be allowed to attend it : the tedious function should be left for the top-hatted and bonneted middle-aged who insist on attending it."

Mr. R. A. Knox's " Jones is sixty " has become the watchword

of a school : and even those of us who are " otherwise minded " may not he hostile to a protest against the rule of the elderly. But a man is not necessarily a fool at sixty ; and he is one, occasionally, before reaching that unromantic age.

Mr. McArthur connects the liturgical reform which he advocates with " a recent nomination to the Episcopate " :—

" There is a small but active party which has definitely set out to revolutionise the English Church . . . and is relentless in its determination to transform it into a ' comprehensive,' undogmatic, Liberal-Protestant Establishment. Unless the orthodox take steps to unite, and to entrench themselves impregnably, they will find that this proposed revolution has been quietly effected over their heads. Little help, in the fight for Orthodoxy, is to be expected from the dignified clergy ; foi they already belong largely to the Cermanizing school, and the modern de-Christianized State is sure to select its nominees for the higher offices in the Church from this school in increasing measure. Now one of the most striking and potent means for consolidating and entrenching the position of Orthodoxy in a parish church is the establishment of the Holy Communion as its principal service. If this little work has led any orthodox clergyman . . . who has hitherto been content with ' High Matins,' to realize that he is morally bound, by the very fact of his orthodoxy, to do what in him lies to restore the Holy Communion to its rightful position, in any church over which he has control, it will not have been written in vain."

The Church of England, though Mr. McArthur dislikes the term, is." comprehensive" If a particular congregation, in a district

served by several churches, desires the substitution of the Communion Service for the accustomed Morning Prayer as the principal Sunday service, no sensible person would stand in its way. In dubiis libertas; those who do not like it can go elsewhere. But what is not to be tolerated is that, in a single church area, a foolish clergyman either by his own self-will, or by the suggestion of a little group of partisan Churchmen, shall have it in his power to revolutionize the type of worship which has prevailed in the Protestant Churches, our own included, since the Reformation—which our people understand and to which they are accustomed ; introducing in its place a function " not understanded of the people," novel, bewildering, irritating—a ritus peregrinus, identified with a corrupt religious system which this country definitely rejected in the sixteenth century, and to which it is not going to return.

The ideas which centre in the Mass differ in kind from those which find expression in the Lord's Supper—the essence of this Sacrament is to be received. History shows the extent to which the former beliefs transformed Christianity ; how pro. foundly they affected our conceptions of God, of His relation to men, and of His world government. It became necessary to revise them, and the revision is one on which there can be no going back.