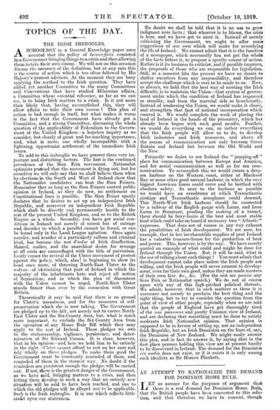 ASCHOOLBOY in a General Knowledge paper once asserted that the policy of laissez-faire consisted in a Government bringing things to a crisis and then allowing them to take their own course. We will not on this occasion discuss the accuracy of the definition, but at any rate this is the course of action which is too often followed by His Majesty's present advisers. At the moment they are busy applying the method to the Irish question. They have added yet another Committee to the many Committees and Conventions that have studied Hibernian affairs, a Committee whose essential reference, as far as we can see, is to bring Irish matters to a crisis. Is it not more than likely that, having accomplished this, they will allow affairs to take their own course ? This plan of action is bad enough in itself, but what makes it worse is the fact that the Government have already got a Committee, and a strong Committee, discussing the whole question of the applicability of Federalism to the Government of the United Kingdom—a hopeless inquiry as we consider, but clearly of great and far-reaching importance, and, what is more, one wholly incompatible with a lightning, opportunist settlement of the immediate Irish issues.

To add to this imbroglio we have present three very important and disturbing factors. The first is the continued prevalence of the Sinn Fein movement. Nationalist optimists pretend that the movement is dying out, but for ourselves we will only say that we shall believe them when by-elections in the South and West of Ireland show that the Nationalist candidates can beat the Sinn Feiners. Remember that as long as the Sinn Feiners control public opinion in Ireland, as they do now, no settlement on Constitutional lines is possible. The Sinn Feiner openly declares that he desires to set up an independent Irish Republic, and moreover an independent Irish Republic which shall be directly and permanently hostile to the rest of the present United Kingdom, and so to the British Empire as a whole. Secondly, you have got social conditions in Ireland not merely of unrest but of outrage and disorder to which a parallel cannot be found, or can be found only in the Land League agitation. Once again murder, and murder of a particularly callous and criminal kind, has become the mot d'ordre of Irish disaffection. Hatred, malice, and the anarchical desire for revenge at all costs are camouflaged with the title of patriotism. Lastly comes the revival of the Ulster movement of protest against the policy, which, alas ! is beginning to show its eead once more, of throwing North-East Ulster to the wolves—of victimizing that part of Ireland in which the majority of the inhabitants hate and reject all notion of Separatism, and in which the plea of discontent with the Union cannot be urged. North-East Ulster stands firmer than ever by the connexion with Great Britain.

Theoretically it may be said that there is no ground for Ulster's uneasiness, and for the measures of selfpreservation which she is now taking. The Government are pledged up to the hilt, not merely not to coerce NorthEast Ulster and the Six-County Area, but, what is much more important, to exclude the Six-County Area from the operation of any Home Rule Bill which they may apply to the rest of Ireland. These pledges we owe to the statesmanship, vigilance, persistence, and determination of Sir Edward Carson. It is clear, however, that in his opinion—and here we hold him to be entirely in the right—Ulster cannot afford to rest on her oars and rely wholly on these pledges. To make them good the Government must be constantly reminded of them, and reminded of them in the sternest way. No doubt if the reminders are persistent enough the pledges will be carried out. If not, there is the greatest danger of the Government, as we have said, bringing matters to a crisis, and then letting them develop in such a way that an entirely new situation will be said to have been reached, and one to which the old pledges will be alleged -not to be applicable. Such is the Irish imbroglio. It is one which reflects little credit upon our statesmen. No doubt we shall be told that it is no use to grow indignant over facts ; that whoever is to blame, the crisis is here, and we have got to meet it. Instead of merely criticizing the Government, we ought to offer some suggestions of our own which will make for remedying the ills of Ireland. We cannot admit that it is the function of a newspaper, which necessarily has not got the whole of the facts before it, to propose a specific course of action. Rather is it its business to criticize, and if possible improve, the proposals of those who are responsible for legislation. Still, at a moment like the present we have no desire to shelter ourselves from any responsibility, and therefore accept the challenge which is sure to be made to us. Now, as always, we hold that the best way of meeting the Irish difficulty is to maintain the Union—that system of government under which the condition of Ireland has improved so steadily, and from the material side so beneficently. Instead of weakening the Union, we would make it closer, and strengthen that fact of national incorporation which created it. We would complete the work of placing the land of Ireland in the hands of the peasantry, which has already been begun with such good results. Further, we would do everything we can, or rather everything that the Irish people will allow us to do, to develop Irish industries and Irish resources, and above all the means of communication not only between Great Britain and Ireland but between the Old World and the New.

Primarily we desire to see Ireland the " jumping-off " place for communication between Europe and America, and for aerial communication as well as for sea communication. To accomplish this we would create a deepsea harbour on the Western coast, either at Blacksod Bay or some other good natural harbour, in which the very biggest American liners could enter and be berthed with absolute safety. As near to the harbour as possible we would have an aerodrome at which Transatlantic airships and Transatlantic aeroplanes could descend. This North-West Irish harbour should be connected by a railway of the English gauge with Larne, and from Lame to Stranraer, pending the making of a tunnel, there should be ferry-boats of the best and most stable kind which could take on board if necessary two " Atlantic" expresses. That does not of course in any way exhaust the possibilities of Irish development. We are sure, for example, that in her inexhaustible supplies of peat Ireland has a valuable treasure-house for the production of heat and power. This, however, is by the way. We have merely quoted an example of what could and might be done for Ireland through the Union. But, it will be said, what is the use of talking about such things ? You must admit that development cannot take place unless the Irish people are willing, and the Irish people will never consent to development, even for their own good, unless they are made masters of their own fate, &c., &c. (For the rest see passim any Sinn Fein or Nationalist speech.) We do not of course agree with any of this high-pitched political rhetoric. We admit, however, that in such matters as these it is necessary not merely to proclaim the best thing and the right thing, but to try to consider the question from the point of view of other people, especially when we are told that the people of England have got thoroughly tired of the non pos.sumus and purely Unionist view of Ireland, and are declaring that something must be done to satisfy moderate Irish Nationalist opinion. That opinion is supposed to be in favour of setting up, not an independent Irish Republic, but an Irish Dominion on the lines of, say, the Dominion of New Zealand. We might easily answer this plea, and in fact do answer it, by saying that in the first place persons holding this view are at present hardly to be discovered in Ireland. The demand for the Dominion via media does not exist, or if it exists it is only among such idealists as Sir Horace Plunkett.