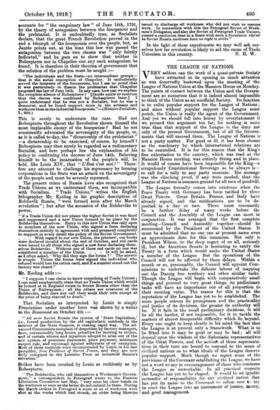 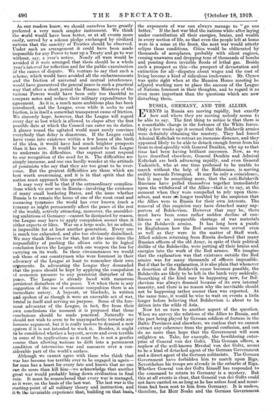 THE LEAGUE OF NATIONS.

VERY seldom can the work of a quasi-private Society have attracted at its opening so much attention as was deservedly bestowed upon the meeting of the League of Nations Union at the Mansion House on Monday. The points of contact between the Union and the Government are so numerous that it is indeed almost impossible to think of the Union as an unofficial Society. Its function is to enlist popular support for the League of Nations ; and since without popular support the League must perish, the Union is really the agent of the Government. And yet we should fall into heresy by overstatement if we pressed this argument too far, for nothing is more true than that support of the League is the duty not only of the present Government, but of all the Governments that will succeed them. The League of Nations is not a party matter. For food or ill, it has been chosen as the machinery by winch international relations are to be controlled. It is for this reason that the King's fine exhortation to the country, which was read at the Mansion House meeting, was entirely fitting and in place. It would of course have been impossible for the King—a scrupulously Constitutional Sovereign as he always is— to call for a rally to any party measure. His message was the clinching proof, if any were needed, that the League of Nations is common ground for all men of goodwill.

The League formally comes into existence when the Peace Treaty with Germany has been ratified by three Great Powers. Great Britain. France, and Italy have already signed, and the ratifications are to he deposited in a day or two. There must necessarily be a further delay of many weeks before the Council and the Assembly of the League can meet in conjunction. It was arranged that the first. complete meeting—Council and Assembly together—should be summoned by the President of the United States. It must be admitted that no one can at present name even an approximate date for this summons. Not only is President Wilson, to the deep regret of us all, seriously ill, but the American Senate is hesitating to ratify the Treaty in a form which would make the United States a member of the League. But the operations of the Council will not be affected by these delays. Within a month or so, presumably, the Council will appoint Commissions to undertake the delicate labour of mapping out the Danzig free territory and other similar tasks. Though the League will begin with comparatively small things and proceed to very great things, its preliminary tasks will have an importance out of all proportion to their seeming value. The reason for this is that the reputation of the League has yet to be established. The more people esteem its promptness and the practicality and justice of its decisions, the greater its authority will be. If it fails in the small preliminary decisions, it will be all the harder, if not impossible, for it to tackle the matters of almost insuperable difficulty which lie beyond. Every one ought to keep clearly in his mind the fact that the League is at present only a framework. What is to be fitted into it may be good or may be bad ; all will depend upon the wisdom of the diplomatic representatives of the Great Powers, and the actiont of those representatives in their turn are bound to respond to the sense of civilized nations as to what ideals of the League deserve popular support. Much though we regret some of the provisions of the Covenant establishing the League, we have not a word to say in encouragement of those who condemn the League as unworkable. In all practical respects the League has yet to be shaped. It would he an ignoble surrender of responsibility for any civilized nation that has put its name to the Covenant to refuse now t try to erect the League into an instrument of justice, marry, and good management. As our readers know, we should ourselves have greatly preferred a very much simpler instrument. We think the world would have been better, or at all events more easily, served by a solemn pledge exchanged by civilized nations that the sanctity of Treaties should be observed. Under such an arrangement it could have been made impossible for any Power to tear up a Treaty and go to war without, say, a year's notice. Nearly all wars would be avoided if it were arranged that there should be a whole year's interval for reflection and for the public examination of the causes of dispute. We venture to say that such a schetae, which would have avoided all the embarrassments and the friction of universal and 'mutual interference, would have guaranteed the general peace in such a practical way that after a short period the Finance Ministers of the various Powers would have been only too thankful to compare notes and reduce their military expenditures by agreement. As it is, a much more ambitious plan has been introduced, and the League, even while it seeks to end. friction, is in itself a somewhat transparent cause of friction. We sincerely hope, however, that the League will regard every day as lost which is allowed to elapse after the first possible date at which the Council can enter on its duties. A glance round the agitated. world. must surely convince everybody that delay is disastrous. If the League could have come into existence within a few hours of the birth of the idea, it would have had much brighter prospects than it has now. It would be most unfair to the League to underrate its difficulties. Our support must respond to our recognition of the need for it. The difficulties are simply immense, and one can hardly wonder at the attitude of pessimists who say that they are too great to be 'overcome. But the greatest difficulties are those which are best worth overcoming, and it is in that spirit that the nation must approach this question.

It may very well be that if the extraordinary complications which we now see in Russia—involving the existence of many small bordering States, and the issue whether Russia is to remain the home of one of the most cruel and menacing tyrannies the world has ever known (such a tyranny as might permanently affect the peace of the rest of the world), actively attracting, moreover, the smouldering ambitions of Germany—cannot be dissipated by reason, the League may have to apply compulsion sooner than it either expects or likes. War on a large scale, let us admit, is impossible for at least another generation. Every one is much too exhausted, and also too obviously. disinclined. We may thank Heaven for that, but at the same time the impossibility of pushing the ultimo; ratio to its logical conclusion leaves the League with one weapon the less for carrying on its work. In these circumstances we would. ask those of our countrymen who were foremost in their advocacy of the League at least to remember their own arguments. In advocating the League they demanded that the peace should be kept by applying the compulsion of economic pressure to any persistent disturber of the peace. The League is already faced with numerous persistent disturbers of the peace. Yet when there is any suggestion of the use of economic compulsion there is an immediate outcry. A boycott, or blockade, is written and spoken of as though it were an execrable act of war, brutal in itself and serving no purpose. Some of the foremost advocates of the League, in fact, flee from their own conclusions the moment it is proposed that those conclusions should be made practical. Naturally we should not wish to seem to be unsympathetic towards any humane argument, but it is really useless to demand a new system if it is not intended to work it. Besides, it ought to be considered. whether a boycott, severe and even terrible in some of its applications as it must be, is not a gentler course than allowing 'nations to drift into a permanent condition of internecine war and massacre over a considerable part of the world's surface.

Although we cannot agree with those who think that war has become too terrible ever to be engaged in again— for man has a heart for every fate and knows that no one can do more than kill him—we acknowledge that another great war would probably bring down civilization in final ruin. It must be remembered that every war is managed, as it were, on the basis of the last war. The last war is the starting-point of all military theory and instruction, and it' the invariable experience that, building on that basis, the exponents of war can always manage to " go one better." If the last war bled the nations white after laying under contribution all their energies, brains, and wealth in every section of life, so that even the people left at home were in a sense at the front, the next war would utterly eclipse these conditions. Cities would be obliterated by thousands of aeroplanes, probably with silent engines, coming unawares and dropping tens of thousands of bombs and pouring down invisible floods of lethal gas. Beside such a prospect as this—the prospect of devastation and extinction for all—disputes about wages and the cost of living become a kind of ridiculous irrelevance. Mr. Clynes was quite right when at the Mansion House meeting he adjured working men to place the success of the League of Nations foremost in their thoughts, and to regard it as even more important than the questions which are now disturbing them.