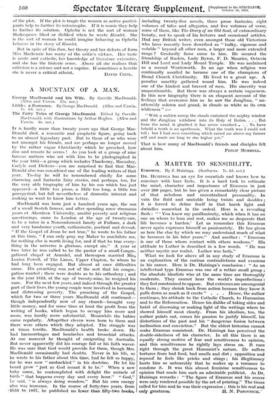 A MOUNTAIN OF A MAN.

George MacDonald and his Wife. By Greville MacDonald. (Allen and Unwin. 21s. net.) IT is hardly more than twenty years ago that George Mac- Donald died, a romantic and prophetic figure, going back to an almost legendary past. But to those of us who were not amongst his friends, and are perhaps no longer moved

by the rather vague Christianity which he preached, how dim and remote he seems ! As you look at a group of nine famous authors who sat with him to be photographed in the year 1865—a group which includes Thackeray, Macaulay, Carlyle and Dickens—you are surprised to find that Mac- Donald also was considered one of the leading writers of that year. To-day he will be remembered chiefly for some charming and fantastic fairy stories, and perhaps, too, for the very able biography of him by his son which has just appeared—a little too pious, a little too long, a little too panegyrical, but full nevertheless of dramatic interest and making us want to know him better.

MacDonald was born just a hundred years ago, the son of a small Scotch farmer, and after spending some strenuous years at Aberdeen University, amidst poverty and religious questionings, came to London at the age of twenty-one, to be a tutor in a Nonconformist family at Fulham, a dark and very handsome youth, enthusiastic, poetical and devout. " If the Gospel of Jesus be not true," he wrote to his father at this time, "I can only pray my Maker to annihilate me, for nothing else is worth living for, and if that be true every- thing in the universe is glorious, except sin." A year or

two later he was called to be the pastor of a small Congre- gational chapel at Arundel, and thereupon married Miss Louisa Powell, of The Limes, Upper Clapton, to whom he

had long been engaged. But almost at once difficulties came. His preaching was not of the sort that his congre_ gation wanted ; there were doubts as to his orthodoxy ; and in the year 1853, at the age of twenty-nine, he resigned his cure. For the next few years, and indeed through the greater part of their lives, the young couple were involved in harassing and distressing poverty. The preaching of the Gospel,

which for two or three years MacDonald still continued— though independently now of any church—brought very little money, and for some time at least the profit from the writing of books, which began to occupy him more and more, was hardly more substantial. Meanwhile the babies came regularly. Altogether eleven were born to them and there were others which they adopted. The struggle was at times terrific. MacDonald's health broke down. He had haemorrhages and headaches and bronchial attacks. At one moment he thought of emigrating to Australia. But never apparently did his courage fail or his faith waver. He was sure that God would provide for them, though Mrs. MacDonald occasionally had doubts. Never in his life, so he wrote to his father about this time, had he felt so happy, for he was now " =shackled" in his doctrine. He let his beard grow "just as God meant it to be." When a new baby came, he contemplated with delight the miracle of birth "that happens every day and every hour." "God," he said, "is always doing wonders." But his own energy also was immense. In the course of forty-two years, from 4855 -to 186-7,. he published no fewer than fifty-fee books, including twenty-five novels, three prose fantasies, eight volumes of tales and allegories, and -five. volumes of verse, some of them, like The Diary of an Old Soul, of extraordinary beauty, not to speak of his lectures and occasional articles. Had any British writer, even amongst those old Victorians who have -recently been described as "bulky, vigorous and voluble" beyond all other men, a larger and more ex-tended range ? Gradually fame came to him. He secured the friendship of Ruskin, Lady Byron, F. D. Maurice, Octavia Hill and Lord and Lady Mount Temple. He was acclaimed as a second Wordsworth. In an age when religion was continually assailed he became one of the champions of Broad Church Christianity. He lived to a great age. A peculiar sanctity gathered round him. He was indeed one of the kindest and bravest of men. His sincerity was unquestionable. But there was always a certain vagueness. In this new biography there is an eloquent account of the feelings that overcame him as he saw the Jungfrau, "un- utterably solemn and grand, in clouds as white as its own whiteness" :— " With a sudden sweep the clouds curtained the mighty window and the Jungfrau withdrew into its Holy of Holies. . . . But from the mind it glorified it has never vanished.. . . To have beheld a truth is an apotheosis. What the truth was I could not tell ; but I had seen something which raised me above my former self and made me long to rise higher yet."

That is how many of MacDonald's friends and disciples felt