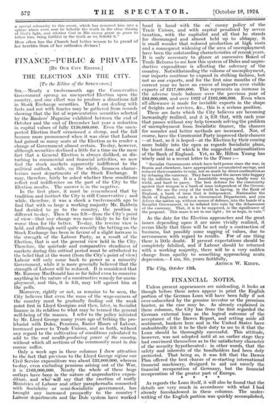 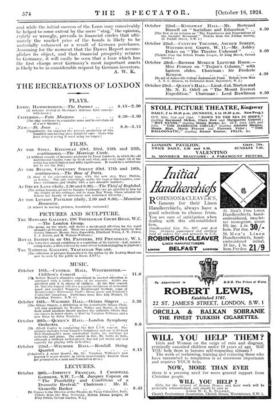 Unless present appearances are misleading, it looks as though before these notes appear in print the English portion of the German Loan will have been fully if not over-subscribed by the genuine investor or the premium hunter, as the case may be. As already explained in these columns, the City has from the first regarded the German external loan as the logical outcome of the acceptance of the Dawes Report, and setting aside all sentiment, bankers here and in the United States have undoubtedly felt it to be their duty to see to it that the- Loan should be thoroughly successful. This attitude, however, was not adopted until at an earlier stage they had convinced themselves as to the satisfactory character of the security hypothecated : in other words, that the safety and interests of the bondholders had been duly protected. That being so, it was felt that the _Dawes Plan offered the best chance of re-starting international financial machinery, designed, to aid not merely the financial recuperation of Germany, but the financial recuperation of the greater part of Europe. * * As regards the Loan itself, it will also be found that the details are very much in accordance with what I had already foreshadowed in these columns. The under- writing of the English portion was quickly accomplished; and while the initial success of the Loan may conceivably be helped to some extent by-the mere "stag," the opinion, r%ghtly or wrongly, prevails in financial circles that ulti- mately the market price of the bonds is likely to be materially enhanced as a result of German purchases. Assuming for the moment that the Dawes Report accom- plishes its object, and that financial prosperity returns to Germany, it will easily be seen that a loan which has the first charge over Germany's most important assets is likely to be in considerable request by German investors. A. W. K. A. W. K.