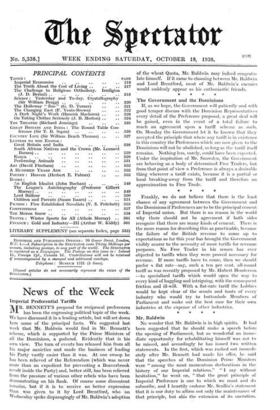 MR. BENNETT'S proposal-for reciprocal preferences has been the engrossing political topic of the week. We have discussed it in a leading article, but will set down here some of the principal facts. We suggested last week that Mr. Baldwin would find in Mr. Bennett's scheme, which is supported by the Prime Ministers of all the Dominions, a godsend. Evidently that is his own view. The turn of events has released him from all his major anxieties and made the business of leading his Party vastly easier than it was. -At -one swoop he has been relieved of the Referendum (Which was never more than an expedient for preventing a Beaverbrook revolt inside the Party) and, better still,- has been relieVed from the presiure -of various other rebels- who have been demonstrating on his flank. Of course some discontent remains, but if it is to receive :no better expreSsion than ,was given: to it by Lord Breptford, who :on Wednesday spoke disparagingly Of Mi. Baldwin's 'adoption of the wheat Quota, Mr. Baldwin may indeed congratu- late himself. If it came to choosing between Mr. Baldwin and Lord Brentford, most of Mr. Baldwin's enemies would suddenly appear as his enthusiastic friends.