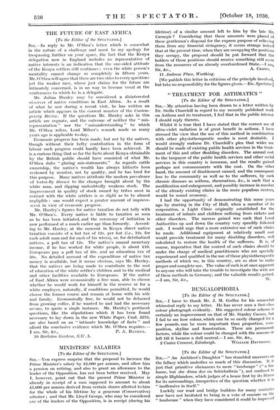 [To the Editor of the SPECTATOR.] SIR,—My attention having been drawn to a letter written by Dr. Stella Churchill in regard to my recently published work on Asthma and its treatment, I feel that in the public interest I should reply thereto. Whilst it is true that I have stated that the correct use of ultra-violet radiation is of great benefit in asthma, I have stressed the view that the use of this method in combination with other physiotherapeutic modes is most desirable. I would strongly endorse Dr. Churchill's plea that wider use should be made of existing public health services in the treat. ment of this and other disabling disorders. The annual cost to the taxpayer of the public health services and other social services in this country is immense, and the results gained perhaps not commensurate with the cost. On the other hand, the amount of disablement caused, and the consequent loss to the community as well as to the sufferers, by such chronic diseises as asthma, rheumatism, &c., is such that a modification and enlargement, and possibly increase in number of the already existing clinics in the more populous centres, would be sound economy.

I had the opportunity of demonstrating this some years ago by starting in the City of Hull, when a member of its corporation, a Light Clinic originally established for the treatment of infants and children suffering from rickets and other disorders. The success gained was such that Local Authorities up and down the country very speedily followed suit. I would urge that a more extensive use of such clinics be made. Additional equipment at relatively small cost would provide treatment for many disabling disorders, well calculated to restore the health of the sufferers. It is, of course, imperative that the control of such clinics should be under the charge of medical practitioners who are specially experienced and qualified in the use of those physiotherapeutic methods of which we, in this country, are so slow to make proper and complete use. The value of such is at once apparent to anyone who will take the trouble to investigate the wide use of these methods in Germany, and the valuable results gained.