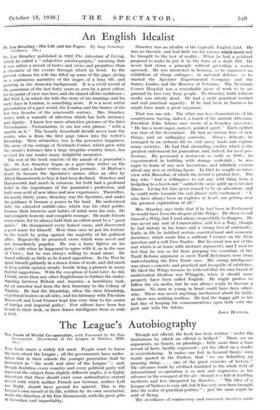 St. Loe Strachey : His Life and his Paper. By Amy Strachey. (Collancz. Ns.) Sr. Loe Strachey published in 1922 The Adventure of Living, which he called a " subjective autobiography," meaning that it was rather a record of tastes and views and prejudices than a chronicle of the events through which he lived. In the present volume his wife has filled up some of the gaps, giving us a continuous narrative of the stages of a busy life, and painting in the domestic background. It is a vivid record of the panorama of the last forty years as seen by a great editor, for his point of view was hers, and she shared all his confidences. But Part I, in which she tells the story of his marriage and his early days in London, is something more. It is a most artful presentation of a past world, the London and the Surrey of the last two decades of the nineteenth century. Mrs. Strachey writes with a warmth of affection which has both intimacy and dignity. I know few more attractive pictures of the later Victorianism—Victorianism, to use her own phrase, " with a sparkle in it." The homely household details never bore the reader, who is from the first page taken into the writer's friendship. Most attractive, too, is the pervasive happiness. The story of the cottage at Newlands Corner, which grew with the owner's fortunes into a large irregular country house, has revived for one reader many delightful memories.

The rest of the book consists of the annals of a journalist's life. St. Loe Strachey began as a part-time writer on the Spectator and a leader writer on other journals. At Hutton's death he became the Spectator's owner, after an offer by Alfred Harmsworth to buy it had been declined. Strachey and Harmsworth had much in common, for both had a profound belief in the importance of the journalist's profession, and both were avid of new ideas and new experiences. Thereafter, for nearly thirty years, Strachey was the Spectator, and under his guidance it became a power in the land. He understood fully the educated middle-class which was his chief public, because their interests and habits of mind were his own. He bad complete honesty and complete courage. He made friends everywhere, for he always held that an editor must be a " good mixer." He championed every honest cause, and discovered a good many for himself. More than once he put his fortune to the touch by going against the majority of his political allies. Repeatedly he preached views which were novel and not immediately popular. He was a lusty fighter on his party's side when he happened to agree with it, as in the case of Ulster ; but he was always willing to stand alone. Ile feared ridicule as little as he feared opposition. In the War he spent himself gallantly in a dozen forms of work, and did much to keep public opinion steady, beside being a pioneer in many fruitful suggestions. With the exception of Lord Grey, he did, I think, more than any other Englishman to further the under- standing between Britain and America—a hereditary task, for an ancestor had been the first Secretary to the Colony of Virginia. He had the friendship, often the close friendship, of political leaders on all sides, and his intimacy with Theodore Roosevelt and Lord Cromer kept him very close to the centre of foreign and imperial policy. Few editors have been less bound to their desk, or have drawn intelligence from so wide a field. Strachey was an idealist of the typically English kind. He was no theorist, and had little use for visions which could not be brought to the test of reality. When he had a political proposal to make he put it in the form of a draft Bill. Ile never laid down a principle without providing a modem operandi. He was interested in housing, so he organized an exhibition of cheap cottages ; in national defence. so he started the Spectator Experimental Company and the Surrey Guides and the Reserve of Veterans. The Newlands Corner Hospital was a remarkable piece of work to be or- ganized by two very busy people. To Strachey faith without works was utterly dead. lie had a swift practical instinct and real practical sagacity. If he had been in business he might have made a great organizer.

That was one side. The other was less characteristic of his countrymen, having, indeed, a touch of the ancient Athenian. President John Adams once wrote of a Strachey ancestor : " He has a most eager, earnest, pointed spirit." Each epithet was true of the descendant. Ile had an intense love of new things, and an unflagging curiosity. Always delicate, he managed in an arduous life to visit many lands and explore many societies. He had that abounding vitality which is the greatest endowment for journalism, and, indeed, for most pro- fessions. He possessed a motor-car as early as 1899 ; he experimented in building with strange materials ; he was eager to learn of any new inventions, and infinitely curious about any new or striking figure. In 1924 he sought an inter- view with Mussolini, of which the record is printed here. The boy who " had a willingness to eat any wild thing from a hedgehog to a beech-nut " carried the sonic spirit up to his last illness. Living for him never ceased to be an adventure. and he could write towards the end almost with excitement : " I, who have always been an explorer at heart, am getting near the greatest exploration of all."

Mrs. Strachey says truly that if he had been in Parliament he would have been the despair of the Whips. He chose to call . himself a Whig, but I used always respectfully to disagree. Ile was never any sort of Conservative, still less a Tory, though he had history in his bones and a strong love of continuity. Early in life he imbibed certain constitutional and economic doctrines, which made him a militant Unionist on the Irish question and a stiff Free Trader. But his mind was not of the sort which is at home with abstract arguments, and I used to feel that he was as far from grasping the essentials of the Tariff Reform argument as most Tariff Reformers were from understanding the Free Trade case. His strong intelligence was always concrete and practical and incapable of subtleties. He liked the Whigs because he believed that his own brand of unrhetoricat idealism was Whiggish, when it should more properly have been called English. He might profess to follow the via media, but he was always ready to become a fanatic. No man so young in heart could have been other- wise. There was never anything mechanical about his faith, as there was nothing rootless. Ile had the happy gift to his last day of keeping his communications open both with the past and with the future.