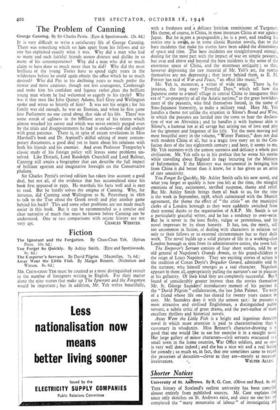 MR. CHUN-CHAN YEH must be counted as a most distinguished recruit to the number of foreigners writing in English. For their matter alone the nine stories that make up The Ignorant and the Forgotten would be important ; but in addition, Mr. Yeh writes beautifully,

with a freshness and a delicate lyricism reminiscent of Turgenev, His theme, of course, is China, in most instances China at war against Japan. But he -is:not a propagandist ; he is a poet, and reading his stories one is awe*, as in some classic Russian novels, that to the bare incidents that make his stories have been added the dimensions of space and time. The bare incidents are straightforward enough, dealing for the mast part with the impact of war on simple peasants, but over and above and beyond the bare incidents is the sense of the

enormous space of China, and the enormous antiquity; that, however depressing the raw material of Mr. Yeh's art, te stories themselves are not depressing ; they leave behind them, as E. M. Forster has said of War and Peace, "an effect like music."

Mr. Yeh is, moreover, a writer of wide range. There is, for instance, the long story " Eventful Days," which tell how the Japanese come to a-Small village in central China to inaugurate their era of " cd-prosperity of all the Asiatic nations," to the great bewilder- ment of the peasants, who find themselves forced, in the name of Sino-Japanese -fraternity, to make a military road. Here Mr. Yeh handles a theme nor unlike the situation in Silone's Bread and Wine, in which the peasants are herded into the town to hear the declara- tion of war on Abyssinia ; and he handles it with humour akin to Silone's, a humour not at all savage but arising out of love and pity for the ignorant and forgotten of his title. Yet the most moving and most beautiful story in the volume, " Winter Fantasy," does not deal with modern China at all, but is a tragic love story set in the Con- fucian days of the late eighteenth century ; and here, it seems to me, Mr. Yeh recreates with the utmost sureness and delicacy a whole past civilisation. Mr. Yeh tells us in his preface that he wrote his stories while travelling about England in 1945 lecturing for the Ministry of Information. If the Ministry was instrumental in bringing him from China it did better than it knew, for it has given us an artist of rare sensitivity.

You Forget So Quickly, Mr. Ashley Smith calls his new novel, and what you forget so quickly is how you felt at the time, the mingled emotions of fear, excitement, terrified suspense, shame and relief. But Mr. Ashley Smith brings them all back to us, for the time is the week in September, 1938, which culminated with the Munich agreement, the theme the effect of " the crisis" on the municipal clerks of a London borough as they were suddenly switched from their normal duties to the organisation of A.R.P. Mr. Smith is not a particularly graceful writer, and he has a tendency to over-write. But he is never in the least flashy,, vulgar or pretentious, and his novel impresses by its sheer honesty. It has, too, the merit, still too uncommon in fiction, of dealing with characters in relation not only to their fellows or to external circumstances but to their daily work. The novel builds up a solid picture of life in a working-class London borough as seen from its administrative centre, the town hall.

The Emperor's Servant consists of four short stories, told by an old general of Napoleon's Grande Armee, to his grand-children in the reign of Louis Napoleon. They are exciting stories of action in the tradition of Conan Doyle's Brigadier Gerard, admirably told by the narrator, who himself emerges as a real character. Napoleon appears in them all, appropriately pulling the narrator's ear in pleasure at his gallantry. Of their kind they are completely successful. But I found of 'considerably greater interest than the stories themselves Mr. St. George Saunders' introductory memoir of his partner in the "David Pilgrim "_ collaboration, the late John Palmer. To write of a friend whose life one has shared for twenty years cannot be easy. Mr. Saunders does it with the utmost tact: he presents a most attractive and civilised Englishman, a distinguished public servant, a subtle critic of great drama, and the part-author of many excellent thrillers and historical novels.

customary in whodunits. Miss Bennett's character-drawing is 30 good that one would like to see her exercise it in a straight novel Her large gallery of minor characters—civil servants evacuated to

small town in the home counties, War Office soldiers, and so on— is very well done indeed ; and she has a nice wit and a real feeling for comedy ; so much so, in fact, that one sometimes came to regard the processes of detection—clever as they are—merely as necessary