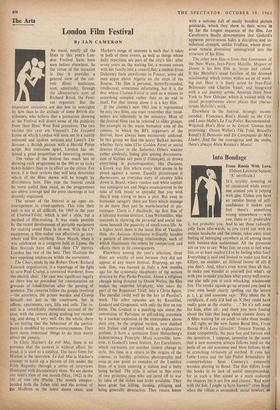 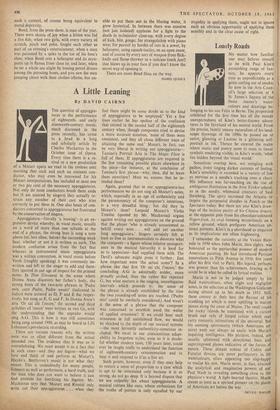 From Russia With Love. (Odeon, Leicester Square; 'A' certificate.)

IT's terribly lowering to sit unamused while every- one around you is yelping with glee. Unless you have an outsize bump of self- confidence it makes you feel there's something wrong somewhere — with you, them or it: preferably it, but probably you. And to see those radiantly jolly faces afterwards, as you crawl out with an outsize headache and the creeps, takes away your feeling of belonging anywhere at all among them with banana-skin suddenness. All the pressures are on you to say: What fun; or even to feel what fun, or at least oughtn't Ito be feeling what fun? Everything is said and looked to make you feel a killjoy, an outsider, an illiberal (worst of all) if you don't. And, what's even worse than all that, to make you wonder at yourself just what's up with you to make you hate what pretty well every- one else tells you is such whacking, wholesome fun. The smoke signals go up around you (and in your own head) clearly spelling out the letters p, r, i, g; and someone says: 'Pity about the A certificate, if only it'd had an X they could have really gone at the cruelty. . . .' So it's soft soap for kids, after all : and there you were fussing about the kids that hang about cinema doors at A films waiting for an adult to take them inside.

All right, so the new James Bond film, From Russia With Love (director: Terence Young), is made competently, the pace fast and furious and the invention, I suppose, inventive in the sense that a new nonsense always follows hard on the heels of an old nonsense and blow follows blow in crunching virtuosity of method. It even has Lotte Lenya and the late PedrO Armendariz to counterbalance Sean Connery's extremely wooden playing as Bond. The film differs from the books in its lack of social oneupmanship, for in such a film aimed at a mass audience the chances for it are few and clumsy. 'Red wine with the fish, I ought to have known!' cries Bond when the villain is unmasked, social howlers, in such a context, of course being equivalent to moral depravity.

Bond, from the press show, is man of the year. There were shouts of joy when a kitten was fed a live fish; when two girls, with every variety of scratch, pinch and poke, fought each other as part of an evening's entertainment; when a man was poisoned by a spike in the toe of his boss's shoe; when Bond sent a helicopter and its occu- pants up in flames from close to; and later, when he set a whole sea alight by tossing petrol drums among the pursuing boats, and you saw the men jumping about with their clothes aflame, but un-

able to put them out in the blazing water, it grew hysterical. In between there was massive (not just isolated) applause for a fight to the death in technicolor close-up, with every degree of kick, bite, gouge; for strangulation with piano wire; for pursuit by hordes of rats in a sewer, by helicopter, using squash-tactics, on an open moor, and of course by every sort of weapon from flick- knife and flame-thrower to a suitcase (such fun!) that blows up in your face if you don't know the secret way of opening it.

There are more Bond films on the way.