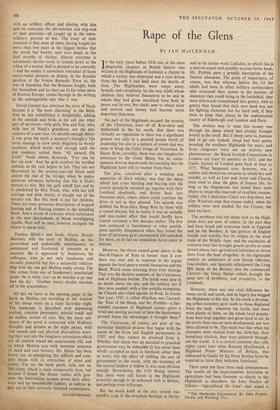 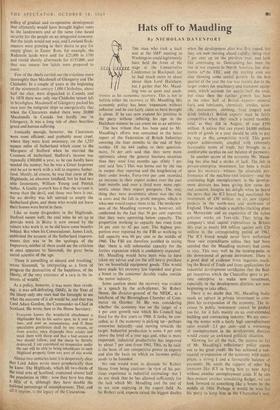 Rape of the Glens

BY IAN MAcLENNAN Ithe sixty years before 1850 one of the most 'despicable chapters in British history was written in the Highlands of Scotland, a chapter in which a society was destroyed and a race driven from the lands it had held since the depths of time. ,The Highlanders were swept away, brutally and relentlessly, by the very chiefs whose children they believed themselves to be and to whom they had given uncritical trust both in peace and in war, but chiefs now to whom wool and mutton and money had become more important than men.

No part of the Highlands escaped the severity of the Clearances, least of all Ross-shire and Sutherland in the far north; that there was virtually no opposition to them was a significant pointer not only to a puzzled people bereft of leadership but also to a pattern of events that was soon to bring the Celtic fringe of Victoriana. In Easter Ross, certainly, there was one imaginative resistance to the Great Sheep, but its conse- quences were so disastrously fan:reaching that the Highlands have still to recover from them.

The plan, conceived after a wedding and quantities of illicit whisky, was that the sheep which had come bleating and baa-ing into the county should be rounded up, together with their Lowland shepherds, and driven back into Inverness-shire, where others could continue the drive or not as they pleased. The episode was dubbed the Ross-shire Sheep Riot by those with a vested interest, but in reality it was an amiable and non-violent affair that would hardly have roused comment a few decades earlier. The five men sentenced to banishment or other punish- ment sensibly disappeared when they found the door of Inverness gaol conveniently left unlocked for them, so in fact no immediate harm came to anyone.

However, the threat caused great alarm to the Sheriff-Depute of Ross (a bosses' man if ever there was one) and in response to his urgent appeals the local gentry armed themselves and the Black Watch came hurrying from Fort George. That was the decisive moment of the Clearances, and of Highland decline. The lairds were now in no doubt about the law, and the military too if they were needed; with a few notable exceptions, the Church also sided against its flock. In Gaelic that year, 1792, is called Bliadhna nan Caorach, the Year of the Sheep, and Mr. Prebble—a fair- minded exponent of Highland causes—gives a vivid and moving account of how the landowners pressed home the advantages it brought them.* The Clearances, of course, are part of the particular historical process that began with the union of the Scots and English parliaments in 1707, and they cannot be divorced from it. Whether that union was an essential to practical government may be debatable (it has never been wholly accepted as such in Scotland, either then or now), but the effect of shifting the seat of government to the south, with the tendency of the natural leaders to follow it, was soon obvious enough. Nevertheless the 1745 Rising showed that there were still forces in the Highlands powerful enough to be reckoned with in Britain, and perhaps even in Europe.

But the death knell of the clan system was speedily rung in the irresolute decision at Derby and in his earlier work Culloden, to which this is a natural sequel and possibly an even better book, Mr. Prebble gave a graphic description of the funeral obsequies. The point of importance, of course, was that whereas before the. '45 the chiefs had been in effect military commanders who measured their power in the number of clansmen they could bring to the battlefield, they were afterwards transformed into gentry. And as gentry they found that their sore need was not for fighting clansmen but for hard cash, if they were to keep their places in the sophisticated society of Edinburgh and London and Paris.

The obvious way to raise this money was through the sheep which had already brought wealth to the south. But if sheep came in, humans had to go out. Indeed, sheep had been gently invading the southern Highlands for years, and Scots emigrants were not an entirely new phenomenon : the Royal Scottish Corporation in London can trace its ancestry to 1611, and the Gaelic Society of London goes back at least to 1777. What happened now, however, was a sudden and monstrous invasion in which fire and murder, as well as Law and Army and Church, were used to clear the glens of human life. So long as the Napoleonic war lasted there were efforts to retain this reservoir of excellent cannon- fodder (the Caledonian Canal was dug then), but after Waterloo even that excuse ended; when the soldiers were next needed, for the Crimea, the land was bare.

The problems that the sheep took to the High- lands were not new, of course. In the past they had been faced and overcome both in England and on the Borders. A vast portion of English wealth and nobility has its origins in the wool trade of the Middle Ages; and the enclosures of common land that brought greater profits to some turned others into agricultural labourers or drove them from the land altogether. In the eighteenth century an admixture of new bloods (Merino, Lincolnshire, and Spanish) refashioned the Long Hill sheep of the Borders into the commercial Cheviot--the Great Sheep—which brought the same sort of problems, and prosperity, to the Lowlands.

However, there was one vital difference be- tween north and south, and its legacy has dogged the Highlands to this day. In the south a develop- ing urban economy gave work to those displaced from the land: whatever the faults, and there were plenty of them, on the whole local popula- tions were kept together and given food to eat. In the north there was no such development, nor was there allowed to be. The result was that when the clansmen were excised from the dathchas, their hereditary districts, they were scattered through- out the world: it is a cynical comment that only eighty years later when Ramsay MacDonald, a Highland Prime Minister of Britain, was addressed in Gaelic by his Nova Scotian hosts he required to have their welcome translated.

There need not have been such consequences. The results of the improvements inevitable in agriculture had been foreseen as clearly in the Highlands as elsewhere. Sir John Sinclair of Ulbster—`Agricultural Sir John'—had urged a

* THE HIGHLAND CLEARANCES. By John Prebble. (Seeker and Warburg, 35s.)

policy of 'gradual and co-operative development that ultimately would have brought higher rents to the landowners and at the same time based security for the people on an integrated economy. But the lairds would not wait, and Lowland flock- masters were pressing in their desire to pay for empty glens; in Easter Ross, for example, the Redcastle lands were sold for £25,000 in 1790 and resold shortly afterwards for £135,000, and that was money few lairds were prepared to resist.

Few of the chiefs carried out the evictions more thoroughly than Macdonell of Glengarry and The Chisholm. In a couple of years at the beginning of the nineteenth century 1,000 Chisholms, about half the clan, were dispatched to Canada and by 1878 there was only one Chisholm tenant left in Strathglass. Macdonell of Glengarry packed his men into the emigrant ships so energetically that when the Clearances ended there were 20,000 Macdonells in Canada but hardly one in Glengarry. It was a long tale of sheer heartless greed and human suffering.

Ironically enough, however, the Clearances were most efficient, and probably most cruel, where they were least necessary, on the 1,735 square miles of Sutherland which, came to the Marquess of Stafford when he married the Countess of Sutherland. Stafford's income was reputedly £300,000 a year, so he can hardly have needed the money; but he was a Great Improver and he set to work with a will to improve Suther- land. Mostly, of course, he was that curse of the Highlands, an absentee landlord, but he had two able lieutenants, William Young and Patrick Sellar. A Gaelic proverb has it that the servant is worse than the devil, and those two bore it out, for no devilry was left untried to empty the Sutherland glens, and those who would not leave their homes were burnt in them.

Like so many do-gooders in the Highlands, Stafford meant well; the coal mine he set up to provide work in Brora is now owned by the miners who work it, so he did leave some benefits behind. But when his Commissioner, James Loch, -published the account of the Sutherland improve- ments that was to be the apologia of the Improvers, neither of them could see the criticism at once apparent to Sismondi, the great Swiss social scientist of the age.

There is something so absurd and revolting,' :wrote Sismondi, 'in interpreting as a form of progress the destruction of the happiness, of the liberty, of the very existence of a race in the in- terests of wealth.'

As .a policy, however, it was more than revolt- ing: it was self-defeating. Oddly, in the Year of the Sheep only one man had the foresight to see what the outcome of it all would be, and that was Lord Adam Gordon, the Commander-in-Chief in Scotland. He wrote then to the Home Secretary: 'Everyone knows the wonderful attachment a

Highlander has to his native spot, be it ever so bare,. and ever so mountainous, and if these speculative gentlemen shall by any means, or from avarice, once dispeople their estates and stock them with sheep and that a bad season or two should follow, and the sheep be thereby destroyed, I am convinced no temptation under the sun will be able to bring inhabitants to such Highland property from any part of this world.

Almost two centuries later it is desperately clear that Lord Adam wrote more prophetically than he knew. The Highlands, which fill two-thirds of the total area of Scotland, contained almost half the population in 1801 : now they have less than a fifth' of it, although they have double the national percentage of unemployment. That, and