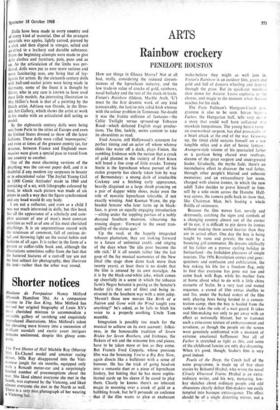 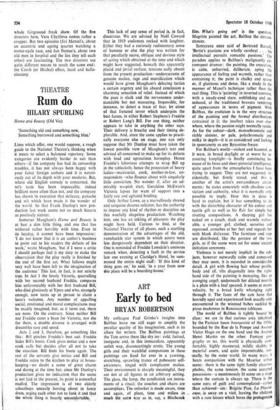 How are things in Glocca Morra? Not at all bad, really, considering the reduced circum- stances of the leprechaun industry, and the low trade-in value of crocks of gold, rainbows, nasal balladry and the rest of the stock-in-trade. Finian's Rainbow (Odeon, Marble Arch, 'U') must be the first dramtic work of any kind (conceivably, the last) to mix rabid Irish whimsy with the colour problem in Tennessee. No doubt it was the frantic collision of fantasies—the Celtic Twilight versus spruced-up Tobacco Road—which defeated English stage produc- tions. The film, luckily, seems content to take its absurdities as read.

Fred Astaire, still Hollywood's synonym for perfect timing and an actor off whom whimsy slides like water off a duck, plays Finian, the rambling Irishman with the notion that a crock of gold planted in the vicinity of Fort Knox will breed a fine crop of little crocks. Tommy Steele is the leprechaun whose pursuit of his stolen property has clearly taken him by way of Bermondsey : a strong dash of irreducible Cockney and a fetching early appearance, heavily disguised as a large shrub prancing on a pair of dapper white shoes, make even the role of neurotic leprechaun tolerable, if not exactly winning. And Keenan Wynn, the pig- headed Senator who later turns up in black- face, is given an equally engaging introduction —sitting under the toppling portico of a nobly decayed Southern mansion, rehearsing the rousing slogan: 'Forward to the sweet tran- quillity of the status quo.'

Up the road, at the happily integrated tobacco plantation, they are looking forward to a future of unlimited credit, and singing of the days when 'the idle poor become the idle rich.' If it all sounds rather like the last gasp of the fey musical economics of the New Deal (the stage show dates back more than twenty years), at least there is no doubt that the film is amused by its own nostalgia. As it is by the black-and-white joke, which comes up cheerfully in a scene in which the tobacco farm's Negro botanist is posing as the Senator's butler (it's that sort of film) and being in- structed in the Southern way with a mint julep. 'Haven't those new movies like Birth of a Nation and Gone with the Wind taught you anything?' he's asked, as he fails to hitch his voice to a properly soothing Uncle Tom mumble.

Integration is possibly too much for the musical to achieve on its own account : folksi- ness, in the honourable tradition of Seven Brides for Seven Brothers, and Irishness, the flickers of wit and the winsome bits and pieces, have to be taken more or less as they come. But Francis Ford Coppola, whose previous film was the bouncing You're a Big Boy Now, again directs like a bulldozer with a sense of humour. He has the trick of going head-on into a romantic duet or a piece of leprechaun foolery, but hinting that he has more sophis- ticated cards up his sleeve if he cared to play them. Clearly he knows there's no inherent magic in mooning over a crock of gold or a

• babbling brook, but he'll persuade an audience that if the .film wants to play at exuberant %-•

make-believe they might as well join in. Finian's Rainbow is an outdoor film, green and gold and full of dancers wheeling and leap;ne through the grass. But its quick-cut numbe,-s slow down for Astaire. Leave euphoria to the chorus, and magic to the moment when Astaire reaches for his stick.

The Paris Pullman's Hungaro-Czech pro- gramme is also to be seen. Istvan Szar,.. Father, the Hungarian half, tells very de.' v a story that could well have collapsed irro mawkish lumpishness. The young hero.s fame- an overworked surgeon, has died prosaically ,if a heart attack at the end of the war. Growing up, the timid child sustains himself on a tew tangible relics and a diet of heroic fantasy: Avengers-style visions of his spectacled father as a partisan being chased over rooftops. dreams of the great surgeon and underground leader. Gradually, the myths fade; there's an inconclusive effort to discover the real father, through other people's blurred and unheroic memories; and an extraordinary last scene, charged with elusive ironies, in which the now adult Tako decides to prove himself to him- self by a solo swim across the Danube. Half- way across, the camera pulls back to show that, like Chairman Mao, he's leading a whole flotilla of swimmers.

Because the film moves fast, nervily and dextrously, catching the signs and symbols of a changing country almost out of the corner of its eye, it is difficult to pin down its ironies without making them sound heavier than they are in actual effect. One day the boy is being taught by nuns and priests; the next by a bouncing girl communist. He dreams idyllically of his father on a prewar cycling holiday in Switzerland—the forbidden pleasures of simple tourism. The 1956 Revolution comes and goes: quietness and confusion and exhilaration, the boy risking his life for a freedom flag, only to find that everyone has gone out too and come back with flags, while his mother frets at home about what to do with a little china statuette of Stalin. In a very taut and muted sequence, a crowd of film extras shuffles to and fro, under the barked orders of the film unit, playing Jews being herded to a concen- tration camp; then the boy is hauled from the ranks to take the role of a nazi guard. It takes real film-making not only to get away with an effect as notionally blatant, but to transmit such a criss-cross texture of embarrassment and revulsion, as though the people on the screen were genuinely confronted with a moment of extreme emotional bafflement. Not all of Father is stretched as tight as this, and some of the childhood fancies are only day-dreaming. When it's good, though, Szabo's film is very good indeed.

Pearls of the Deep, the Czech half of the same programme, is made up of five short stories by Bohumil Hrabal, who wrote the novel Closely Observed Trains. Hrabal is an extra- ordinary writer, and his wry, menacing, low- key sketches about ordinary people and odd obsessions clearly defeat film-makers too easily tempted into baroque extravagance. The effect should be of a single distorting mirror, not a ) :!. whole fairground freak show. Of the five directors here, Vera Chytilova comes rather a cropper. But two episodes (Jiri Menzel's, about an eccentric and ageing quartet watching a motor-cycle race, and Jan Nemec's, about two old men in hospital and the lies they tell each other) are fascinating. The two directors use quite different means to reach the same end : the Czech (or Hrabal) effect, lucid and hallu- cinatory.