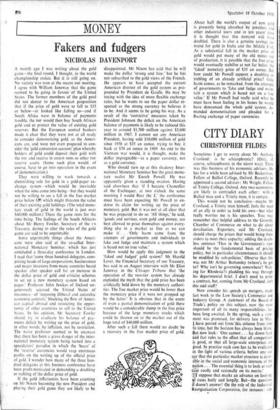 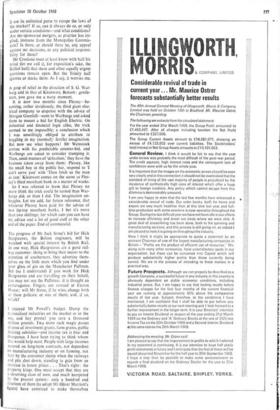 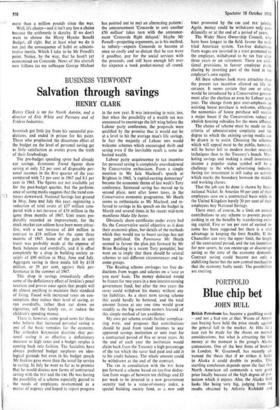 - Sometimes I get to worry about Mr Anthony . Crosland : is he schizophrenic? (Only, of course, schizophrenic in the nicest way). There was this business of his economic advisers. He has for a while been advised by Mr Beckerman, Fellow of Balliol College, Oxford. Recently he appointed a second adviser: Mr Wright, Fellow of Trinity College, Oxford. Any two economists are likely to contradict each other : with a Balliol man and a Trinity man, it is certain.

This would not be conclusive—maybe Mr Crosland, a Trinity man himself, feels the need of an ally in order to hold his own—but what really worries me is his speeches. You may remember that helpful address to the Grimsby Chamber of Commerce on what to do about devaluation. Exporters, said Mr Crosland, should charge the prices that would bring them orders to meet their capacity; adding the death- less sentence 'That in the Government's view should be the fundamental basis of pricing policy, but in particular circumstances it should be modified by sub-policies.' Observe that this was not Mr Arthur Bottomley (where's he got to? Why isn't he governing somewhere? Wait- ing for Rhodesia?) plodding his way through his departmental brief. I don't need to point a contrast, but, coming from Mr Crosland, isn't this odd stuff?

Now consider his speech on mergers, made last week to the Law Society's Commerce and Industry Group. A statement of the Board of Trade's policy on this subject, now the most important of all its many responsibilities, has been long awaited. In the spring, such a state- ment was promised, for delivery late in May.

thave peered out from 'this column from time time, but the horizon has always been blank. But now look : 'One cannot . .. lay down hard and fast rules to the effect that all competition is good, or that all large-scale enterprises ar:

good. In practice each case has to be evaluated

in the light of various criteria before one can say that the particular market structure is desir- able in the social and economic interests of the siation . The essential thing is to look at each

ease coolly and rationally on its merits.'

ti suppose that.marks an advance on look in at cases hotly and loopily. but—the question, ft doesn't answer! On the role of the Industn, Reorganisation Corporation, for instance: can it use its unlimited purse to escape the laws of the market? If so, can it always do so, or only under certain conditions—and what conditions? Are tac-sponsored mergers, as practice has im- plied, immune from the Monopolies Commis- sion? Is there, or should there be, any appeal against IRC decisions, or any political responsi- bility for them?

Mr Crosland must at least know with half his mind (let me call it, for exposition's sake, the Balliol half) that these and other equally urgent questions remain open. But the Trinity half ignores or ducks them. As I say, it worries me.

A gasp of relief in the direction of S. G. War- burg and in that of Kleinwort, Benson: gentle- men, you gave me a nasty moment.

It is now two months since Plessey—be- coming, rather invidiously, the third giant elec- trical company to dispense with the advice of Morgan Grenfell—went to Warburgs and asked them to mount a bid for English Electric. On industrial and financial logic alike, the trick seemed to me impossible; a conclusion which I was unwillingly obliged to attribute to boggling in my (normally fertile) imagination. But now see what happens! Mr Weinstock arrives with his predictable counter-bid, and W'arburgs are asked to consider trumping it. Then, amid mutters of 'defeatism,' they have the business taken away from them : Plessey, like the small boy in the public bar, respond to 'I can't serve you' with 'Then fetch us the man as can.' Kleinwort comes on the scene as Ples- sey's third merchant bank in a matter of weeks.

So I was relieved to learn that Plessey no more think the trick could be turned than War- burgs did, or than I did. The imagination un- boggles. Let me add, for future reference, that whatever Plessey have paid for the advice of two tip-top merchant banks, I bet it's more than two shillings; for which sum you can have my advice and a lot of good stuff at the other end of the paper. End of commercial.

The progress of Mr Jack Stone's bid for Hick Hargreaves, the Bolton engineers, will be watched with special interest by British Rail. In one way, Hick Hargreaves are a good rail- way customer: liking to bring their merits to the attention of southerners, they advertise them- selves on the little mats which you find under your glass of gin on the Manchester Pullman. But (so I understand) if you work for Hick Hargreaves and are travelling on their behalf, you may not use the Pullman: it is thought an extravagance. Fingers are crossed at Euston House: will Mr Stone, if he wins, change both of these policies; or one of them; and, if so, which?

I enjoyed Mr Powell's budget. Dump the nationalised industries on the market or in the sea, and hey presto! you save a thousand million pounds. Two more such magic passes dispose of investment grants, farm grants, public housing subsidies—and income tax is four and threepence. I have been trying to think whom this would help most. People with large incomes secured on long-term contracts, not dependent on manufacturing industry or on farming, not hurt by the consumer slump when the railways and pits shut down, standing to gain from an increase in house prices . . . That's right: the property kings. One must accept that they are a deserving class of men, and much hampered by the present system: only a hundred and fourteen of them (to adopt Mr Oliver Marriott's figure) have contrived to make themselves more than a million pounds since the war.

Well, it's choice—and it isn't any less a choice because the arithmetic is sketchy. If we don't want to choose the Harry Hyams Benefit Budget, all right. But at least what we do is not just the consequence of habit or adminis- trative inertia. Which I take to be Mr Powell's point. Notice, by the way, that he hasn't yet economised on Concorde. News of this aircraft now follows (as my colleague George Michael has pointed out to me) an alternating pattern: the announcement 'Concorde to cost another f50 million' takes turn with the announce- ment 'Concorde flight delayed.' Maybe Mr Powell—projecting arguments, as is his method, to infinity—expects Concorde to become at once so costly and so distant that he can wave it goodbye, pay for the social services with the proceeds, and still have enough left over for sixpence a week pocket-money all round.