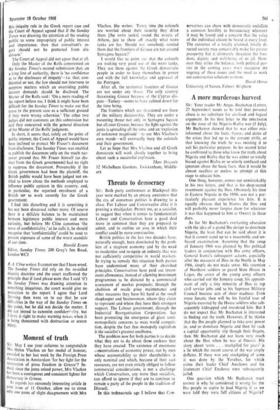 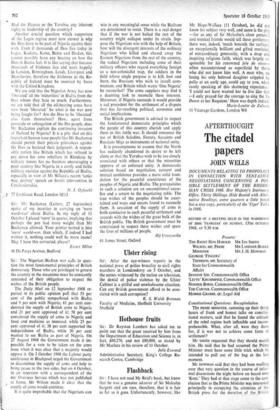 Sir: Your reader Mr Angus Buchanan (Letters, 27 September) needs to be told that personal abuse is no substitute for civilised and logical argument. In his first letter to the SPECTATOR on the issue of the Nigeria-Biafra war (5 July), Mr Buchanan showed that he was either mis- informed about the facts, figures and dates of the crises that led up to the present strife, or

that knowing the truth he was twisting it to suit his particular purpose. In his second letter he confirmed to those who know the truth about Nigeria and Biafra that he was either so totally biased against Biafra or so utterly confused and ignorant about the basic facts, that it would be almost needless or useless to attempt at this stage to educate him.

One thing, however, comes out unmistakably in his two letters, and that is his deep-seated resentment against the Ibos. Obviously his time in Eastern Nigeria in the 1950s was not a par- ticularly pleasant experience for him. It is equally obvious that he blames the Ibos and will probably never forgive them for whatever it,was that happened to him at Owerri in those days.

As for Mr Buchanan's everlasting obsession with the idea of a grand Ibo design to dominate Nigeria, the least that can be said about it is that it cannot stand up to a reasonable and un- biased examination. Assuming that the coup of January 1966 was planned by Ibo political leaders in conjunction with Ibo army officers, General Ironsi's subsequent actions, especially after the massacre of Ibos in the North in May 1966, simply do not make sense. His retention of Northern soldiers to guard State House in Lagos, the arrest of the young army officers who carried out the January coup, his appoint- ment of only a tiny minority of Ibos to top civil service jobs and to his Supreme Military Council become acts of sheer madness. Even more lunatic then will be his fateful tour of Nigeria escorted by the Hausa soldiers who sub- sequently kidnapped and murdered him. But I do not expect that Mr Buchanan is interested in finding out the truth. However, if he thinks that the lbo people planned to take over power

in, and to dominate Nigeria and then let such a capital opportunity slip though their fingers, then Mr Buchanan did not learn very much

about the Ibos when he was at Owerri. His story about 'arms . . . stockpiled for years' is

a lie which the recent course of the war amply deflates. If there was any stockpiling of arms it was done by the Yorubas, for which crime their leader Chief Awolowo and his lieutenant Chief Enahoro were subsequently jailed.

One question which Mr Buchanan must answer is why he considered it wrong for the Ibo people to aspire to lead Nigeria if as we were told they were full citizens of Nigeria?

Had the Hausas or the Yorubas any inherent rights to leadership of the country?

Another crucial question which supporters of the Lagos regime must now answer is why the Ibos have to be part of Nigeria against their wish. Even if thousands of Ibos live today in Lagos, Kaduna, Kano, Benin and Ibadan, this cannot possibly have any bearing on how the Ibos in Biafra feel. It is like saying that because thousands of Irishmen live and work happily in London, Birmingham, Leeds, Liverpool and Manchester, therefore the Irishmen in the Re- public of Ireland must be reunited by force with the United Kingdom.

We are told that the Nigerian Army has now `liberated' all the 'minorities' in Biafra from the Ibos whom they hate so much. Furthermore, we are told that all the oil-bearing areas have now been 'liberated.' So what is the war now being fought for? Are the Ibos to be 'liberated' also from themselves? How, apart from genocide or subjugation of the Ibo people, does Mr Buchanan explain the continuing invasion of Iboland by Nigeria? It is a pity that on this important human issue people like Mr Buchanan should permit their private grievances against the Ibos to becloud their judgment. A respon- sible nation like Britain which has refused to put down her own rebellion in Rhodesia by military means has no business encouraging a poor country like Nigeria in a costly and futile military exercise against the Republic of Biafra, especially in view of Mr Wilson's recent 'tanks may destroy' speech on Soviet intervention in Czechoslovakia.